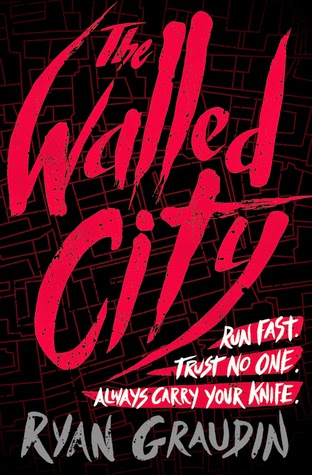 DAI, trying to escape a haunting past, traffics drugs for the most ruthless kingpin in the Walled City. But in order to find the key to his freedom, he needs help from someone with the power to be invisible....

JIN hides under the radar, afraid the wild street gangs will discover her biggest secret: Jin passes as a boy to stay safe. Still, every chance she gets, she searches for her lost sister....

MEI YEE has been trapped in a brothel for the past two years, dreaming of getting out while watching the girls who try fail one by one. She's about to give up, when one day she sees an unexpected face at her window.....

In this innovative and adrenaline-fueled novel, they all come together in a desperate attempt to escape a lawless labyrinth before the clock runs out.

I was pretty apprehensive about this book at first, when I read the summary months and months ago. But I really enjoyed Graudin's All That Glows, so I added this on to my TBR list. Flash forward a couple of months, and Jessica at Lovin Los Libros sends me a copy of this book! She's the greatest.

This book follows the perspective of three teenagers - Jin, Dai, and Mei Yee. Jin is a street urchin pretending to be a boy. She is a fast runner, so she delivers things. Really, she is looking for her sister, who was sold and taken away from her years ago. Dai is a rich boy pretending to be a street vagrant. He takes jobs from the Brotherhood (think: mafia), but really, he is trying to gain access to information that will bring them - and the Walled City - down. Mei Yee is a prostitute of the Brotherhood's brothel. Longwai (head of the Brotherhood and this brothel) basically runs the city, and there is no escape for anyone.

I'm not a huge fan of multiple perspectives - more than two is usually too many for me. However, I really liked this aspect of the book. Each teenager is so different, and has a different role to play. Dai and Jin intersect pretty quickly, but Mei Yee doesn't interact with either of the other two protagonists until later in the book. So it's not about each character seeing the same scene through different eyes - because most of the time, each character is in a different place at different times.

Dai finds Jin because he wants Jin to do a job with him, for Longwai (the Brotherhood kingpin). Dai is trying to get closer to Longwai so that he can get information on the Brotherhood. Jin wants to hind her sister, and she is completely sure that her sister is in the brothel. So this is how those two meet. Dai is under the impression that Jin is a boy - but not for the entire book. It's actually pretty interesting how he finds out. Reminds me of a certain Disney movie.

Jin's is the first perspective we read from, so she was the one I latched onto first. Usually the first protagonist introduced is my favorite - and she definitely was my favorite. She is fearless and brave, but not without flaws and faults. Her devotion to her sister is very admirable. After years, she still hasn't given up hope.

I liked Dai next. He's an interesting character, tormented by his brother's death, his brother's words to him. Dai doesn't think that he is a good person, but he is. He really is. He wants to protect and save so many people, even though he knows better - you just don't do that in the Walled City.

I liked Mei Yee the least, but it wasn't really her fault. Her character is very stagnant, so I just wasn't as interested in her story as I was interested in the other two characters' stories. However, again, not her fault, since she is locked in her room in a brothel all day, waiting for her special guest to visit her when he pleases. It's so heartbreaking, her life, but I feel like she never really gives up. She's just sort of there for a while, but she isn't broken.

The world-building of this book is really important and really great. I kept wondering how Graudin would make the world-building unique (a walled city seemed very cliche and overused?) - but I like how well Graudin developed her Walled City! There is so much culture and rules and dangers. The city is no joke at all. Graudin crafted the setting well indeed!

The plot is definitely intriguing - I never stopped reading, and was never bored. In fact, I couldn't put the book down, and finished it in one sitting. Definitely a good sign, especially when it comes to long books.

I believe this book is a standalone? It definitely ends like a standalone, and I would love for it to "stay" a standalone. I really enjoyed this story!

I feel like things were just a little TOO perfect, in terms of how everything wraps up. Like, from the beginning, the reason why Dai is doing all that he is doing... everything is just so coincidental and lucky. Would everything have fallen into place like that if one small thing hadn't happened? I know real life totally works like that, but it messed with my head. The plausibility seemed a tad bit off to me. But then again, this is a fantasy world. I think it's fantasy? It's based on a real city in China, I believe.

I would recommend this one! I'm having a hard time pinning down the genre - it seems kind of dystopia-like, but it's really not a dystopia at all. There is no government trying to make things seem perfect. But then, it doesn't really feel like a thriller, and it's not contemporary. I'm tagging it as dystopia and thriller, but honestly, I have no idea how to classify this book.

Which goes to show the uniqueness of the book, perhaps :D

4 stars. Well-deserved! This is a very original and fresh novel - I haven't read one quite so unique in a while! Props to the author!