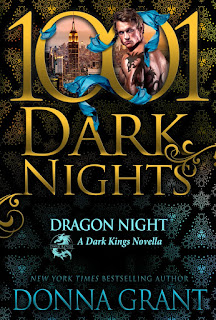 Governed by honor and ruled by desire

There has never been a hunt that Dorian has lost. With his sights sent on a relic the Dragon Kings need to battle an ancient foe, he won’t let anything stand in his way – especially not the beautiful owner. Alexandra is smart and cautious. Yet the attraction between them is impossible to deny – or ignore. But is it a road Dorian dares to travel down again?

With her vast family fortune, Alexandra Sheridan is never without suitors. No one is more surprised than she when the charming, devilish Scotsman snags her attention. But the secrets Dorian holds is like a wall between them until one fateful night when he shares everything. In his arms she finds passion like no other – and a love that will transcend time. But can she give her heart to a dragon??

**Every 1001 Dark Nights novella is a standalone story. For new readers, it’s an introduction to an author’s world. And for fans, it’s a bonus book in the author’s series. We hope you'll enjoy each one as much as we do.**

I've read a previous 1,001 Dark Nights novella by this author, of this series, and I LOVED it. When I saw the review opportunity for this book, I wanted in. One day I will read the non-1,001 Dark Nights books. But for now, I'm really enjoying the novellas. This one was fantastic!

Dorian, one of the ancient Dragon Kings, has been asleep longer than any other Dragon King. Years ago, his hatred for humans led him to decide to sleep indefinitely when the wars were over. But now, years later, he is awakened by the King of Kings, Constantine. Con needs his help to steal an artifact that could aid the Dragon Kings in the war against an ancient foe. Dorian hates humans and wants nothing to do with them, but his unique ability of invisibility makes him the perfect candidate to steal the artifact. But things don't go according to plan when Dorian meets Alexandra Sheridan, the heiress who has the artifact. Alexandra knows there is something different about Dorian, but that doesn't stop her from wanting him more than she has ever wanted someone. Little does she know that her life about to change.

This story went by incredibly quickly! I could not put it down. I couldn't read fast enough. Dorian's heartbreaking backstory, and Alexandra's loneliness, made the story so much more intense and engrossing. I loved their love story, but I also loved each of their backstories.

Dorian and Alexandra are both similar in that they keep to themselves, on purpose. They suffered greatly in their past, and their power and status make them targets in their communities. Alexandra is a rich heiress who doesn't date anyone or let anyone close to her. Dorian is an ancient Dragon King who suffered great loss at the hands of humans and for that, hates all humans. Dorian and Alexandra are an unlikely pair, but that is exactly what makes them irresistible as a couple.

How they meet: Alexandra does a lot of charity work, and one event she does every year is a bachelorette auction, in which she is bid on, and the highest bidder gets to take her on a date. The money does to a charity. This year, a handsome and mysterious Scotsman (with a sigh-inducing accent!) outbids everyone - by a lot. Dorian appears to be different than previous dates - he doesn't seem to be after her money, or trying to seduce her.

But their attraction is pretty much instantaneous. The chemistry between Dorian and Alexandra is off the charts. I love that about Grant's books! You can pretty much expect a ~fiery~ hot read (makes sense, given that we're dealing with dragons). This is a novella and therefore shorter than a full-length novel, but the chemistry was super hot. The steamy scenes were hot. So much steamy!

At the same time, you could see Dorian and Alexandra's shifting feelings for each other. Dorian began the book hating humans, but Alexandra changed that. His rage and thirst for vengeance cooled. Alexandra was lonely and sad, but Dorian changed that.

Did I mention how much I adored Dorian yet? No? Dorian is a tortured sweetheart that I could not help but fall for. He is filled with rage and grief, and he wants so badly to torch the earth and kill all the humans. What he needed was healing, and he got that with Alexandra. Dorian is a charming, brooding, mysterious guy - the definition of tall, dark, and handsome. And broody.

I love that, when Alexandra found out that Dorian was after her artifact, she didn't storm out of his life. Hear me out. She got very angry - and justifiably so! Everyone wants something from her, and she thought Dorian was different. So she was angry. BUT she evaluated her feelings, and his actions, and she realized that he never tried to hurt her, and he could have taken the artifact at any time, but he didn't. I like that she thought things out and went to talk to him - rather than declare him dead to her and out of her life. This is a very rational response on her part and I liked that.

Shout-out to her assistant Meg, who helped Alexandra in many ways, but especially when it came to the decision to talk to Dorian. Meg is so supportive and patient, and a good friend to Alexandra (even if she is an employee of Alexandra).

To sum things up - I really enjoyed this book. It was a refreshing read that pulled me out of my reading slump (I hope it did). The ending is really sweet and a great HEA. I love HEAs and I'm so glad Dorian and Alexandra have theirs. I am hoping to read the next book in the series soon (it publishes at the end of October) and I am crossing my fingers for a Dorian/Alexandra cameo!

Nothing to say here, except maybe that I wish there were more pages for me to read and enjoy!

I highly recommend the Dark Kings series in general! But in particular, these Dark Kings novellas published in the 1,001 Dark Nights collections. Dragon Night was fantastic - unputdownable, mesmerizing, and very sexy. Who doesn't love dragons? Especially sexy ones.


5 stars. Another great read by Donna Grant. I can't wait to read her next book in the series. It publishes soon!