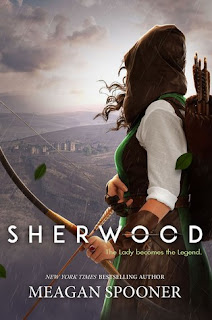 Robin of Locksley is dead.

When news comes that he's fallen in battle at the King's side in the Holy Land, Maid Marian doesn’t know how she’ll go on. Betrothed to Robin, she was free to be herself, to flout the stifling rules of traditional society and share an equal voice with her beloved when it came to caring for the people of her land.

Now Marian is alone, with no voice of her own. The people of Locksley, persecuted by the Sheriff of Nottingham, are doomed to live in poverty or else face death by hanging. The dreadful Guy of Gisborne, the Sherriff’s right hand, wishes to step into Robin’s shoes as Lord of Locksley, and Marian’s fiancé. Society demands that she accept her fate, and watch helplessly as her people starve.

But all of Nottingham is crying out for a savior. So Marian must choose to make her own fate and become her own hero...

I have read nearly all of Spooner's books and enjoyed them! Her Skylark series, her Starbound series, Hunted, and Unearthed. Hunted is my favorite book of hers. I cannot wait for this new standalone!
Posted by Alyssa at 12:00 AM