Review: Knuckle Down by Chantal Fernando 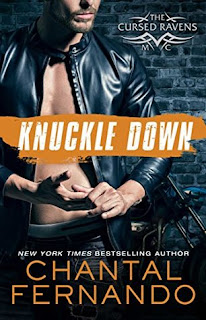 A single father struggles to change for his daughters and the woman he loves in this second book in the Cursed Ravens Motorcycle Club series from New York Times bestselling author Chantal Fernando.

As a single father of two girls and the sergeant at arms for the Cursed Ravens Motorcycle Club, Jack “Knuckles” Chester doesn’t have much free time. And having earned his road name from his reputation as a fighter, Knuckles isn’t one to back away from a challenge.

But what he'll never admit out loud is that his two daughters have changed him irrevocably, softened him even. And these two girls are the only women who will ever hold his heart forever. That is, until he meets the cousin of another biker’s old lady.

Celina is nothing like the women Knuckles used to date. She’s a journalist for the local newspaper, dresses well, and basically just has her life together. And the last thing she wants is to be involved with a Cursed Raven. But when the ripped, badass biker worms his way into her heart, she has trouble remembering all the reasons they would never work.

But when a scandal at her newspaper breaks the thin trust she has with Knuckles, will she walk away for good? Or will Knuckles fight to keep Celina in his life?

This book was an honest-to-goodness roller coaster. It had a little bit of everything in it. There was a tough, guarded heroine, a sexy and sweet hero, his two daughters, some baby mama drama, arrests, pregnant strangers, sabotage, plagiarism (our heroine is a journalist)... there was a lot going on, in this book. I'm still trying to decide how I feel about everything. I know I didn't like this book quite as much as I liked Ace of Hearts. That book had a fresh, sexy feel to it. This book involved a lot more drama, and I don't really care for drama. But I did like the protagonists. There were plenty of things to like, but plenty of things that I didn't care for, so I'm torn!

Celina is Erin's cousin (Erin is the female protagonist of Ace of Hearts). Despite her and Erin's age difference - Erin being in her early twenties, Celina being in her late twenties - she and Erin are very close. When Erin invites her to her birthday party at the Cursed Ravens clubhouse, Celina isn't going to say no. There she meets Knuckles, the MC's "protector", and Erin's and Ace's friend... let's just say neither Celina nor Knuckles had a chance, after meeting each other. But both of them have been burned by previous partners, and both of them have trust issues. When Celina's job as a journalist interferes with their fragile trust, she and Knuckles will have to decide if it's game over between them. Celina runs when things get difficult, and Knuckles hides behind his temper. But they both can't hide their feelings for the other, and they both will fight for what they have.

Knuckles was one of my favorite characters from Ace of Hearts, so it was no surprise that I really loved seeing him in a closer light. He's the rough-and-tumble protector of the MC - hence the nickname - but he's also a teddy bear sweetheart. He has two girls - Willow and Westley, around the ages of nine and thirteen, and he loves them dearly. Despite his relationship with their mother Flora not working out, Knuckles has kept things cordial with Flora, and he has gone above and beyond for his daughters (more than Flora). Knuckles is kind and persistent, protective and genuine. He's loyal and honest and just a good person all around.

I loved his relationship with his girls, and I loved the girls too. Usually I do not go for romance novels that feature the hero or heroine with children from a previous relationship. I do not like romance novels with children involved, or surprise pregnancies. But I liked Willow and Westley a lot, and I was pleased with their growing relationship with Celina. She accepted them as Knuckles' children, and she also didn't try to become their mother.

Celina is a tough nut to crack. She has so many walls up because of her last relationship (mind you, she was in a relationship with someone who is still a coworker, which is awkward). She doesn't let anyone in, so it's a miracle that Knuckles got past her defenses. Celina is a strong independent who don't need no man, but she finds one anyway, and he's a strong equal and complement. I liked Celina, I didn't like Celina. Let's put it this way - I liked her sometimes, and other times, I wanted to press her mute button. She was annoying sometimes - her logic didn't always make sense. She passed blame around and didn't accept any, and this always gets on my nerves. But she wasn't all bad, and I definitely see why Erin admires her so much.

As far as Knuckles and Celina's relationship goes, I'd say they are a great match. He's a tough alpha male (though not an alphahole), but also a sweet protector and caregiver. Celina is a tough woman who is guarded but also loves with her whole heart. They get comfortable and peaceful with each other fairly quickly, because they clicked fairly quickly. Their personalities fit together, and their chemistry definitely did too.

I want to say that Ace of Hearts was steamier, but this book had its fair share of sexy times. I feel like the author didn't write out as many though - there were a lot of fade-to-black sexy times.

I said this earlier, but this book was a roller coaster! There was a ton of drama, and a ton of events occurring back to back. You'll have to read the book to see what I mean. But the plot didn't stop until the very end, when the book was over. The ending was a very cute HEA, which is always a good thing. There was a lot going on, but a good HEA makes up for a lot.

There was a lot of drama in this book, and I personally don't like too much drama in romance novels. For one, Knuckles has a baby mama, and while she doesn't show up for most of the book, she does show up towards the climax, and she's a mess. There is some baby mama drama and it felt so unnecessary and petty. It didn't belong in the story.

And then there was another thing that presented some drama, which I won't talk about because it's super spoiler-y. That thing also felt a little unnecessary, though I do understand why the author worked that trope into the story. It just felt sudden and also near-impossible.

And of course, this book features two protagonists who experience second love with each other. Each of them dealt with lying, cheating exes, before meeting each other. I have nothing against second love romances. It's second-chance romances that I don't like. But somehow, this second love romance had a little too much drama for me. Leave the exes out of the story. But sides of exes felt unnecessary to the story.

I mentioned above how I didn't always like Celina. Sometimes she was irritating. She didn't know how to accept blame, or accept the fact that she was also at fault and also needed to apologize. Knuckles shouldn't be the only one swallowing his pride, at the climax. She needed to fight for him just as much as he fought for her, because the issue was mostly HER fault (not his). He reacted badly, but anyone would, when what Celina did came to light. I felt bad for her because she didn't do everything wrong, but in the end, she should have also been apologizing and trying to win back Knuckles, and not just the other way around. This really irritates me, when it's only the man groveling and begging, but it's the woman who is at fault and should be begging.

I felt like there wasn't as much involving the motorcycle club, in this book. Perhaps because most of the book was spent at Celina's house or away from the clubhouse. I liked how Ace of Hearts showed life inside the clubhouse, and the brotherhood, and the motorcycles. This second book could have been a non-MC-romance novel, honestly.

I highly recommend book one, Ace of Hearts. It has basically no drama, no baby mamas, no [insert trope here that I absolutely hate], no children (not that I minded Willow and Westley), and the heroine (Erin) was likable in her entirety. This book... I don't really recommend it like I would the previous book, but it wasn't that bad. Mostly it just wasn't for me.

3.5 stars -> rounded down to 3 stars. I feel positively towards this book, but I just didn't love it like I loved Ace of Hearts. I am really excited about Going Rogue though. Rogue is so dreamy, and I LOVE the sweet nurse + alpha bad boy trope. I can't wait!