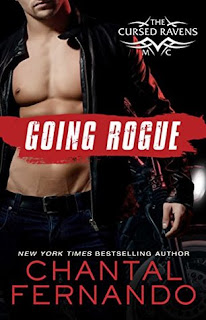 Love blossoms in the most unexpected of places in this sweet and steamy Cursed Ravens Motorcyle Club title featuring a hunky bad boy and a charming nurse.

The men might tease Rogue and call him pretty behind his back, but no one is going to say that to his face. As the vice president of the Cursed Ravens—and with an unpredictable and unruly temper—respect is given to him at any cost.

But Rogue reins himself in when visits his mother in a local nursing home. Overwhelmed with guilt that he can’t take care of her himself, he can barely handle watching her fade away with dementia. And he knows the staff is exceptional—especially the sweet and beautiful caregiver who pays extra attention to his mom.

It isn’t easy working at a nursing home, but Zoe enjoys spending time with her favorite patient Anne. She knows Anne has a son who dutifully visits her, but when Zoe sees the tall, muscled, handsome stranger, she can tell he’s trouble—beautiful trouble. She knows he’s a Cursed Raven and she knows better than to admit she’s attracted to him. There’s no way her brother will let her hang out with a rival MC member. But as Zoe and Rogue start to get closer, they realize one way or another, they’ll have to fight to stay in each other’s lives.

I read books one and two last week, both of which have not been published, and I had been wondering how long it would be before the third book (Going Rogue) would appear on Edelweiss, as its predecessors had. Lo and behold, not two days later, this book showed up on the site, and I downloaded it immediately. I'm jumping the gun here, in posting the review for an August '18 publication in May, but I couldn't wait. I really enjoyed the first two books in this series, and I'm happy to say that I liked Going Rogue.

Rogue is the VP of the Cursed Ravens club - he's the backbone of the club, and the one who shoulders much of the responsibility. He always seems to have a lot going on, from helping his club brothers with their new babies, to taking the lead on club deals, to watching his mother wither way in an old-age home, suffering from dementia. It's there that he meets Zoe, the nurse who takes care of his mother. Zoe always knew Mrs. Kennedy had a son, but she never knew he was a tall, darkly handsome, very muscular man with wicked charm and quiet, lethal power. It's lust at first sight, but both of them will quickly start to realize how far they'll go for the other.

I adored Rogue in the first two books, and could not wait for him to get his own book. It's unfortunate that this book is written exclusively from Zoe's first-person POV, but Rogue is still so present and so swoony - it didn't matter that his POV wasn't featured. He dominates the book from start to finish. Rogue is deadly and precise when he needs to be - as the VP of the MC, he has to be. But he's also thoughtful, sweet, and considerate. He's good with babies (none are his own - they're  his "nephews"), and he's a sweetheart of a boyfriend. And he can sing and play the guitar! Throw in the muscles and pretty face, and you've got the full package. (That too. *nudge nudge*)

Zoe is the perfect complement. She is sweet and gentle, which is great for her profession. She has a kind heart and a lot of patience. Mrs. Kennedy (Rogue's mother) likes her a lot, because she is so kind and considerate. But Zoe isn't a passive person; she knows her mind and she's very sassy too. She isn't as aggressive as previous heroines (I don't say "aggressive" in a negative way, mind you), but she isn't passive either. She fits Rogue very well.

The two of them together are fiery hot but also richly sweet. They are a great pair. They have instant chemistry, but they also mesh together well in terms of personalities. Both of them are very selfless and giving.

In terms of the romance, as always, the pair have hot chemistry and this leads to very sexy sexy-times. I only wish there were more sexy times on page! Rogue is super yummy, a "good" type of alpha male. Zoe is sweet and assertive too, and that dynamic works for the pair.

There are a lot of cameos from the MC members, such as Ace, Knuckles, Shack, and the president. Erin and Celina are very present as well, and there is some surprises along the way involving some of the ladies and gentlemen of the club. I love how the author kept us readers in the loop with the rest of the club. The whole gang is so fun and get along so well.

I have to mention the strong sisterhood that emerges, in this book. Erin and Celina are cousins and always had each other's back, in the previous books. Zoe and her older sister Vanessa are an even stronger pair. But the four ladies together are unstoppable and unshakable. I love how quickly they all become friends and how well they get along and support each other.

The same can be said about the men in the MC. Ace, Knuckles, Rogue, Shack, and Prez have a close bond - especially Ace, Knuckles, and Rogue. They support each other and keep the brotherhood close. Loyalty is everything to these men, and it really shows, in the story. The MC aspect of the story (and series) is alive and well in this book.

The ending is such a wonderful HEA! We get a peek into everyone's future, in the epilogue. But I especially loved Rogue and Zoe's ending. Theirs was hard-fought and almost had a tiny bit of bittersweet something to it, but they worked through their issues. I love how communication is a big part of the resolution, and how quickly the couple works through their problems. This is so important to see, in romances. Anyway, the ending was really satisfying. I'm sad that the series is over (at least I think it is), but I loved the ending.

I guess there could always be more sex (ha!), and I'm also sad that the series is over. Could Vanessa get her own book, maybe? She is HILARIOUS. I relate to her - I'm not as dramatic as she is (she is awesome, "dramatic" isn't a bad thing), but I'm probably as sassy and exuberant, so I think we'd get along.

I highly recommend this particular book (it's so sexy and sweet!), but also the entire series. There are so many great aspects of the series. Yes, it's a motorcycle club romance and those always have the rough-and-tumble appeal. But there is also a strong brotherhood, a growing sisterhood, slow-burn sexy romances, tough heroines, swoony heroes... I really enjoyed this series.

4 stars. I'm so sad that the series is over. Part of me is hoping that Vanessa gets her own book. Given that the epilogue of this book goes somewhat ahead into the future, I'm not sure her book would be a thing, but maybe a novella? It would be nice. I adore Vanessa!