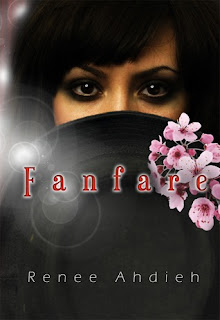 All Cris Pereira wants after being dumped at the altar is a do-over, but her life is not the average fairy tale and wishes don't come true in the real world. After she meets movie star Tom Abramson, she's determined not to fall for his intelligence, charm and impetuousness because dreams are for the foolhardy, and a modern girl can rescue herself.

I know what you're thinking - you're probably like, what is this!? Renee Ahdieh book published before The Wrath & The Dawn?! No way?! Yes way! Fanfare is Ahdieh's publishing debut, though it's an adult fiction novel, so The Wrath & The Dawn is Ahdieh's YA debut in truth. I found a used paperback copy of Fanfare online and couldn't help but purchase it for my beautiful Ahdieh collection. Never mind that the book has been out of print for years and the paperback copies are rare and somewhat expensive. I got mine for fairly cheap and I love it. The story itself was pretty good! Not amazing but I can see the roots of Ahdieh's talent.

Cris Pereira just got dumped, and not in a thank-goodness-it's-finally-over type of way. She is really not interested in love, but love has a mind of its own. Meeting Tom Abramson, the sexy, successful British movie star is one thing, but falling for him and him falling for her is another. She doesn't need him to heal her broken heart. But what if she wants him?

The concept of this novel is very cute. There is an adorable meet-cute, in which Tom is signing autographs and Cris's two young cousins wants to meet him, but are too nervous. Cris accidentally leaves her iPod behind, and Tom snags it and leaves his phone number. And that's the meet-cute! I love a good meet-cute.

I should mention that this is an adult novel, not technically YA, but the crossover is there. There is nothing too "risque" about this book - it's more so that the hero/heroine are not teenagers. But it's a fairly "clean" adult romance novel (like not explicit sex scenes), though there is occasional swearing.

Cris is just like any of Ahdieh's heroines - sassy, spunky, and not in need of saving (even if she should want to be saved every now and then). She is trying to move on from her recent breakup, and she doesn't want to need another man. But Tom is different, even if he is a hot and famous movie star. Would it be so bad for a good man to care about and for her?

Tom is a sweetheart! Usually I don't go for books with famous people, like actors or rockstars or politicians, and I wasn't expecting to really like Tom. But he is a sweetheart and a good man. He is kind and selfless, and very honest. I feel like all of Ahdieh's heroes are different, but they have the same strong, honest core. I love this.

The romance is cute! Tom and Cris are cute together. Cris has a lot of personal baggage to work through, so the romance is a bit slow at times. But Tom is nothing short of a gentleman and a sweetheart - so caring and understanding. He never pushes her, though he does ask for honesty. I think this is a good balance - never forcing her, but also not wanting her to stay stagnant and stuck in the past.

For much of the book, Cris is able to keep a low profile, but of course when you're dating a famous guy, the paparazzi has their ways of finding out things. Cris hates being in the spotlight, and it's something she has to come to terms with throughout the book. Does she want that kind of lifestyle?

I love the climax of the book, and the ending. I won't say too much, but I love that it involves Cris running to Tom, having her come-to-Jesus moment. She is the one that messed up, and she is the one that asks forgiveness. She never wanted a knight in shining armor, and so she must be her own knight. I love that she went and fought for Tom, because she was the one that needed to do so.

The ending is very sweet! It's a great HEA. Never fear with Ahdieh and HEAs.

The concept of the story is so great, but the execution is incredibly cheesy. You can tell that this is Ahdieh's debut novel and you can see how much her writing has matured in the four years between this book's publication and the publication of The Wrath & The Dawn. I'm knocking off two stars because the writing and structure of the story was so cheesy at times. It just wasn't as flowery and melodic as Ahdieh's subsequent books, which is what I've grown used to. I'm so glad for Ahdieh's growth as a writer, but I'm also a little surprised at how not-well-written this book was. It's like it was by a completely different author! Though I can definitely see the beginnings of Ahdieh's talent.

I also wanted Cris to take a little more responsibility for her actions. This could be noted in several occasions. For example, Tom ended up getting punched in the face by this massive guy, because Cris picked a fight with the massive guy's girlfriend. Cris took very little responsibility for this event. What's more, she acted like it was Tom's fault for getting hurt, when it was clearly her own for instigating the event in the first place. This wasn't the only time Cris didn't take responsibility for her actions. BUT I will say that Cris redeemed herself in the end, by being the one to beg forgiveness for her actions. So the character growth is there, I supposed. I just needed to see a little more of it, earlier on.

I'm not sure I'd recommend this book in terms of the story - it's not that great, though it is entertaining at times. Tom might be a little too much of a saint, and Cris might be a little too cautious and stuck in the past, but both characters show good character growth. The thing is, I wouldn't read this book for entertainment value; I'd read it to see how far Ahdieh has come, as a writer. It's interesting to see how she started out, having read three of her YA books that have been published (Smoke in the Sun to be published in June!).

3 stars. This wasn't a bad story! I've read it twice and I did enjoy it. It was cheesy and somewhat poorly written, but entertaining at times. I'm glad I had a chance to read it and add the book to my collection. I love finding these out-of-print copies!