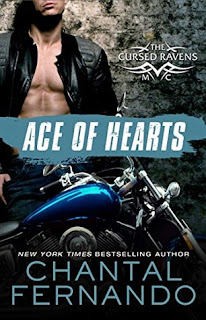 Erin Dawson had the perfect life growing up in a perfect home with a perfect family. Her parents gave her and her sister everything a child could want. But after learning that the man she’s called “dad” her whole life isn’t actually her biological father, Erin is determined to find the man who is.

Armed with her original birth certificate, she finds her father, but begins questioning if her mom had been right all along to keep this information buried. It turns out he is the president of a motorcycle club, which could not be further from the life Erin leads. But, she’s determined to get to know the man who she gets her striking blue eyes from. Despite getting what she wants and finding her biological father, it’s the slightly older, much rougher but incredibly sexy biker Ace that catches Erin’s eye.

As the new “princess” of the Cursed Ravens, Erin is learning a whole new world, but her father has made it clear she is off limits. Will Ace follow his President’s orders or will he put his heart ahead of his duty? A sizzling tale of family and passion, Ace of Hearts features Fernando’s signature “snark and sass” (Booklist) and is perfect for fans of Kristin Ashley.

This was an impulse read for me. I'd not heard of the book. I'd not heard of the author. But I stumbled upon this book on Edelweiss, and it sounded interesting, so I thought about giving it a chance. I've been in a massive reading slump for weeks, and the thought of just reading felt like too much. I am so behind in my review copies TBR, and I haven't had the zeal to read anything familiar. This book was totally unfamiliar and I've seen absolutely no early feedback for it (within my blogging circles), so I had no expectations for the book. I am so glad that I decided to give it a chance, because it was fresh and untouched and very good. I'd not heard of Chantal Fernando before, but I can see what critics are talking about, when they refer to her signature snark and sass, and great storytelling.

This is the first book in a new motorcycle club (MC) romance novel by Chantal Fernando. This author has written previous MC romances, but this series is new and separate. In this first novel, the heroine Erin has recently found out that her father isn't biological father - her biological father is a member of the Cursed Ravens motorcycle club. Erin decides to meet her father in person, and finds out that he is not only a member, but the president, and he had no idea she existed. Erin is welcomed with open arms, and she is labelled as the princess of the Cursed Ravens. She wants to develop a good relationship with her father... and maybe the sexy, brooding, intense man who didn't stop staring at her when she first came to the clubhouse. Erin has a lot to learn, and it isn't all fun and games. Is the new lifestyle worth it?

This book is written exclusively in Erin's POV, which was slightly disappointing at first (I love reading romance novels written in dual POV, with the hero and heroine's narratives). But I got over that quickly, because I simply loved reading from Erin's POV. She is sassy, tough, and bold. She says exactly what she means, and she doesn't play games. She goes after what she wants and doesn't let anyone sway her. There are times when she is vulnerable and unsure of herself, and I liked seeing this softer side of her. The tough, snarky side of her is so likable, too. She isn't rude and abrasive, but she does stand up for herself.

I adored Ace and so wish we could have gotten to read from his POV (though again, it was okay because I loved reading from Erin's). Ace comes across as the silent, brooding type. He is protective and alpha but not in an alphahole way. He is traditional is some ways, but very respectful and aware of Erin's boundaries. He doesn't push her, and he definitely doesn't want to go against her father's wishes (that no one touch her - she's off-limits). Ace is the blond-haired, grey-eyed sexy Viking that all the girls want, but he isn't an alphahole. He's a good guy with a lot of charm and broodiness.

I love the forbidden romance! Erin is supposed to be off-limits to all of the motorcycle club members, but she can't stop her attraction to Ace, and he can't stop his attraction to her. Their connection is undeniable, and they aren't the only ones that notice it. The tension builds as they risk more, and the chemistry gets steamier and steamier. Fernando does an excellent job of raising the tension and keeping the chemistry sizzling.

The chemistry is steamy and the romance is steamy but also very sweet. Ace and Erin are a cute couple who just click, and they get along very well. They are compatible in many ways, and it shows throughout the story. There is an age gap - Ace is twenty-eight, Erin is twenty-one - but they fit together regardless. Erin fights for her man and Ace fights for his girl, and this made me so happy.

I loved so many of the secondary characters! Gage (Erin's dad) is a complicated man, but you could see he was really trying to be a good dad to her. Knuckles is hilarious and adorable - a good friend to Erin, even if he is a big MC enforcer with two daughters. Rogue is probably my favorite (behind Ace), and I can't wait to read his book (book three, coming out in August). The MC members made this book even more worth reading - they're hilarious and also really good guys.

The conflict involves the forbidden romance, but also several attempts on Erin's life. Someone is trying to kill Erin, but how could it be a club member? There are several twists and turns to the ending. But the ending is a HEA for Ace and Erin. Things wrap up really well, which I wasn't quite expecting (Erin is doing one life path and Ace is doing another - but they end up compromising and it works out really nicely). I loved the ending. You all know how picky I am with happy endings!

Nothing specific! Perhaps more steamy scenes (and not just the alluded ones)? You can never go wrong with more written-out steamy scenes!

If you like MC romances, this is definitely one to try. I was laughing at Erin's snark constantly, I was swooning over Ace, I was sighing and fanning myself over Ace and Erin's chemistry, I was dying to see what comes next after the climax rolled around. There is a tiny bit of angst, but it's the best angst possible, and I loved it. I usually hate angst, so you'll have to trust me on this. No love triangle, very little drama, and a little angst. It was a great story!

4.5 stars. I actually came across this book when I found book two on Edelweiss, and I read the first sentence and immediately decided not to read book two (Knuckle Down). The hero has two daughters so I was like NOPE, I don't read romance novels with children involved. But having read this book, which had the hero of book two featured, and the heroine of book two, I might actually read Knuckle Down. I loved Knuckles in this book, and I am curious to see what kind of match he and Celina will be. So perhaps I will read it!