Review: The Pirate & I by Katharine Ashe 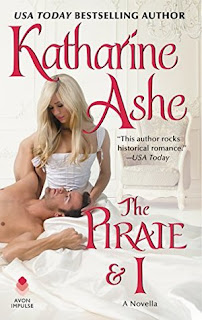 Then he disappeared without a word.

The last thing Esme ever dreamed was to meet Charlie again —

In a dark alleyway —

In a drenching rain —

In a chase with the police —

Can she resist falling again, this time for the dangerous scoundrel he’s become?

This novella was an absolute delight to read. I'm up to date with the Devil's Duke series and I actually think this is my favorite so far. Not that The Rogue and The Earl were bad - but this novella was so fun and heartwarming. It has crossover with The Scoundrel & I, featuring Esme Astel (who is Gabrielle Flood's friend) and Charles Brittle (from the Brittle & Sons print shop at which Gabrielle worked). This novella is an excellent addition to the series but also a fine standalone story.

Esme Astel hasn't seen Charles Brittle in nearly two years, so imagine her surprise when he comes running down the alley on a rainy night, silently pleading with her not to give him away as the police search for him. Everyone thought he'd left for good, or was dead. As it would turn out, Charlie Brittle joined a ship two years ago, and then the ship was taken over by pirates, and he became a pirate by necessity. He is back - well, in Scotland - in order to complete a mission to get another pirate off his back. Esme has loved Charlie for years, and seeing him again is a dream come true. But he is full of mystery and danger, and not quite the same man from two years ago. And her current dream is to live in Paris as an apprentice to a perfumer. In this story, dreams come true for both Esme and Charlie, in the sweetest and most hopeful of ways.

From the start, this book is full of sweet romance and yummy tension. You can practically feel the chemistry between Charlie and Esme, from the first pages and onward. This isn't a second-chance romance, though Esme and Charlie knew each other for years. Esme was secretly in love with Charlie for years, but she was sure that he was in love with Gabrielle - which is why he left. But Charlie has never loved Gabrielle like that, and he left for different reasons. During his years away, only one woman occupied his thoughts, the woman he was too shy to whom he was too shy to speak up.

Esme is a sweet and tough young lady, with big dreams and a big heart. She has always had a knack for distinguishing smells, hence why she has gone into the perfume business. She is in Scotland for a perfumer's meeting, and she hopes to get an apprenticeship with one of the perfumers of Paris. Then, she can starting saving money to move her two sisters and mother out of her wretched uncle's house.

Charlie is every inch a pirate - big, broad, unsmiling, up to some scheme, and running from the law. However, he is a good man, and though he denies it, a gentleman. He is selfless and caring when it comes to Esme and her family. He isn't an alpha male hero, but rather a seemingly hard yet sweet man who is protective to a fault.

The two of them together was always fun and sweet to watch. The romance was adorable and lovely. This was a novella so there weren't too many sexy times, but the few that were there were steamy and also tender. I loved every interaction between these two.

The story doesn't just deal with Esme and Charlie falling in love - there is a fun plot involving stealing a dog (whaaaaat), going to a brothel to find said dog (omg), and of course Esme trying to secure an apprenticeship with a perfumer. There is plenty going on besides the romance, though the romance is absolutely lovely!

One of the best aspects of this book was the lack of drama! You know how there is always drama between the couple, at the climax, in romance novels? There wasn't too much in this book, and any conflict was resolved in a sensible and sweet manner. Both characters went after what they wanted (each other), when they really realized what they left. In general, this book didn't have drama. I love how agreeable Charlie and Esme were. Esme knew what she wanted, Charlie knew what he wanted, they sometimes butt heads, but they also listened to each other. I loved that.

Props to Ashe for writing such a great story in a shorter page limit. I don't know what this says about me but I've really enjoyed her novellas, possibly more than her Devil's Duke full-length novels.

Of course I wish there were more sexy times! And I was also hoping to see Charlie confront his family (father and brother) at some point. That would have been symbolic of Charlie leaving behind the past and only looking forward (with Esme). But that's okay, I can come up with that scenario on my own and imagine a great resolution to that.

I definitely recommend the novellas that Ashe has written recently - this one, and The Scoundrel & I. Both novellas can be read as standalones, though they have crossover characters. They are fun, less dramatic, lacking miscommunication conflicts and forced conflicts, and very heartwarming. Also, I love how the novellas deal with "common" folk of historic England/Scotland, and not the nobility and the Ton. If you're looking for something different in historical romance...

4.5 stars. I'll round down to 4 stars for now. This book was incredibly fun and romantic and very much worth the read. If you're ever curious about Ashe's stories, try this one or The Scoundrel & I! Or her Prince Catchers series. And then go from there!