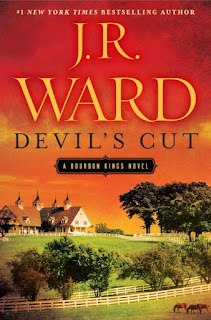 In #1 New York Times bestselling author J. R. Ward s thrilling finale of the Bourbon Kings series, the Bradford family dynasty teeters on the edge of collapse after the murder of their patriarch and a shocking arrest.

At first, the death of William Baldwine, the head of the Bradford family, was ruled a suicide. But then his eldest son and sworn enemy, Edward, came forward and confessed to what was, in fact, a murder. Now in police custody, Edward mourns not the disintegration of his family or his loss of freedom . . . but the woman he left behind. His love, Sutton Smythe, is the only person he has ever truly cared about, but as she is the CEO of the Bradford Bourbon Company s biggest competitor, any relationship between them is impossible. And then there s the reality of the jail time that Edward is facing.

Lane Baldwine was supposed to remain in his role of playboy, forever in his big brother Edward s shadow. Instead he has become the new head of the family and the company. Convinced that Edward is covering for someone else, Lane and his true love, Lizzie King, go on the trail of a killer only to discover a secret that is as devastating as it is game-changing.

As Lane rushes to discover the truth, and Sutton finds herself irresistibly drawn to Edward in spite of his circumstances, the lives of everyone at Easterly will never be the same again. For some, this is good; for others, it could be a tragedy beyond imagining. Only one thing s for certain: Love survives all things. Even murder.

I thought I loved The Bourbon Kings. I thought I loved The Angels' Share. I was wrong. I loved Devil's Cut so much and as much as I loved the previous two books, I loved this one more. So much love making the rounds. This final book in the Bourbon Kings series was absolutely stunning. Ward has written a true masterpiece to close out a fantastic series.

This novel picks up just about wear The Angels' Share left off. Edward has been arrested and is in jail for the murder of William Baldwine. Miss Aurora is fighting for her life in the hospital, due to cancer. Gin has married Richard Pford in a haste. And Lane - Lane is trying to dig Bradford Bourbon Company out of its current mess, though it has fallen so far, it may not be salvageable. Meanwhile, it remains unclear if Edward is actually the killer, even if he confessed to the murder. Secrets will be uncovered, revelations will be unveiled, scales will be tipped.

I don't even know where to begin with how much I loved this book. From start to finish, it captured my attention and I didn't put the book down until I was finished. Heck, I think I only shifted around to find a more comfortable position once, which is pretty rare (we bookworms know!). I was completely engrossed, desperate to know what would happen next. Ward has a way of weaving several plots together, ending one chapter on a mini cliffhanger and starting the next chapter in another character's POV. In other books by other authors, this could be distracting, but I loved how Ward set up the story. She kept me invested and wanting more!

This book is written in third-person, each chapter limited to one character's POV. Lane, Lizzie, Gin, Samuel T., Edward, Sutton, and Max are the main characters whose minds we get to peer into - though it is mostly Lane. This series has a large cast of characters but you won't ever get confused or forget a character - I don't know how Ward does it but she makes her characters (primary or secondary) seem larger than life, and unforgettable.

Lane is my favorite, though I adore Lizzie, and Edward. Lane is the former player, now the family's patriarch, the hero trying to save his family and the bourbon company from falling apart. He is stretched thin, with everything pulling him in all directions. Lane is a good Southern man with a good heart. I love how fiercely loyal and protective he is of his family, his legacy, and his love. Lane is the type of guy that makes me wish I could meet an old-fashioned yet progressive Southern boy who would sweep me off my feet. Good manners, selfless, with a little confidence and a lot of charm mixed in. Lane may have come from a super rich family, but he is good people.

Lizzie was part of the "help" - one of the gardeners of the Baldwines' estate. So in many ways she is the opposite of Lane, with a poorer upbringing and penchant for working with her hands. Lizzie is a sweetheart who doesn't like all of the drama that the Baldwine family has, but she would never leave Lane. She is perfect for him, and he her.

Their romance is so sweet and they had me sighing happily so many times. I love the direction of their relationship and the good things they have to look forward to in the future. Other romances that weren't huge in this book but got a resolution/HEA were Edward and Sutton's, Samuel T.'s and Gin's, and Max's (I won't specify his lady, but I loved this pairing!). And there was another but I won't say because that's a major spoiler. But good for her! She deserved it. I love how Ward put that relationship in this book as subtle as it was.

There is a lot of craziness that happens in this book, from abusive husbands to crazy ex-wives to shocking evidence from the murder to high-speed car chases to things involving babies/pregnancies. I hesitate to use the word "drama" but I've been throwing around the term "soap opera" when describing the other two books, so I guess "drama" does fit. It's the kind of drama that is riveting, not the kind that makes you want to scream and choke something. I was cheering for Lane to figure things out, about the company and the real murderer. I was cheering for Gin to stand up and leave her horrible new husband. I was cheering for Samuel T. for growing a backbone but also being a good man. I was cheering for Max for staying. I was cheering for Edward for doing what he did, though I wanted to shake him. You know what I mean? The drama was very good, even though sometimes it was sad (like Gin's situation).

I don't want to say more so as not to risk seriously spoiling things. But I will say that the ending is so perfect. Everything wraps up precisely and neatly, with HEAs for... most people. Well, 99% of the people. I love how Ward has set some things in place for these characters' futures, but not everything. That won't make sense unless you read the book, but basically, we get a peek into everyone's futures without seeing everything. I do hope Ward writes some sort of check-in epilogue in the future though. I adore these characters and I have a hard time letting go!

I recommend this book for anyone who likes this kind of contemporary romance - it's not sexy adult romance (though there is romance, and there is vague sex). There is soap-opera-level drama in this series and it's a series set in the South dealing with bourbon, so it's not a feel-good yummy romance series . It's sometimes dense and heartbreaking, but such a good series overall. If you've read either of the previous books in the series, definitely keep going. Ward finishes off the series in a very strong way. This book is easily my favorite, with how well Ward handles the story and treats her characters (both good and bad).

5 stars. Anyone who knows me knows that I rarely give out a five-star rating. But this book was so wonderful and I honestly can't think of a single thing I didn't like or wanted more of. Ward has outdone herself with this book. I'm glad this series is only a trilogy (not like her other series!) because I hate waiting for books to publish, but I'm also so sad to say goodbye to these characters. A true sign of an excellent series!