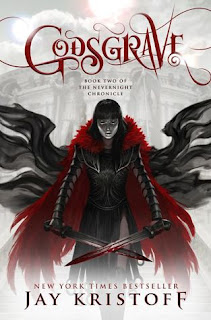 Assassin Mia Corvere has found her place among the Blades of Our Lady of Blessed Murder, but many in the Red Church ministry think she’s far from earned it. Plying her bloody trade in a backwater of the Republic, she’s no closer to ending Consul Scaeva and Cardinal Duomo, or avenging her familia. And after a deadly confrontation with an old enemy, Mia begins to suspect the motives of the Red Church itself.

When it’s announced that Scaeva and Duomo will be making a rare public appearance at the conclusion of the grand games in Godsgrave, Mia defies the Church and sells herself to a gladiatorial collegium for a chance to finally end them. Upon the sands of the arena, Mia finds new allies, bitter rivals, and more questions about her strange affinity for the shadows. But as conspiracies unfold within the collegium walls, and the body count rises, Mia will be forced to choose between loyalty and revenge, and uncover a secret that could change the very face of her world.

Set in the world of Nevernight, which Publishers Weekly called “absorbing in its complexity and bold in its bloodiness,” Godsgrave will continue to thrill and satisfy fantasy fans everywhere.

Believe it or not, I wasn't planning on reading this book, and for a couple of reasons. I read Nevernight last year (a little over a year ago) and enjoyed the book, but a year later, I couldn't remember much from the book (except a key death in the ending). I couldn't remember who Mercurio or Ashlinn or Scaeva were. Heck, I almost forgot who Mister Kindly was! So as Godsgrave began to pick up speed in publicity and marketing, I felt less inclined to read the book - partly because I couldn't remember much from Nevernight. The other reason was because I thought to perhaps binge-read the series, once the third book was published. I'm glad I decided to read Godsgrave now, even though the ending was quite the cliffhanger, and there is a good chance I will forget everything while waiting for the publication of book three. Kristoff has put together an excellent follow-up to Nevernight, and it will not disappoint.

In this novel, Mia Corvere has taken on a new task in her journey to get her revenge. She is now a Blade of Our Lady of Blessed Murder, but the Red Church doesn't like her pursuit of revenge. She defies the Church, and has herself sold to a gladiatorial collegium in order to get closer to Scaeva and Duomo, who will make appearances during the grand games in which the gladiators fight. In the arena, Mia sheds more blood than she ever has, but she also makes unexpected allies. Her need for revenge competes with her loyalty and her conscience. And she will discover truths that she never thought possible, truths that will change her world.

At first I was a little daunted by the size of this book - most likely, it's no bigger than its predecessor, but still. It's a fairly long book. No matter though, because it was action-packed and twisted from start to finish. At no point was I lacking interest. Kristoff has upped the ante in this book, drawn the stakes higher, and given Mia more close calls.

Mia is as clever and as fearless as always, but she also shows some vulnerability, to herself and to a select few people. She isn't cold and unbreakable as steel like her fellow gladiators think, but she is unshakable in her goals. Mia is a fierce girl who becomes not only driven by revenge (though it is always present on her mind). What happens when she starts to care about others, and her loyalty interferes with her quest for revenge? You'll find out in this book.

There are a lot of old and new secondary characters that make significant appearances. I won't mention too many names because things will become spoiler-y really quickly. There are a few people that you would never expect to see working with Mia, a few that you wouldn't expect Kristoff to take and dig deeper and redeem. My favorite secondary characters are some new ones that you'll meet - Sidonius, Bryn, Belle, and some others. Kristoff's characters are so likable, even the messed-up villainous antagonists. And of course, there were many Mister Kindly appearances, and Eclipse too. I love Mister Kindly and Eclipse's back-and-forth banter.

I was a little wary of the idea of the "grand games", because it is a concept that isn't new to fantasy series, especially in a sequel novel. These games were extremely bloody and merciless, and even though I knew Mia would walk away from each fight (this isn't a spoiler -- I doubt Kristoff would kill off his protagonist in book two of three), I felt a little uneasy. Kristoff doesn't hold back when it comes to the blood, gore, and #stabstabstab.

I didn't think I would totally enjoy this book, given the ending of Nevernight, in which one of my favorite characters dies. But I liked this sequel. Kristoff did the series justice (so far). There is a massive cliffhanger at the end of this book, which is to be expected but is still annoying, but it ensures that I'll be reading book three!

There are only two things that I didn't enjoy about this book, and both are preferences of mine. I don't like love triangles, and this series definitely has one going on. There is a new love interest introduced in this book, and things go very far in that romantic direction. I don't really have a problem with this ship - I just don't like love triangles and at this point, there are two love interests.

The other thing? I'm not a fan of a certain sexual act that occurs in this book. Which is funny because I read a looooooot of adult romance novels - but this thing isn't usually in those romance novels, so I was a little taken aback. You can ask me about it privately, if you wish to know ahead of time!

If you read and enjoyed Nevernight, there is no way I wouldn't recommend reading this book. It's a good sequel - dare I say an even better novel - and worth the read. But like I said above, this isn't a YA novel (I know Kristoff has a lot of YA readers), and there is a lot of explicit content (killing/mutilation and sexual acts), so I don't recommend this book/series to younger readers. But I think most people know their limits so I probably don't need to state that.

4 stars. I'm excited for the rest of the world to read this book because I have a feeling that the Nevernight fandom will explode after going through this one! Things get more and more intense in just about every area of Mia's life, and it's all leading to a showstopping conclusion in book three. I'll be waiting for it!