Review: The Wood by Chelsea Bobulski 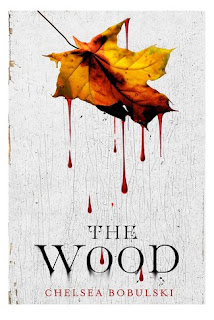 After her father goes missing in the woods that they protect, Winter tries to seek the truth in what happened, why the wood is changing, and what it all has to do with the arrival of a mysterious stranger in this thrilling YA debut.

When Winter’s dad goes missing during his nightly patrol of the wood, it falls to her to patrol the time portals and protect the travelers who slip through them. Winter can't help but think there's more to her dad's disappearance than she's being told.

She soon finds a young man traveling in the wood named Henry who knows more than he should. He believes if they can work together to find his missing parents, they could discover the truth about Winter’s dad.

The wood is poisoned, changing into something sinister—torturing travelers lost in it. Winter must put her trust in Henry in order to find the truth and those they’ve lost.

Bobulski’s eerie debut is filled with friendship, family, and the responsibilities we choose and those we do not.

I'm not sure what interested me in this book in the first place, but by the time I picked up the galley, I'd forgotten what the book was about or why it appealed to me months ago when I requested it. Nevertheless, it was an intriguing and curious read, and I didn't stop reading until I was finished. I will be looking out for more books by Bobulski in the future.

When Winter's father disappeared mysteriously 20 months ago, Winter became the new guardian of the wood. As guardian, like her father and grandfather and so many generations of the Parish family, Winter must protect the wood, and direct travelers who have lost their way. The wood is full of thresholds from different times and places, and travelers sometimes wander into the wood and need to be shown their way back to their threshold. Winter is forever tied to the wood, now that she is the new guardian. But something strange has been happening in the wood. Darkness has been creeping in, and two council members have disappeared. What's more, the son of the council members wants Winter's help to find them. Henry is no guardian or council member, but he knows about the wood, and he has more knowledge and power than Winter thought. It is up to Winter and Henry to find out where Henry's parents went, what is happening to the wood, and how the events are related.

One of the strongest and best aspects of this book was the setting. The wood is no ordinary forest. After first glance, it is, but after walking further into the wood, it becomes something else. The wood is eerie and magical, haunting and beautiful. It is its own being, alive and with a mind of its own. And with a dark force moving with the wood, the wood has become sinister.

I liked Winter almost immediately. She has a difficult life, being tied to the wood at all times, unable to tell her best friend why she can't go to college or stay over for dinner. Winter has accepted her fate but she never stops trying to find out what really happened to her father - because she and her mother both now that he didn't simply disappear. Winter is an extremely smart girl, in academics and in general. She is clever and quick-thinking. She also has a good heart and a trusting nature, though she is also protective of her guardian duties.

Henry is such a sweetheart. He comes from eighteenth-century England, and he is desperate to find his parents (the missing council members). He isn't a guardian so he shouldn't know anything about the wood, but his parents taught him everything. Henry has impeccable manners and practically lives by chivalry. He isn't without his faults but he also isn't a bad guy. He's the upstanding sort of old-fashioned British boy that we American gals like to swoon over. He is definitely a swoony lad.

The story is a little on the predictable side - in which Winter and Henry try to find out what is happening to the wood, and where his parents went. They discover a lot of bad history in the council and the wood, and they discover some truths about Winter's father.

The same can be said about Winter's friendship with her best friend Meredith. Meredith knows nothing about the wood, which makes their friendship a strange and difficult one. Meredith knows something is wrong but Winter won't ever tell her the truth. This was another important relationship for the author to hone in on, and I'm glad she did.

And of course, the subtle, slow-burn romance. From the minute Winter lays eyes on Henry, she has a crush, though it's not totally obvious to her at first. I liked the romance - it's slow-burn, and sort of hate-to-love. Well, more like they got off to a rough start. But Henry is a protective sweetheart and Winter is a nurturing intellect and they mesh together really well. They have great chemistry and they get along well. I adore these two. I wanted more kissing and a little more something in terms of their ending but I was satisfied overall, with the romance.

I was satisfied with this book in general! It's an intriguing and eerie story, with a tough heroine, a nice hero, and a high-stakes climax (though it won't appear that way, at first). I'm glad I gave this book a chance!

There is this aspect of the ending that, well, let me leave it at that. The ending in general is good and fits the story. But there is one thing that I personally wanted to see, and it didn't happen. That's okay though! It would be cool if the author wrote some sort of epilogue. But only if that epilogue featured That Thing that I wanted (and others readers will probably want too).

YA paranormal readers might like this one. Fantasy readers too. It is set in modern times, but it deals a little with time-travel, and a creepy forest. And a hot British boy from the eighteenth century who is a sweetie but also excellent with a sword. Not to forget our smart heroine who is selfless and kind. I recommend this book if you're looking for an intriguing and somewhat quick read!

4 stars. I believe this is a standalone but I wouldn't mind seeing another book follow this one! Or maybe an epilogue. In any case, I will definitely look for more books by Bobulski in the future (related to this one or not).