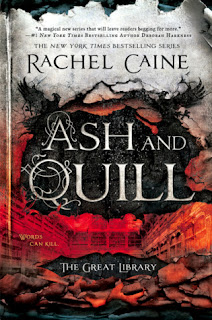 The first thing I'll say: this is NOT the conclusion to the series! I believe the original contract involved three books, but Caine has since signed for two more books, so there will be five total. At first, I was a tiny bit apprehensive, because I thought Paper and Fire ended in a way that set up an explosive conclusion in Ash and Quill. But, having read Ash and Quill, I am all for the next two books and can't wait to see where Caine takes the series. This book ends in a crazy cliffhanger, which Caine set up perfectly!

I'll try to keep this general, even though this isn't a conclusion novel. A lot happened in this book, and to go into detail would be to spoil some very series-changing events!

This book begins pretty much where Paper and Fire ends, if I remember correctly. Jess and the gang are now in Philadelphia, having traveled via painful but immediate methods from London to Philadelphia. They may have escaped the clutches of the Archivist, but they are no safer in this city. The city is run by Burners, and the Burners want them dead. Jess and Thomas agree to build the printing press from the leader in order to save the group, but they know they'll need to escape the colonies. Going back to Alexandria to fight the Archivist is the only option for safety, but that plan is perilous beyond words. Everyone must make sacrifices, some more deadly than others.

I didn't remember some of the little and big things from Paper and Fire, mostly some vague details, but it was okay because I really didn't need to remember too much. I liked Paper and Fire a lot, and Ink and Bone, but I read the second book over a year ago, and the first book over two years ago. Thankfully, Caine does a fine job in bringing back readers into the story. You know exactly the context of where Jess and the group are, and why they are there, and what danger lies ahead of them. You don't need to reread the previous books in the series before starting this one (though it's always a lovely idea!).

This book made me adore the gang so much more, though I already liked them in the previous books. Jess is so clever, selfless, and sneaky, always two steps ahead and an incredible strategist. Morgan is so selfless as well, and a hard worker. Thomas is a genius and a good guy. Glain is smart and lethal. Dario is charming and not nearly as selfish as he used to appear to be. Wolfe is his usual commanding self, and Santi is always the protective, battle-ready captain. Khalila is tough as nails and a strong voice in this book. I want to hug all of them and then wrap them in bubble wrap! This group goes through so much, both physically and mentally. Especially Jess and Santi! I felt like Jess was getting some kind of injury in ever scene.

This book is exciting and a bit nerve-wracking from start to finish. Nerve-wracking in a good way - I couldn't stop turning the pages and trying to anticipate what would happen next. Things are dire in Philadelphia, and then things are even more dire when they escape Philadelphia and leave. The stakes never seem to lower, nor does the danger. You'll be in no danger of getting bored or setting this one aside.

Caine does characterization and character development so well, and world-building too. The world she has created in this series is so unique and intense. I felt like I could picture the scenery, the action, the characters. Caine is an amazing who really knows her stuff. I'm always in awe, after every book of hers that I read. And she does her research well! Imagine going through the steps to creating a machine - the printing press!

For those looking for romance, there is a little romance. There are a few couples in this book, and no love triangles within any of the pairings. Jess and Morgan are a sweet pair, and I sort of wish they had more scenes alone, but that's difficult when you're either in prison and constantly trying to keep yourself alive. Wolfe and Santi a strong pair, and I loved it when there were small moments of tenderness between them. Dario and Khalila are the final pair - they aren't together, but it's obvious that they both have feelings for the other. They are a fun pair. In general, the romances are extremely subtle and not anywhere near the focus of the story. But there are ships to root for, and no love triangles!

Like I said earlier, there is a cliffhanger ending! It's a shocking cliffhanger, because you don't know how things will play out. This book is written in third person limited (Jess's POV), and so you don't always know what he is planning. I seriously could not read the last fifty or so pages fast enough. The ending demands another book and thankfully, we get two! I'm excited to read them, whenever they will be published. Ash and Quill was an excellent continuation to the series!

Nothing to complain about really! There were minor things that I wanted, like more alone time for Jess and Morgan, and on principle I don't like cliffhangers. But both of those things have their place in this book and I understand why they are necessary.

I definitely recommend Ash and Quill if you've read the first two books! This book will not disappoint - none of the books have. If you haven't read any of the books in the series and are on the fence, give them a chance! What's better than a book about books? This series is all about books and it has a very intriguing take on censorship. I'd go as far as saying that this series should be in classrooms and curriculum!

4 stars. I need the fourth book now! Caine has swept me up into yet another great addition to this series, and I'm not sure how I'll survive another year (or more) for the next book. I'm sure it will be just as excellent as its predecessors!