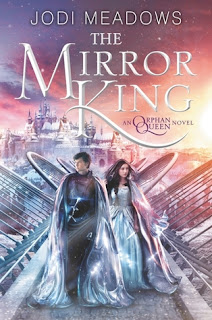 Wilhelmina has a hundred enemies.

HER FRIENDS HAVE TURNED. After her identity is revealed during the Inundation, Princess Wilhelmina is kept prisoner by the Indigo Kingdom, with the Ospreys lost somewhere in the devastated city. When the Ospreys’ leader emerges at the worst possible moment, leaving Wil’s biggest ally on his deathbed, she must become Black Knife to set things right.

HER MAGIC IS UNCONTROLLABLE. Wil’s power is to animate, not to give true life, but in the wraithland she commanded a cloud of wraith mist to save herself, and later ordered it solid. Now there is a living boy made of wraith—destructive and deadly, and willing to do anything for her.

HER HEART IS TORN. Though she’s ready for her crown, declaring herself queen means war. Caught between what she wants and what is right, Wilhelmina realizes the throne might not even matter. Everyone thought the wraith was years off, but already it’s destroying Indigo Kingdom villages. If she can’t protect both kingdoms, soon there won’t be a land to rule.

In this stunning conclusion to THE ORPHAN QUEEN, Jodi Meadows follows Wilhelmina’s breathtaking and brave journey from orphaned criminal on the streets to magic-wielding queen.

Dear All Other YA Fantasy Authors: Take notes. You want to write a conclusion to a duology or trilogy or series in general? THIS is how you do it. Complex, heartbreaking, developed, gorgeous and so so so satisfying, in the end. How NOT to break your readers' hearts and yet, still twist their emotions and feels and have them hanging on desperately. Jodi Meadows SLAYS in The Mirror King (and I don't necessarily mean that literally - or do I?).

Do I dare summarize this book? It starts exactly where The Orphan Queen ends, with that tragic and totally scary ending. I will say, that certain part of the ending is not permanent. WHY it is not permanent, I won't say. But anyway. Wil is determined to find Patrick, who is trying to rally people to support him in taking Aecor - in Wil's name. Wil knows that taking Aecor means declaring war on the Indigo Kingdom, and she doesn't want that. But you can't always have what you want, something both Wil and Tobiah realize. Both of them must make decisions that will hurt, but the decisions will be for the greater good of their respective kingdoms.

This book. I don't even know where to start. Can I just tell you all that it was AMAZING, a perfect conclusion to the series, and a must-read? I thought The Orphan Queen was fantastic, but The Mirror King probably beats it. Both are getting four stars from me, but it's more like super super SUPER close to five stars. I'm a tough nut to crack when it comes to five stars.

I love how Meadows digs even deeper in Wil's character, and her mind. Is she brave enough to go after Aecor, despite her alliance with Tobiah? Is she good enough to be a queen? Is she ready? Yes, she was born a princess, but is she a capable queen? Wil has so many insecurities in this novel, and all of them are legitimate and understandable and I love how Meadows skips none of them. Wil is every bit of the tough and kickbutt and strong woman that she was in The Orphan Queen, but she has matured and developed into someone who must think of the greater good.

Oh Tobiah. He too undergoes character development that comes from a heartbreaking event. Seeing him making difficult decisions and indirectly pushing Wil away is heartbreaking, but you can't help but understand what he's doing and why. I adore Tobiah. He's regal and strong and someone I'd want in my corner, but he also has insecurities and doubts, just like Wil.

I won't say much specifically about the plot, because I don't want to accidentally spoil anything. But I will say that despite this book being nearly 1.5 times the length of your average YA book, I read it in practically lightning speed. I couldn't stop reading. Meadows just kept throwing twist after twist, crazy event after crazy event. So much of this book happens because of the wraith boy, and the wraith, and a different villain who is creepy. Meadows concocts a really intriguing and heart-pounding and exciting story! Coming down to the climax and ending of the book felt like a high-speed gallop to the finish line. I couldn't read fast enough!

The romance isn't the center of the book (just like how it isn't in The Orphan Queen), but it is important and somehow, ever-present, even though it's not physically always present. I like how complicated Wil feels about Tobiah. These two aren't your average couple, and they can't just be together because they want to be. They struggle and push and pull and hurt and fight. I love the romance in this book.

I'll wrap this up now. I won't say anything specific about the ending, except that I loved it. There is a bittersweet part to the ending, but the ending is so good, guys. It's not cookie-cutter perfect, but rather, VERY realistic for a fantasy novel, and satisfying. SO satisfying, I promise!

The only complaint I have is that I didn't think the author did the best job of recapping the big things that happened in The Orphan Queen, in the very beginning of The Mirror King. Typically authors use the first chapter of a sequel to kind of get readers back into the world, and remember what happened (the major things) in the previous book(s). They do it by dispersing the recap throughout the chapter. I think because the author started this book EXACTLY where The Orphan Queen ended, she couldn't really work in the dispersed recap? I'm not sure. But I'll be honest - I read The Orphan Queen over a year ago. And besides the CRUEL ending, I didn't remember some pretty significant things, like certain people's names, or the fact that THIS guy is good and we actually like THIS girl. I caught on as it unfolded but now I want to reread The Orphan Queen (which isn't a bad thing).

So I guess I recommend a reread of The Orphan Queen, before starting this book!

4.5 stars. What a perfect (I say "perfect" but not in a "cliche perfect" kind of way) ending to a wonderful series! I love this duology something fierce!