Review: All Chained Up by Sophie Jordan 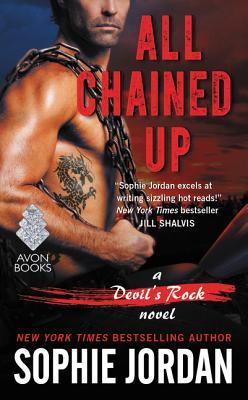 There are bad boys and then there are the men of Devil’s Rock . . .

Some men come with a built-in warning label. Knox Callaghan is one of them. Danger radiates from every lean, muscled inch of him, and his deep blue eyes seem to see right through to Briar Davis’s most secret fantasies. But there’s one major problem: Briar is a nurse volunteering at the local prison, and Knox is an inmate who should be off-limits in every way.

Knox feels it too—a shocking animal magnetism that drives him to risk his own life to protect Briar’s. Paroled at last, he tries to resist her. She’s too innocent, too sweet, and she has no idea what Knox is capable of. But a single touch can lead to a kiss—and a taste . . . until the only crime is denying what feels so right . . .

“When the prison doors are open, the real dragon will fly out.”—Ho Chi Minh

I've read a little bit of everything when it comes to Sophie Jordan - her YA, NA, adult historical romance, and now adult contemporary romance. Her YA books are hit or miss for me, I've only read one of her NA books (I loved Foreplay!), and I've read two of her historical romance novels (one I liked, one I hated). So I'm pretty split with Jordan, but I will always give her a shot, when it comes to her adult books. This new book by her, a contemporary romance novel? Hands down, my favorite Sophie Jordan book to date. I thought I liked Reign of Shadows and A Good Debutante's Guide to Ruin, but All Chained Up takes the cake!

Knox Callaghan has been in prison for eight years. Prison has hardened him, driven emotion from him. But the new nurse volunteering at the prison has caught his attention. She's nervous around him, and it isn't entirely because he's a felon. Briar should be staying far away from dangerous men, especially given who her father was. But there is something about Knox that attracts. When a shocking event leads to Knox saving Briar's life, nothing is the same. Both of them have a new chance at life, and neither of them can stay away from each other.

I haven't read too many books that feature an ex-con/felon, but two stand out in my mind - Dare To Run by Jen McLaughlin, and Time Served by Julianna Keyes. I loved both of those! And I love this one too. Knox blew me away, and I adored the sweet yet fiery romance.

Knox is a one-of-a-kind male protagonist, as far as I've encountered. He seems to be devoid of emotion, and all he cares about is surviving prison and keeping his brother alive. Eight years have gone by, and both of them should be up for parole soon. Knox is a hardened, tough man, and he has been spending his prison time working out and bulking up even more (he used to play football). At twenty-eight, he is still ruggedly good-looking and Briar notices.

I like Briar! I felt like I really understood her, her anxiety and fear of the prison and inmates, her need to shrink in on herself and protect herself from potential threats. Briar is a strong woman but subtly so - she isn't brazen and feisty and bold. Yet she isn't completely delicate. She's sweet and a little innocent (especially in Knox's eyes), and I like how she softens Knox's hard edges.

The pair together is like fireworks. The first third of the book is spent in prison, with Knox and Briar interacting on occasion. I love how Jordan sets up the seeds for the relationship, but does not have the pair initiating any physical relationship yet. Briar gets to know Knox a little while in the prison health center. But it's when Knox is freed and finally living out of the prison that their relationship explodes. Briar and Knox have shared attraction since day one, but I like that the author kind of avoids the physical nature of their relationship until about two-fifths in.

The chemistry between the pair is intense! There are several super hot scenes in this book, probably the hottest I've seen Jordan write. Knox has had a long time since he was with anyone... and Briar has a difficult time trusting men. So when the pair finally let their own walls down, it's pretty steamy. I like the development of the chemistry! Lots of sexual tension in this book.

But like I said above, Jordan didn't make the relationship physical until about two-fourths in. This builds the emotional side of the relationship, and I liked how Knox and Briar fall in love. They're very attracted to each other, and on paper they don't seem to fit (ex-con + prim nurse), but they are absolutely a perfect match, both physically and emotionally.

This story felt more like a life story, rather than a story that had a huge buildup and a crushing climax or something. If you know what I mean? I mean, there IS a climax, and it is very important to Knox and Briar's relationship. But I like that it wasn't TOO dramatic (well, I didn't find it too dramatic). There are other things going on besides Knox and Briar's relationship, but I won't say anything about them because the other plots are a bit spoilery.

Overall, I am in love with this book! Mostly, Knox, but the story in general. I'm impressed with Jordan's storytelling! I can't imagine it was easy to write in the perspective of an ex-con, especially since Jordan wrote so much of the book's page-time physically in the prison. But she did it beautifully! This book was raw and a little heartbreaking (for Knox, in terms of his prison time and how he beats himself up) and super sexy.

I have to admit, I wasn't a big fan of Briar's sister! Don't get me wrong, her heart is in a good place. But she seems so controlling! That blind date? Who does that?! My sister would get some choice words. Of course, Briar is more passive than me but STILL. You won't like Briar's sister (I'm not sure if that is the intent or not).

Alsoooo, any romance novel could benefit from one or two BIG intimate scenes! There was one or two, and then there were smaller shorter ones. I personally think there could have been another big one, in this story. But maybe I've just gotten really picky!

If you're a fan of adult contemporary romance novels, I highly recommend this one. I was a little wary of the content (prison, and then the event in which Knox saved Briar, that was scary), but Jordan wrote the story and subject matter so well. This book is much more raw and intense than Jordan's adult historical romance novels, but in a good way!

4.5 stars -> rounded down to 4 stars. If you're a fan of Jordan's adult novels, then you should check this one out! It's not a light read, but it's very powerful and very, very steamy. I can't wait to read Reid's book!