Review: Betting on the Wrong Brother by Cathryn Fox 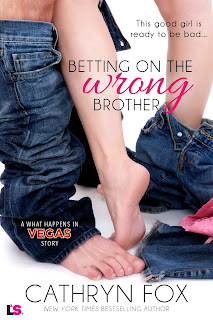 Running into her teen heartthrob while naked wasn’t exactly part of romance novelist Andi Palmer’s weekend plans. Worse, he doesn’t recognize her and gives her a fake name¬. Years ago, he shot her down in the worst possible way, and now this? It’s time for a little down-and-dirty revenge.

Ryan’s more than a little turned on by this good girl who wants to be bad. But things aren’t what they seem, and the secrets they’re keeping from one another might just end this sexy little rendezvous before it ever begins…

I was supposed to review this book with my other post going up today, but given that I didn't like this book very much, I wasn't about to skew my rating to fit the tour. I had a good feeling about this book, but it just wasn't for me! The good thing is, unlike the title might insinuate, there is no hint of love triangle (I didn't think there would be). But I was not pleased with this book overall, sadly.

Romance writer Andi Palmer is having terrible luck in Vegas - she gets stuck in a hot elevator in the hotel while trying to make it to her meetings at the romance writers convention. She's trying to change when the elevator starts working again, and in walks someone she knew from when they were kids. Someone who was horrible to her. Ryan Wheeler is at the hotel to chase ghosts (he's a horror writer), and he doesn't expect to find a half-naked woman in the elevator. Sparks fly, but something is off about Andi. They can't deny the attraction between them, but there are too many secrets between them too.

Despite what the title might imply, there is no love triangle in this book. Andi sees Ryan and immediately thinks that he is Nolan (who is his younger brother). Nolan and Andi knew each other in grade school, and Nolan wasn't particularly nice to her. Years later, Andi thinks it is Nolan she is speaking to, and Ryan doesn't realize that Andi thinks he's Nolan (it's not obvious). When he gives her his name, she thinks he's lying and hiding his identity, and that he doesn't recognize her (she used to be overweight and very different - her words, not mine).

There were so many awkward and cute scenes in this book, which were pretty funny, for the most part. There is ONE hot scene, and it's pretty hot (not super hot though). The book is short, so you'll blow through it very quickly. Of course, all three of things things I just mentioned are easily dislikes too. Read on for what did not work for me!

Possible spoilers. Ahead. Possibly. I'm just going to start typing, so you are warned as of now.

I honestly don't even know where to start. I was really up and down, with Andi. At the very beginning, I liked her fine. And when she crashes into Ryan in the elevator - literally - I was really enjoying the book. But then her crazy and stupid plans for revenge kind of made the story take a nosedive. She basically forces him to do a male model strip thing for the romance convention (he's not a male model, but he's built like one, but that's not the point!), and he's uncomfortable doing it (though it might not seem like it). Are you kidding me?! I realize that she thinks he is Nolan, the boy who humiliated her WHEN THEY WERE CHILDREN, but exactly that - they were CHILDREN. You're telling me you haven't let go of that s*** yet, after nearly over ten years?! Fifteen?!

I felt bad for Ryan during this entire book! Andi became such a brat, and he had to beg and grovel for her attention, and she's over there trying to get "revenge". Poor guy! He eventually figures out who she thinks he is (he calls Nolan and asks), but he doesn't tell her that he knows. The convention is only a week long, and he doesn't want to ruin the chemistry between them. I get that.

But then, at the climax, when Andi finds out that he has known that she thinks he is Nolan, she flips the f**k out. It was so dramatic and exaggerated and I almost lost my d**n mind. SERIOUSLY!? You're going apes**t because he didn't tell you that he knows that you think he is Nolan?! Not at one point did Ryan lie to her - he told her his name is Ryan (it is), and that he isn't who she thinks he is (she kept interrupting him and changing the subject, whenever he tried to bring it up).

And now, when she finds out, SHE's the one that's butthurt. After making him do a male model stripper-esque event (he did NOT sign up for that), making him feel uncomfortable in front of numerous thirsty women, and SHE'S the one hurt?! I just don't get it! He never lied to her or deceived her - she's a complete dumba** for one) holding on to vengeful feelings like that FROM HER CHILDHOOD (let it go, idiot), and two) feeling hurt and betrayed and other dramatic feelings because "you didn't tell me?!". Calm the f**k down.

Ugh. Andi was fine at the beginning and then just became a drama queen. It doesn't help that this book was super short and so all of this drama seemed really condensed and not spread out. We go from the male-model event to sleeping together to going on a date, all within like, twenty-four hours of meeting each other.

And that's another thing. After ONE WEEK, Ryan is popping out the I-love-yous. When Andi finds out the Big Secret about Ryan's identity, she runs away and he goes chasing after her (UGH! Idiot! I HATE it when the man is the one groveling, when the woman is so CLEARLY at fault too!). Why in the world are you going after this air-headed woman!? Someone please explain.

Can we talk about how Andi is a romance writer, we're at a romance convention, and there is only one LOUSY sex scene in this book?! (There might have been one other, but it was extremely short, and totally does not count.) It could be due to the fact that this book is super short, but I was so disappointed by the lack of heat! So, so disappointed.

I'm done. I'm not going to apologize for my blatant dislike of Andi. She kind of ruined the book.

Would I Recommend it:

Absolutely not. I haven't read anything by Fox (although I am curious about her Brazen novels), and I see that this is the twelfth book in a series. So I suppose if you've read part of this series, go for it? Or maybe not. It was pretty bad.

1.5 stars -> rounded down to 1 star. I tried! I thought this would be awkward and adorable (it was awkward, and I suppose on the surface, it was adorable), but maybe too fluffy and too dramatic for me. And definitely too short!