Review: Tell the Wind and Fire by Sarah Rees Brennan 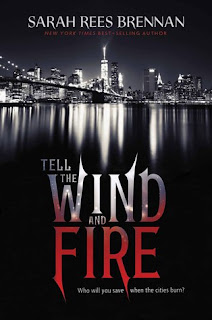 In a city divided between opulent luxury in the Light and fierce privations in the Dark, a determined young woman survives by guarding her secrets.

Lucie Manette was born in the Dark half of the city, but careful manipulations won her a home in the Light, celebrity status, and a rich, loving boyfriend. Now she just wants to keep her head down, but her boyfriend has a dark secret of his own—one involving an apparent stranger who is destitute and despised. Lucie alone knows the young men’s deadly connection, and even as the knowledge leads her to make a grave mistake, she can trust no one with the truth.

Blood and secrets alike spill out when revolution erupts. With both halves of the city burning, and mercy nowhere to be found, can Lucie save either boy—or herself?

Unfortunately, this book was not for me, as is evident by my rating. It's not for me but it could very well be a book that you might enjoy. It was definitely not something I liked. I originally gave this book two stars, but I bumped it down to one star, after a few days of pondering what the heck happened in the story.

I'm not even going to bother summarizing this book. I literally have no idea how to summarize it - the official summary makes no sense, and neither did the book. So I'll just move on the next section.

Gosh this book was such a huge waste of my time. Like I said above, it might be a book for you - this review is entirely my opinion - but for me, it was a colossal waste of time.

The synopsis is confusing, and the story is confusing. The first two or three chapters were huge info-dumps, chapter after chapter. You get to experience ALL of the world-building by Lucie telling you (in narration), and all in the first three chapters. I kid you not. It's like fifteen pages of paragraph after paragraph of narration about the history, the setting, etc. Snooze.

I have not read Dickens' book (which this is loosely based on), but had I known there would be some weirdo love triangle, I would have stayed FAR away from this book as possible. Lucie has always been in love with her boyfriend Ethan, and she's very devoted to him (literally every other sentence is about how perfect Ethan is).

But enter Ethan's (illegal) doppelganger , who isn't supposed to exist. He looks the same as Ethan (a little skinnier), but his personality is totally different (indifferent, moody, does not care at all). As soon as Carwyn is introduced to the story, Lucie practically latches on and adopts him. Seems weird for a girlfriend who is obsessed with her boyfriend, right? I suppose she gets subconsciously confused because Carwyn is basically a physical carbon copy of Ethan... but she knows the difference, physically. Honestly I don't understand her reasoning for wanting to mother Carywn, for pretty much abandoning and everything to make sure Carwyn is well and truly bothered by her annoying presence.

I'll be straight with you guys - Lucie has feelings for one guy, and that is Ethan. But Carwyn falls for Lucie (duuuhhh, of course), and he kisses her several times. And while she isn't the one initiating, she's also not fighting him. In a weird way (because of the plot), it makes sense that she wouldn't fight him (she can't), but she does have a choice, and she can, but she doesn't.

So, love triangle. In a physical sense. Still obnoxious.

Did I already mention how I literally could not follow this story? It's more than just the insane info-dump in the very beginning - this book is hella confusing. I've read it in its entirety and I'm still confused about 60% of what happened. The beginning is especially bad - it's boring, it doesn't hook you, and you have no idea what's happening (this is both before and after the massive info-dump).

And did I mention that this book (the entire book) was crushingly boring? No? Well, there's that too.

Ethan was so "perfect" and golden and a model son, and it kind of made me want to vomit a little. Don't get me wrong - theoretically I like this type, and by the end of the book, I really liked him - but he's so one-dimensional, at least for 75% of the book. We learn a pretty big twist towards the climax, and I was like FINALLY! Here is the depth I needed from him! But the way Lucie describes him... so wooden and one-dimensional.

I do not like Lucie. She cheats on her boyfriend (hello, accepting kisses from someone who is not your boyfriend is totally cheating on some level), she's revered as this angel from the Dark side of the city, and she's incredibly pathetic, in my opinion. Not to mention a little on the slow side? Slow as in she should have seen XYZ coming but didn't. I did not like her at all.

The ending was, well, weird. Depending on what "team" you find yourself on (I was apathetic and could not care less), you'll either be cheering, or heartbroken. I was quite pleased with the ending (I did not like that character), but it was still a terrible ending, and nothing was resolved, in terms of the two halves of the city.

I could probably go on and on but I'd rather forget I read this book.

Nope. I mean, obviously there are will be people that will see this review and remain undeterred - and that is great! I've only read one book by this author (Team Human) and I didn't like it or hate it. But I'm sure her regular fans will be clamoring for this one. It... it's not great. But please, experience it for yourselves if you were already looking forward to it, you may love it!

1 star. Like I said, not for me. Clearly. But it could be one for you. This book had everything going for it - gorgeous cover, prolific author, Dickens retelling (NOT a clear synopsis, I'll tell you that), but it fell so flat for me. I wish I felt differently but I'm just going to forget that I read this one!