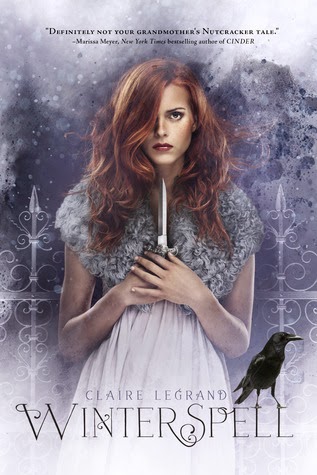 The clock chimes midnight, a curse breaks, and a girl meets a prince . . . but what follows is not all sweetness and sugarplums.

New York City, 1899. Clara Stole, the mayor's ever-proper daughter, leads a double life. Since her mother's murder, she has secretly trained in self-defense with the mysterious Drosselmeyer.

Then, on Christmas Eve, disaster strikes.

Her home is destroyed, her father abducted--by beings distinctly not human. To find him, Clara journeys to the war-ravaged land of Cane. Her only companion is the dethroned prince Nicholas, bound by a wicked curse. If they're to survive, Clara has no choice but to trust him, but his haunted eyes burn with secrets--and a need she can't define. With the dangerous, seductive faery queen Anise hunting them, Clara soon realizes she won't leave Cane unscathed--if she leaves at all.

Inspired by The Nutcracker, Winterspell is a dark, timeless fairy tale about love and war, longing and loneliness, and a girl who must learn to live without fear.

Umm, I didn't know this was a "The Nutcracker" retelling. Well, the synopsis does say that it is "inspired" by "The Nutcracker", but still. I'm not entirely sure I saw the influences. Or maybe it's just been that long since I've watched "The Nutcracker". Anyway. I agree about "dark" and maybe "fairy tale", but ehhh about "timeless". Just saying.

Clara's mother was murdered. Clara's father has basically gone mad. Clara's godfather has been training her in defense and knives and fighting, all the while obsessing over something else. Clara has been struggling not to recoil when a Dr. Victor touches her, leers at her, threatens to basically take her innocence... all the while, Concordia is falling to corruption, especially with Clara's father (the mayor) not doing much. One night, everything basically goes to s*** and Clara finds herself with her godfather who is not human, the statue who is now a flesh-and-blood "human" not-human who is a prince... and a missing father. She must bring her father back before Dr. Victor and a politician destroy her life - but to do so, she must travel with Nicholas, the prince, to Cane, the magical land from where the prince is. Where the evil half-faery, half-human queen resides.

The plot, overall, was good! The beginning was very slow (I'll get to that later), so I honestly just kept flipping and skimming pages at one point. Things really don't start to get interesting until like, 20% in, or whenever the "loks" show up (not entirely sure what they are). Then Clara meets Nicholas, finds out that her father was taken, and enters Cane with Nicholas.

I liked everything up until Clara and Nicholas were separated (not giving more context than that, but I think this is important and you should know that it does happen). Clara and Nicholas are an excellent pair. They bicker and boss each other around, but they are also fierce and protective and immensely loyal. I love that Nicholas sticks with her no matter what he needs to do for his kingdom. He isn't perfect, and he contemplates terrible things, but he is such a great character. Nicholas is... not faery, so he's human? I think he's human. But he's a royal, and that literally means power.

So I liked Clara, and Nicholas - and I especially liked them TOGETHER. The romantic scenes in this book are few and far between - which was extremely disappointing, because I thought this one was pegged as "dark" and "sexy"? It's dark, ish, but not sexy. Not really, anyway. The queen, Anise, has a heck of a lot of sensuality, and it gets weird when Anise and Clara are holed up in Anise's Summer Palace... weird.

Read on for what I didn't like! Balanced review for the win!

One of the first things I mentioned above was that the beginning is slow. Oh, is it slow. Clara's life in New York is so dull and frightful and boring and aggravating. I totally get the historical authenticity of Clara's situation, but snooooooooooozzzzzzeeeeee, and not interested. I liked it when the magical part to this book was introduced. Otherwise, this would have been one BORING historical fiction novel. And you know that I know a lot about historical fiction novels, since I read so many of them (adult and Young Adult). In general, this book moved slowly - I bet about 100 pages could be shaved off this book, and it'd move only slight faster. *snores*

But. So little chemistry-filled scenes.

Disappointing, no? For such a hyped-up, "sexy"-tagged romance, it was very not-explored. There was no physical romance between these two, despite the fact that the chemistry was sizzling. Clara bolts in the ONE SCENE, and the next one is not actually real, and that's it. Two scenes. Disappointing.

Then there was Clara's time at the Summer Palace with Anise. Talk about... weird. I'm personally not a fan of girl-on-girl action, but if you are, good for you. Things get frisky between these two. I'm totally serious. At first, I thought Clara was just going along with Anise, and trying to manipulate her, so she could escape. But then... I think Clara actually enjoyed things. So I'm not sure. *shudders* This is like, a good chunk of the book. Perhaps one fourth or maybe even one third of the book is the leg of the love triangle in which Anise and Clara get it on. I was not amused. And then the author tried to play it off in the end like Clara was just really similar to Anise, in terms of abilities and whatnot, but whatever. No. Call it empowering, call it feminism, call it whatever you want - I don't read lesbian fiction.

In any case, I find that Clara was kind of a dunderhead. She is pathetic, which is how she is supposed to appear in this time of history, but she ACTS the part and IS the part. Literally lets everyone do all the hard work for her... ew. I sort of liked her in the very beginning, because I felt bad for her, but when we reached the magical realm, my liking of her plummeted. She couldn't stand up for herself for s***.

The book seemed kind of... not convincing. I'm not sure how to approach this feeling - but like, the prince has NO ARMY. No one recognizes him, because he was in "Beyond" (New York) for years, and time in Cane moves four times faster. How in the WORLD did the prince and company defeat Anise's minions? Not realistic, even though we're talking about a fantasy world.

For that matter, the fantasy was a bit disappointing? There are mechaniks, which are like any other robot or steel creature or whatever unoriginal nonsense Legrand came up with. Meh. Not impressive. And what the heck are "loks" - I don't even know myself! What was up with that train - are there trains in Cane? What happened to it? I have no idea what happened directly after Nicholas and Clara entered Cane. Anise - not impressive. Selfish, beautiful, young-looking despot, claiming the lands as her own? SOOOOOO original.

The ending was SO WEAK. So I can get past Clara's actions with Anise. Maybe. But then... the ending... the romance... it's "happy", ish, but not really. I can't explain it without giving things away. Time works differently in the "Beyond" world (New York), and in Cane (Nicholas's world). Time moves faster in Cane. So. Um. Yeah. No me gusta al fin.

Meh. I know everyone seems to be excited for this one (hey, I was too!), so go read it. But no, I wouldn't recommend it if you're bored or have never heard of it. Read it if you already WANTED to read it. It's an okay story, the cover is pretty, the hero is likable, and hey, maybe you like scant (and weird) romances, disappointing endings, unoriginal fantasy tropes, bisexual love triangles. I know many reviewers are like OMG SO GOOD, so it might just be me...

1.5 stars -> rounded up to 2 stars. This one wasn't that great... and I didn't love it, like I wanted to. I wouldn't re-read it, nor would I buy it, nor would I pick it up or look at it. Which is totally a shame, because I wanted a hardcover with that cover. Oh well!