Review: The Vault of Dreamers by Caragh O'Brien 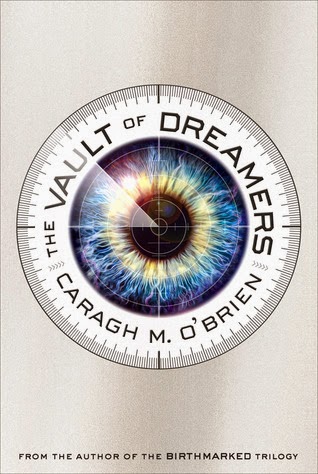 The Forge School is the most prestigious arts school in the country. The secret to its success:  every moment of the students' lives is televised as part of the insanely popular Forge Show, and the students' schedule includes twelve hours of induced sleep meant to enhance creativity. But when first year student Rosie Sinclair skips her sleeping pill, she discovers there is something off about Forge. In fact, she suspects that there are sinister things going on deep below the reaches of the cameras in the school. What's worse is, she starts to notice that the edges of her consciousness do not feel quite right. And soon, she unearths the ghastly secret that the Forge School is hiding—and what it truly means to dream there.

Not impressed. I was not impressed with this book. I'm not sure what I was expecting, but it wasn't this. I think I was expecting more epicness, especially with the setting of the book (a boarding school/academy), the nature of the story (TV reality show), and the science fiction aspects (studying students for dream extraction). Overall, I was massively disappointed and sorely unimpressed.

Rosie Sinclair goes to the Forge School, an arts school in which the entire school is televised as a TV reality show. Rosie wants to be a filmmaker, not an actress, so she's not entirely interested in the drama and fame of being on TV. But she needs to be in the top fifty to stay in the school. She makes the cut, but she realizes that she needs to have a flair for drama in order to make the fifty, and stay in the fifty. However, Rosie has not been taking her sleeping pill, and she realizes that things are not right in this school.

I think my favorite part of this book was the romance, as the story was going. Not at the end, because ehhh. But during the story, the romance was really sweet. I really like Rosie and Linus together - Linus is sweet and blase and thoughtful and down-to-earth. Rosie is humble and observant - she isn't as competitive or cutthroat as some. The two of them are great together, and they work together to help Rosie get into the top fifty. Rosie trusts Linus with her revelations about the school - and this is when the romance hits the crossroads.

Rosie doesn't take her sleeping pill, and she notices things. The students must sleep in "sleep shells", and Rosie sees that some students are wheeled out of the room at night, and taken to who knows where to have who knows what done to them. I was really intrigued by this mystery, even if I had a general idea of what was going on. It turns out I was dead on. Also, the whole big "reveal" of the mystery was seriously anticlimactic. Or really watered down. Or not epic and oh-my-gosh-we're-at-a-school-run-by-insane-people. More on that later. In fact, read on, for my dislikes.

As I before, the climax/"big reveal" was really anticlimactic. I already guessed by then what was going on, and then the climax wasn't even that great. The rising action wasn't all that great either. While I was intrigued and wanted to know what was going on, I feel like the science fiction aspect of the book was drowned out by the TV reality show part. And goodness knows I hated that aspect.

For that matter, I'm seriously confused as to what exactly is being done to the students, and what this data/information/STUFF is being used to do. Yup, the "big reveal" was especially disappointing, since I didn't understand the entire point of the book (the science fiction aspect).

Another thing that was lacking was the feelings of déjà vu , the hallucinations, the voices, everything that made Rosie think she was going crazy and dreaming everything, instead of actually seeing them. Basically, I WAS CONFUSED. And I pride myself in not being confused easily. So many questions go unanswered in this book. Burnham? Do students lose their memories? Why the déjà vu? The voices are what/who? Etc.

Also, it's interesting how this book is set in the wayyyy future. I wanted to see more of how knowing this connected with what they were doing with the students. Like, medically speaking, since they are in the future, should what they're doing be more medically advanced, etc.? Maybe it is, and it was just really poorly described. That could be why I was confused.

I found the family aspect lacking, in this book. We know that Rosie has an abusive stepfather, an enabling mother, and a sweet sister. But I feel like these three characters are just archetypes, and not supporting characters. They're like cardboard figures instead of real people. I wasn't really feeling that aspect of the book, even though O'Brien made it abundantly clear that they were/would be important.

And the ending. What. What. What. I don't think I liked the ending AT ALL. Is this a standalone novel? On Goodreads, the author said she's working on a sequel. Yay? I think that fact alone might save this book a little. I might actually read the sequel.

2.5 stars -> rounded up to 3 stars. Believe it or not, I was really enjoying this book as I was reading. Key words: AS I WAS READING. But the ending sucked and overall, I was left with a bitter aftertaste. I'll probably read the sequel. Unless this is a trilogy (or more). If it's a duology, I can handle that.