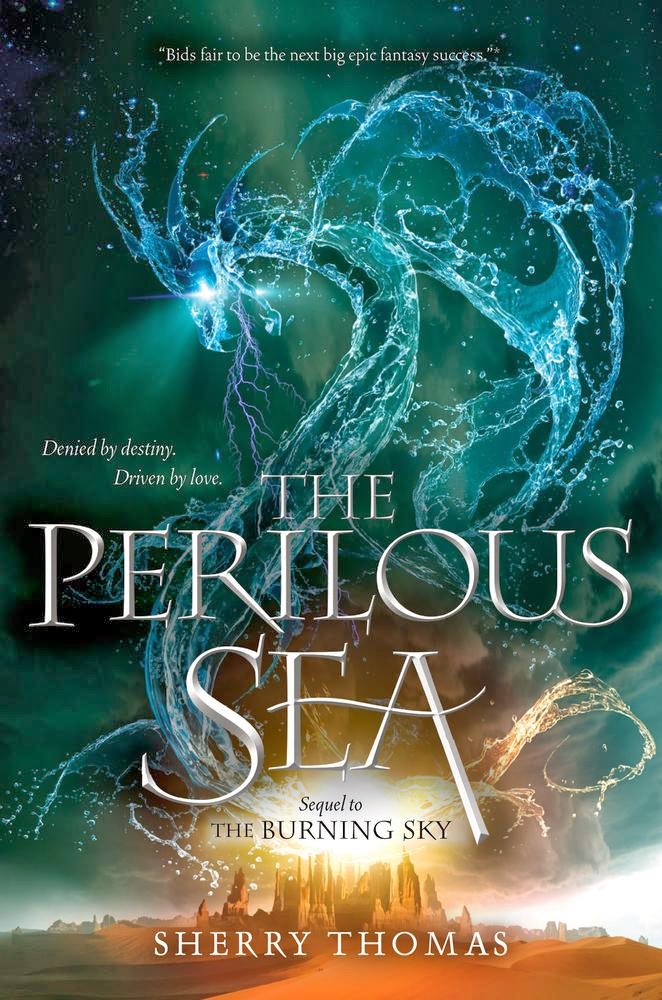 HOLY GUACAMOLE, EVERYONE. This book was intense! It was intense and I LOVED it. Thomas keeps up the pace and the excitement set in book one, but adds twists and turns and puzzles that made this book feel like a pretzel or Twizzlers or something! Mind-blowing, that's what this book was.

Titus and Iolanthe survived the battle with the Inquisitor and the Bane, though the Bane still lives and must be destroyed. After a too-short summer, they find themselves back at Eton, where things just aren't the same. Atlantis seems to come closer and closer to Iolanthe, and even at the non-mage school, the prince and lightning mage aren't safe. Titus discovers new information that could jeopardize everything, and Iolanthe finds herself at a crossroads. As paths unfold and secrets are brought to light, Titus and Iolanthe must remember themselves and the love they hold for each other in order to survive and save everyone.

I admit, I was so afraid of reading this sequel. I LOVED The Burning Sky so much, so I didn't want to read this book and dislike it. I'd rather be ignorant and never know how book two ended up, it seems. Of course, I would never do that to myself, because I'm just too curious and I loved book one too much to NOT read book two. But still, sequel terror is real, everyone. Thank goodness this sequel did not disappoint! As I suspected it wouldn't. Even though I doubted. Oops?

The plot is incredibly complex and labyrinth-like. It amazed me how many twists and turns and curve balls that Thomas threw in this one book! Information was discovered left and right - new information that changed many, many things. Titus relies heavily on his mother's diary, but he soon finds out that his mother's observations of her visions are very... open-ended. Open to interpretation. This complicates things.

Also, there are two plots to this book. One occurs in the Sahara Desert, in which two people (who, of course, are Titus and Iolanthe) wake up in the desert with no personal memories, no memories of themselves, but memories of life in general. They do not remember themselves, each other, how they got there, but they remember about the Bane, Atlantis, etc. This plot worried me a bit, because of course the two people were Titus and Iolanthe. But this plot happens seven weeks after the "real-time" plot at Eton. So what if Titus and Iolanthe never regained their memories?! What if everything is messed up? Ahhh!

The second plot occurs seven weeks BEFORE the Sahara Desert one - but each plot is told simultaneously. So it's like we know the past (while we are in the Desert chapters), or the future (while we are in the England chapters). It's weird to think about, and it stressed me out to read the to (I hate dual plots like that, in which they are not synced in the same time, but one is in the future), but this one really worked, and the ending was very satisfactory.

Titus... I love Titus. I loved him in book one, and while he annoyed me a tiny bit with his unshakable faith in his mother's diary, he still amazed me in general. That boy is so powerful, so collected, so intelligent, so cautious. He's literally perfect without always acting or seeming perfect, necessarily. He never sleeps and is always taking care of others, so he definitely seems like a martyr, and not a spoiled prince. Titus, I'll be your Chosen One elemental mage any day...

And Iolanthe - I really like her. One of the things I really like about non-alternating dual perspectives in third person is that I usually like the protagonists more when the perspectives are in the third person. Iolanthe goes through a lot, emotionally, in this book, and I'm glad we witness that via third person narrative. I love that Iolanthe did and did not give up on Titus. I love her decisions in the end.

The ending! Oh my heart. I thought the ending would never come - I was so fearful for so many things. Things ended to my liking, not necessarily perfect, but to my liking. I LOVE how Thomas built this trilogy - the third book will be EPIC. The war with Atlantis and the battle against the Bane will definitely make a remarkable - INSANE - conclusion to an intense and immensely creative series!

Just a few small things, things that are definitely "Alyssa quirks". I really don't like the dual plot lines, in which one is in the future, so we know what WILL happen, because we see it happening in the future, as the "present" is also happening. It's not that it's confusing, but I just hate ALREADY knowing. And in this case, Titus and Iolanthe suffer from memory loss in the "future". Will they ever remember everything?! Will they ever love each other again?! Will they know who they are and their roles in the war against Atlantis?!

Of course, this just makes the book that much more infuriatingly engrossing - I just had to know, without looking at the ending, of course. So it's a good and bad thing!

Also, one thing I also mentioned in the dislikes of book one - more romance, pleaseeee! More Titus and Iolanthe. Alone. Together. Not trying to save the world or save each other. Another reason for an epic conclusion. *winks*

YEEEEEESSSSSSSS!! THE SERIES, IN GENERAL!! Definitely read The Burning Sky if you haven't already, and be sure to catch this sequel. Historical fantasy at its finest, in my opinion! You won't regret the decision to start this series.

4 stars. More like 4.5 stars. I am convinced that book three will blow us all away and that it will be the best book of the series. I AM READY!