Review: As Long As You Love Me by Ann Aguirre 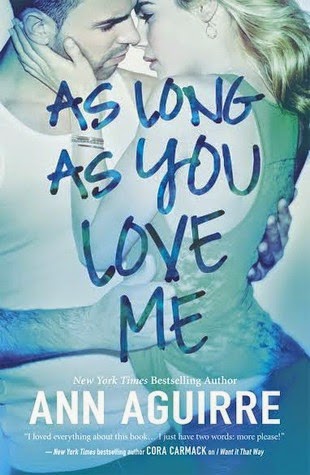 As Long As You Love Me by Ann Aguirre
Book Two of the 2B trilogy
Publisher: Harlequin HQN
Publication Date: September 30, 2014
Rating: 4 stars
Source: eARC from NetGalley

Most people dream about getting out of Sharon, Nebraska, but after three years away, Lauren Barrett is coming home. She has her reasons—missing her family, losing her college scholarship. But then there's the reason Lauren can't admit to anyone: Rob Conrad, her best friend's older brother.

Football prowess and jaw-dropping good looks made Rob a star in high school. Out in the real world, his job and his relationships are going nowhere. He's the guy who women love and leave, not the one who makes them think of forever—until Lauren comes back to town, bringing old feelings and new dreams with her.

Because the only thing more important than figuring out where you truly belong is finding the person you were meant to be with.

Anyway. So. Lauren is back home. Her mom is dating some guy named Stuart (totally okay with Lauren), Rob is still dating Avery (hopeless feelings), and Lauren is struggling to find a job, so she can buy a car, pay for her online classes... Lauren meets Rob in the grocery store. They start hanging out, fixing a house that he bought to flip. Rob breaks up with Avery (you'll have to read to see why) - but Lauren would never announce her feelings to Rob. Unless Rob noticed her?

Like I said before, I wasn't sure what to expect from Rob. I didn't like that he was with Avery in book one - but I understand him now. Rob is such a sweetheart. He's four years older than Nadia and Lauren, and he's got confidence issues. No one thinks he's good enough, smart enough, but he's hot enough. He's good-looking enough for anything. They don't see his talent with making furniture and remodeling houses and construction projects. Rob is super hot, super physical, super sweet, and super honest. He's every girl's dream, without seeming cliche.

I like Lauren. She has her quirks (crowds, drinking to cope, etc.), but she's highly organized, detailed-oriented, tech-savvy. She's a genius - but since she failed out of college (on purpose though) and came home, everyone thinks she's knocked up or stupid (or both). But she works hard to get a job, take classes, etc. Lauren is a good person, and she's been completely in love with Rob since they were teens. Good thing he's been in love with her for quite some time - not as long as she had been. but long enough.

One of the things that I like more about this book than the last book is how fast the romance/relationship gets started. Lauren and Rob already know each other, but sparks start to fly from when they meet in the grocery when Lauren first comes home. Something specific happens, and Rob breaks up with Avery. Then it's all Lauren and Rob. It's not insta-love by any means, but I like that the buildup for them to state their feelings and get together didn't take long. But then, the intimacy... that took a while. I approve though - it was fun to watch the two of them get sexually frustrated!

I love the romance. The relationship is built beautifully - you can see the trust and love crafted into the romance. It's not just physical with these two, it's not just about them being friends since they were young... all of that is great, but they also love each other, and I like how this is developed.

The conflict/climax is well-crafted as well! It's not drama-filled and angst-ridden and cliche. Okay, there is heartbreak and angst, but the time apart is very much needed and well-spent. Distance definitely made the hearts grow fonder, in this case.

Basically, I enjoyed this book! I love that Aguirre can create imperfect characters without them being broken, beautiful romances without unnecessary drama, and really great New Adult contemporary romance novels without me vomiting in disgust! That's actually a high compliment. Heh.

I can't think of anything at the moment - but this one is getting a solid four stars!

Yes! I love Aguirre's books, but I'm really enjoying her New Adult books. Coming from the New Adult who hates New Adult books, this is a big deal. So. Read book one, at the very least! But I also really liked book two, possibly more than book one.

4 stars. So far so good! I'm not Courtney's biggest fan (thinking of book three), and I'm not sure about how I feel about her ending up with Max... but I like Max a lot!