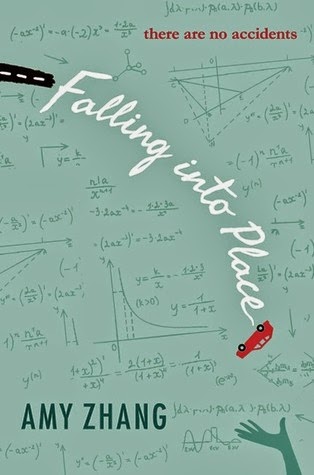 On the day Liz Emerson tries to die, they had reviewed Newton’s laws of motion in physics class. Then, after school, she put them into practice by running her Mercedes off the road.

Why? Why did Liz Emerson decide that the world would be better off without her? Why did she give up? Vividly told by an unexpected and surprising narrator, this heartbreaking and nonlinear novel pieces together the short and devastating life of Meridian High’s most popular junior girl. Mass, acceleration, momentum, force—Liz didn't understand it in physics, and even as her Mercedes hurtles toward the tree, she doesn't understand it now. How do we impact one another? How do our actions reverberate? What does it mean to be a friend? To love someone? To be a daughter? Or a mother? Is life truly more than cause and effect? Amy Zhang’s haunting and universal story will appeal to fans of Lauren Oliver, Gayle Forman, and Jay Asher.

This debut novel came highly recommended by like, everyone, so of course I snatched it up from Edelweiss when I saw that Harper had uploaded it, months ago. It's contemporary, and "tough-issue" contemporary at that, but the synopsis intrigued me. A book that is told in three stages - before, during, and after the car crash? That's different. I've never read any of Forman or Asher's books, and I hated any Oliver books I've read, so I didn't really have high expectations for this one.

Liz Emerson gives up on living, and decides to plan her suicide. She will crash her car, far away so no one will find her, in the afternoon/evening, in an "accident" that will look like an accident, but it's really a carefully planned suicide. But what went wrong? Why did Liz want to kill herself?

Obviously I didn't like this book. But one of the redeeming qualities I found was the writing style of this book. More like, the structure of the book? Or perhaps both. Zhang's writing is very clear, very smooth, not quite lyrical, but somewhat poetic. I enjoyed READING this book, even if I didn't enjoy what I was reading.

The structure is kind of cool. It flips between during the car crash (what Liz is thinking as she is about to crash her car), before the crash (how everything spiraled out of control), and after the crash (at the hospital, at school, etc.). I know it might seem random and broke-up and weird, how Zhang does this, but really, it's genius. Zhang places every scene, every chapter, ever "before/after" with purpose. This is really well-done!

Now, read on, to see what makes me of the unpopular opinion.

First, I don't usually like "tough-issue" contemporary novels. I've enjoyed a few, like Patty Blount's books. But for the most part, key things about these books piss me off. Usually, it's the heroine, or the bulls*** that the heroine does or makes up or suffers in her mind. Usually, it's all in her head. And it's such bulls***.

In this book... well, I'll just go ahead and say it: I HATED Liz Emerson. I HATE girls like her. Liz Emerson ruined the lives of basically her entire school. She humiliated the one boy who actually liked her, by turning the whole school on him, and turning him into a joke. Who the f*** should get away with ruining a boy's life, having everyone starts rumors that he's gay, or weird, or mentally unstable, or perverted. She caused a girl to not go to college, and to work at a crappy store or restaurant (yup, this is no joke). She got one best friend addicted to weed (or is it crack?), and didn't defend another as boys took that friend upstairs at parties. And boy, there is so much more.

What. An. Awful. Person. I don't forgive Liz for anything she did, for any of the pain that she caused. People like her deserve everything that they did right back in their face, in my opinion. I know that's not great to say... but what she did to others was beyond CRUEL. There is no adjective for her actions, her decisions, her apathy. It's so unbelievable infuriating ESPECIALLY when she KNEW she was doing the wrong thing, making the wrong choices, ruining someone else's life, but she kept. On. Doing. It.

No one "contributed" to her suicide, like SHE contributed to other people's suicides or ruination. She directly and indirectly ruined other people's lives, but no one directly or indirectly ruined hers. No, she did that all by herself. She ruined her life by making s***ty decisions and dragging everyone down with her. She had SO MANY CHANCES to stop, so many chances to remember her humanity, so many chances to stop doing the wrong thing... but she never did. It's like she half-hated what she was doing, half-reveled in it. B**** DOES NOT EVEN COVER WHAT I THINK OF HER.

Honestly, girls like these, I don't say anything to, and I don't interact with. Because as soon as someone else lashes back, the girl contemplates suicide, or harassment, or shuts down. You have to be strong and withstand all of her harassment and the humiliation, but as soon as she feels some, she crumbles and everyone must feel sorry for her. This ISN'T what happens to Liz - she crumbles under self BECAUSE of herself and her decisions, but this is just an observation of mine.

I said something on Twitter about cruel people in general - cruel people aren't ever "sorry" or "regretful" of what they do to others until others are physically hurt, on the outside. The thing is, Liz wasn't even sorry then. She wasn't sorry when she ruined the reputations of others, the credibility of others... or when a girl got hooked on drugs, another committed suicide, etc. She never stood up for anyone (except that ONE time, and OMG, Liz is a hero now).

I hate Liz. I hate the "romance" (there is none, the attempt at it was atrocious). I hated the supporting characters. I hated the ending. Oh my gosh. I hated the ending so much. Literally the worst ending ever. And the "mystery" of the narrator? So obvious. I knew from the start. UGHHH, SO MUCH PENT-UP RAGE!

(I'm writing this review days after reading the book. I thought I would be less angry at the book, but I'm not.)

No. No no no no no no. I know a lot of people are super excited to read this book, and a lot of reviews are super positive, and I'm probably going to get bashed because OMG YOU DON'T FEEL SORRY FOR A GIRL WHO TRIED TO COMMIT SUICIDE?!

1 star. That 1 star comes from the great writing style and the structure of the story, Amy Zhang's got talent, I must say that. But this book... it really hit a nerve. I feel disgusting, just thinking about it, sadly.