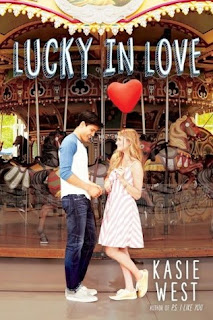 In this new contemporary from YA star Kasie West, a girl who wins the lottery learns that money can cause more problems than it solves, especially when love comes into the picture.

Maddie doesn't believe in luck. She's all about hard work and planning ahead. But one night, on a whim, she buys a lottery ticket. And then, to her astonishment --

In a flash, Maddie's life is unrecognizable. No more stressing about college scholarships. Suddenly, she's talking about renting a yacht. And being in the spotlight at school is fun... until rumors start flying, and random people ask her for loans. Now, Maddie isn't sure who she can trust.

Except for Seth Nguyen, her funny, charming coworker at the local zoo. Seth doesn't seem aware of Maddie's big news. And, for some reason, she doesn't want to tell him. But what will happen if he learns her secret?

With tons of humor and heart, Kasie West delivers a million-dollar tale of winning, losing, and falling in love.

Well, it finally happened. I rated a Kasie West book below four stars. I've read all of her books - Pivot Point, Split Second, The Distance Between Us, On the Fence, The Fill-In Boyfriend, P.S. I Like You, By Your Side, and now this book - and sadly this has been my least favorite. Don't get me wrong, I still enjoyed the book. I just didn't love or really like it. Some aspects were great, and other aspects were a little disappointing, given my expectations.

Maddie has just turned eighteen and she is having a terrible birthday. On an impulse - rare of her - she buys a lottery ticket for the $50-million-dollar lottery. And she wins! Suddenly she has enough money to pay off her family's home debt, her brother's college debt, to give her parents and brother each one million dollars, to throw massive parties, to buy really expensive clothing, to buy herself a sports car... but money doesn't buy happiness and it certainly doesn't fix every problem. She doesn't know who actually likes her for her, and she doesn't know who to trust. Only Seth Nguyen, co-volunteer-worker at the zoo and fellow senior at a difference high school, doesn't treat her differently - he has no idea that she is a multi-millionaire. Maddie doesn't want to tell him because she doesn't want him to act like everyone else around her. But she doesn't want to be dishonest with him either. What happens when he finds out? What happens when someone betrays her - someone close to her?

This book had many strong points. For one, I adored Maddie's work ethic. I was Maddie in high school - top five student, brainy, known for being smart and dedicated and constantly studying. Maddie has her choice of colleges and with her windfall, she can pay for whichever college she wants. In the beginning, Maddie is reserved and a little timid - she thinks things through and doesn't act spontaneously. But after she wins the lottery, she starts hanging out with the "popular" crowd and changes. She doesn't become snobby, but she becomes more assertive and confident. Maddie is a likable heroine, and I felt for her, with all of the drama that came with winning the lottery. It felt very real to me - I wonder if the author interviewed past winners of multi-million-dollar jackpots.

Which leads me to another really well-written aspect of the book - all of the drama that goes with winning the lottery. Maddie begins spending money in chunks, without any thought. She doesn't see a financial adviser and probably should have, from the start. Everyone finds out that she won (despite her discretion), and suddenly everyone wants to be her friend. Maddie gets sucked into an expensive lifestyle that catches up with her when record of her expensive lifestyle gets caught and spun into a very negative light. Maddie kept making questionable choices and I wanted to scream at her to stop but I loved that she made these choices, because it made the story feel more real and authentic.

There are a lot of positive relationships in this book. Maddie has a good relationship with her parents, despite her parents having a terrible relationship with each other. She and her brother have a fun camaraderie, despite her brother being terrible with responsibility and money. Maddie's two best friends are supportive and fun. I like how the girls went through a lot of obstacles throughout the book, and didn't simply have a perfect friendship throughout the story. Maddie makes some new friends too, some positive, some negative. And then there is Zoo Seth (just Seth, but that's a reference!), who is an easygoing, kind guy who likes everyone and is liked by everyone. Seth and Maddie are friends, but Maddie has a crush on Seth that has been growing and growing.

I'll talk about the romance in the next section.

The story is entertaining, though filled with drama in the second half of the story. While this felt authentic, it could be tiring at times. I liked the ending a lot though - it was a great ending that didn't involve a ton of drama, though the story definitely did overall. No one does a HEA better than Kasie West!

I'm so sad that I didn't enjoy the romance. I expected the romance to be sweeping and exciting, especially given the title and cover of the book. And because Kasie West writes such good contemporary romance novels. The romance in this book? Was boring.

I feel like Seth and Maddie would have worked better as "just friends". I just wasn't getting a romantic vibe from either of them, or a sexual vibe ("dang his arms in that shirt", "omg his hair looks extra floppy today", "mmmm those cheekbones" - you know what I mean). Their relationship was very friendly in a friend sense, and they got along really well, but I wasn't getting a "relationship" vibe from them. Yes, your romantic partner should be your best friend, but I wasn't getting any romance or sparks flying or that sort of thing.

Does that make sense? The romance seemed dry and boring. Maybe too subtle? I don't know. I just wasn't sold. When Seth proclaimed his feelings, that felt too surprising to me, because I wasn't getting any romantic vibes from him. We read from Maddie's first-person POV and even from her, I wasn't feeling the romance.

Seth was so one-dimensional! He felt like a cardboard cutout or something - too perfect and sweet and friendly, with no depth. There were small parts to him that West shined a light on - how he isn't good at math, how he hates when people ask him where he is "really" from, etc. But overall, Seth didn't seem like a real person to me, let alone a protagonist in this book, let alone a love interest (the love interest).

And then there was the drama. Yes, I felt like the post-lottery drama was authentic. But it was a lot of drama! It took away from the light and fun and humorous and romantic mood that the book was supposed to be portraying. Instead the story felt bogged down and tense.

I feel like the trademark Kasie West humor and snark was missing in this story. Which is sad, because the snark was always so fun to read, in her previous books.

Anyway, like I said, I enjoyed the book for the most part. But it disappointed me a little.

I recommend this book because I'm on the fence with it (a true three-star rating) and all of my "complaints" could very well just be me (I don't think so though). This book wasn't West's best, and it isn't a new favorite of mine. I enjoyed it overall, but I can't see myself rereading it. I didn't swoon nearly as much as I'd hoped! I shared a swoony excerpt on my Swoon Thursday post but in general, this book needed more swoon in the romance. The romance was disappointing. So, I do recommend the book especially if you're a huge West fan like me, but I don't recommend it if you've never read any of West's books. Start with one of the others!

3.5 stars -> rounded down to 3 stars. I enjoyed the book, but I didn't love it. Sadly this won't be my new favorite book of West's. But I am still very much looking forward to reading new stories by her - especially her upcoming companion series with HarperCollins!