Hi friends! Welcome to the Bad Romance blog tour, in celebration of the publication of Heather Demetrios's latest novel. This book was 20 years in the making, and it tells a powerful story. Today, I'm going to tell you my own "bad romance" story.

I want to preface my story by saying that this happened in college, my freshman year, which was only  less than four years ago. This "bad romance" may not be nearly as physically damaging as other bad romance stories, but it is emotionally and mentally "bad", and I think any girl in college (or even high school) could understand or learn from my experience.

I'd just moved into the dorms, and orientation had begun. The people living on my floor were so different and cool! I lived in the "athletes building" (despite not being a university athlete), so most of my floor-mates were swimmers, baseball players, basketball players, rugby players... and soccer players. Four soccer players lived on my floor - two in a dorm next to mine, and two across the hall. One soccer player living across the hall (let's call him M) would become a close friend whom I'm still friends with. Another soccer player living next door (let's call him V) would become the subject of this bad romance story.

We met when I was chatting with a non-athlete friend who lived in the same dorm as M (let's call him B), outside of B and M's dorm. I introduced myself to V and he said his name was "Pablo" and he is from Australia - lies, because he is such a goof. Later, I found out that his name is ___ and he lives in the dorm next to mine. I wouldn't say I developed an instant crush on V, but I liked his sense of humor and his easy smile. He was funny, charming, and very, very cute. And he knew it. Athletes - especially soccer players - usually have these egos, y'all.

Classes started a few days later and surprise! V, M, and a few other people on this floor have a few mutual general science classes. Our first assignment for the General Chemistry class rolled around, and I finished it early (like the nerd that I am). I helped my roommates with the assignment and word got around that "Alyssa is really good at Chem! Go ask her for help!".

Most of the other people in Chem on the floor worked with each other, but V asked for my help. I was tickled pink - a cute, popular, charming guy wanting to spend time with me? It didn't matter that he was asking for help and it was a study thing only - I was flattered and starstruck. Of course I said yes. Of course I helped him on the assignment (and he got an amazing grade). Of course he asked for help on the next assignment. And the next. And the next. And help studying for the midterm. And then the next assignment. And the labs. And...

I started to really realize that he only talked to me when there was an assignment due, a lab to be done, or an exam to study for. We hung out a lot, after studying, but he didn't really interact with much outside of our study sessions. Which eventually started to bother me (though not at first).

It turned into a cycle, a cycle that he picked up on: an assignment would be due, he would text me, I secretly get excited and then agree to meet up, we would have a productive study session and hang out afterwards, and then we would part ways. I would feel dissatisfied and annoyed after the session, and in the days following, I would text him and try to chat about Other Things. He would text back once a day at like 3:00 AM and it would be a one-word answer. I would be annoyed and stop trying to communicate. An assignment would be due, and he would play nice and text me something like "hey how are you", and then follow up with "do you wanna do chem together?". And the cycle continues.

By the end of Fall semester of freshman year, I was pretty much entirely in love with him, and I still had stars in my eyes. By the end of the Spring semester (in which we still had mutual classes), I was irritated and still lovestruck and also despondent, because of the upcoming summer - and the fact that we wouldn't be living in the same dorm building during sophomore year, let alone the same floor.

AND YET. The cycle started up again... because we were in a class together. I knew better, and yet I let him waltz right back into my life. I wasn't ready to let go. I knew how toxic and harmful and hurtful the relationship was (whatever you want to call it), but I didn't pull away.

I metaphorically kicked V out of my life on New Year's Day in the middle of my sophomore year - January 1, 2015. I remember making a conscious decision not to seek him out. Not to text him. Not to call him. Even if we shared classes together, I was going to ignore him.

I will tell you right now - that was so difficult, and it took me nearly a year to feel like myself again. I didn't realize how much I relied on his unspoken approval and how much my self-confidence depended on him. My self-confidence took a huge hit over the next year. I didn't put myself out there, I didn't try to meet anyone new, I didn't even go out with my friends to have fun. I was emotionally and mentally wrecked by the absence of this boy, whom I can't even call a ex-boyfriend. He's some sort of "ex" that I can't classify.

I'd always been fairly self-confident, before V. About a year after slicing him out of my life, I started to gain confidence. I started to do more social things with my friends - and make new friends. My love life was (and still is) pretty dead, but this was what I wanted - I wanted to love and appreciate myself before entering any type of emotionally invested relationship again.

I didn't realize how damaging my relationship with V was, even if it wasn't a physically abuse relationship. Maybe it wasn't quite emotionally abusive either - though he used me and he knew what he was doing. Do I miss him as a friend, someone who was easy for me to talk to and hang out with?Yes, absolutely. Do I miss him in general? Meh. I don't think so. And to be able to say that shows that I've come a long way.

Moral of the story (there are two): (1) when you know you're being used, especially emotionally, especially by a loved one or a friend or boyfriend or girlfriend or whatever, get yourself out. And (2), love yourself first, girl. 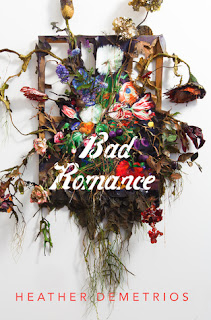 Grace wants out. Out of her house, where her stepfather wields fear like a weapon and her mother makes her scrub imaginary dirt off the floors. Out of her California town, too small to contain her big city dreams. Out of her life, and into the role of Parisian artist, New York director—anything but scared and alone.

Enter Gavin: charming, talented, adored. Controlling. Dangerous. When Grace and Gavin fall in love, Grace is sure it's too good to be true. She has no idea their relationship will become a prison she's unable to escape.

Deeply affecting and unflinchingly honest, this is a story about spiraling into darkness—and emerging into the light again. 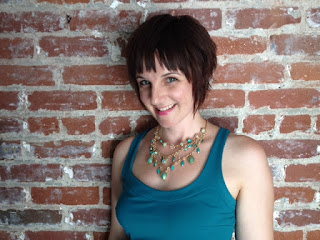 When she’s not traipsing around the world or spending time in imaginary places, Heather Demetrios lives with her husband in New York City. Originally from Los Angeles, she now calls the East Coast home. Heather has an MFA in Writing for Children and Young Adults from Vermont College of Fine Arts and is a recipient of the PEN New England Susan P. Bloom Discovery Award for her debut novel, Something Real. Her other novels include Exquisite Captive, the first in the Dark Caravan Cycle fantasy series, I’ll Meet You There and the multiplatform serial novel, The Lexie Project. She is the founder of Live Your What, a project dedicated to creating writing opportunities for underserved youth. Find out more about Heather and her books at www.heatherdemetrios.com, or come hang out with her on Twitter (@HDemetrios) and any number of social media sites.

Week One:
May 30th – Dark Faerie Tales – Blogger: 5 advice tips to give my younger self
May 31st – Swoony Boys Podcast – Author Interview
June 1st – Tales of the Ravenous Reader – Blogger: Tips for encouraging self worth
June 2nd – Pink Polks Dot Books – Blogger: Red Flags to Look Out For
June 3rd – It Starts at Midnight – Blogger: Some signs that I wish I had seen