Review: Too Close to Call by Tessa Bailey 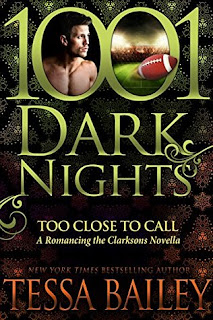 I don't give five-star-ratings very often. In fact, of the 200+ books I read every year, less than 10% of them receive a five-star-rating. Five stars, to me, indicate a new favorite, a book I'd want to reread, a book that I loved and will cherish. Too Close to Call is definitely one of those books.

This novella is part of the 1,001 Dark Nights collection, but it is also part of the Romancing the Clarksons series. I've read Too Hot to Handle, Too Wild to Tame, and Too Hard to Forget, and I'm enjoying the series. But this book - Too Close to Call - is definitely my favorite.

Kyler and Bree dated for years, since middle school. But at the end of senior year of high school, Bree broke up with Kyler. Kyler went to school and became a football star, and Bree stayed at home, working on her dad's farm and slowly getting her veterinary credentials. She really wants to go to vet school but can't, because her father hasn't been able to work as much, and they need the money in order to send Kira (Bree's little sister) to college. Four years later, Kyler is back in town, fresh from the NFL Draft, in which he was chosen as a draft pick by the L.A. Rage. Kyler has never stopped loving Bree, and Bree has never stopped loving Kyler. This much is obvious when they reconnect instantly, despite Bree's hesitation and Kyler's broken heart. Kyler is determined not to leave town without Bree by his side as his fiancee.

This novella wasn't filled with a ton of drama or angst, like many second-chance romances. I love that Kyler was so determined to win Bree back. I love how both Kyler and Bree never dated over those long four years - they were never with anyone else. The heart knows what it wants, and in both of their cases, they wanted each other and only each other.

Kyler is my type of guy! He's a charming, sweet, slightly overconfident athlete who isn't a dumb jock or an arrogant one, or one that knows he's sexy and indulges in the attention of everyone. Kyler is a sweet guy, but he is also very stubborn and very determined. He isn't aggressive but he goes after what he wants and he doesn't take no for an answer. Kyler isn't a hard guy to love - in fact, he might be one of my favorite NA heroes.

Bree... I wasn't sure about her at first, because she broke up with Kyler for a stupid reason. She decided not to go to college (which had been their plan - to go together), because she wanted to stay back and help her father with the farm. She gave up her life for her father's responsibilities (noble, but stupid) and to take care of her younger sister, since their mother walked out of their lives. Bree is selfless when it comes to her family. I'm glad she suffered for making that terrible decision (to break up with Kyler). I'm glad that she couldn't be with anyone else, and how she thought about Kyler all the time. Bree was guarded and hesitant when he came into town, and I almost wanted Kyler to give her the cold shoulder. But I think Bree suffered as much as she should have, and she deserved a good ending as much as Kyler did.

These two are on fire! Such a steamy couple, with lots of intense, sexy chemistry. There is four years worth of chemistry stored up in each scene, so that one or two steamy scenes were pretty hot. Tessa Bailey always knows how to write a hot sex scene, and she never disappoints. There was a little dirty talk in this book that wasn't over the top.

Besides this being a hot romance novel, I love that there are some important relationships in this book. For one, Kyler has to win over Bree's dad, the one guy that never really showed any liking towards Kyler. But I think Samuel Justice always loved Kyler, and wanted him for his daughter. That relationship was important, and I like that Bailey made it big part of the second half of the book. Bree and her dad have a conversation that is very important to the story, and I'm glad her father said what he did. It was also great to see Kyler and his mother interact as well (they have a great relationship).

One of the things that I loved about this book is that in the climax, in the inevitable scene when one of the characters has to make a choice and run after the other, it is Bree that does this. She makes the realizations, such as the fact that she has not been vocal about she wants with Kyler, whereas he has laid it all out for her (what he wants). She runs after him. She makes some decisions. I love this! She was the one that broke his heart years ago. Honestly, my like or dislike for this book was going to depend on one thing -- whether or not BREE was the one to apologize and grovel and do the chasing, because she was in the wrong, years ago. And she did. I'm very happy about this!

Overall, I am so happy with this novella. It was a perfect addition to the series, and a fantastic 1,001 Dark Nights tale. Tessa Bailey always has me entertained and full of feels, and this book was a very big hit for me.

Nothing to say here! Everything that I wanted worked out perfectly, was written perfectly, happened perfectly. Perfect!

4.5 stars -> rounded up to 5 stars. I don't give this rating often but when I do, it always makes me extra happy. I want to reread this novella already! Such a sweet, sexy, and swoonworthy story. I adore Kyler and I'm glad he and Bree got the HEA they deserved.