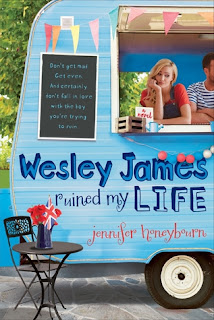 This book was adorable! Light, cute, and a quick read - exactly what I needed at this present time. I had a good feeling about this book and I'm glad it went my way. I'm not a huge YA contemporary fan, so I try to be as selective as possible when I read them. This book was worth it!

Quinn life is not so great at the moment. The one bright spot is that she's going to London with her high school's band over the summer, which is going to be awesome, since Quinn has been dreaming of going to London for years. She has to work often at Tudor Tymes restaurant to come up with the money for costs, but it's worth it. With everything else going on, she needs this. Her grandmother was diagnosed with Alzheimer's and the family had to put her in a home. Quinn's parents have been divorced for several years, and her father has not been able to get back on his feet since the divorce. He has no job and is constantly gambling. And then there is the source of all of Quinn's problems - Wesley James, who recently moved back to Seattle, after living elsewhere for five years. Quinn wants to exact her revenge on Wesley, but the more she schemes, the more she falls in love with him. Would it be so bad to fall for the guy whose life you're trying to ruin?

I'm not really big on second-chance romances so I was a tiny bit apprehensive about this one, at first. But it's not a second-chance romance at all. Quinn and Wesley were childhood friends for years, until they were eleven years old, when Quinn and his family moved to Portland. The going-away party was the night that everything changed - in which Quinn and Wesley fought, and then Wesley did the thing that Quinn thinks ruined her life forever. Five years later, Wesley is back, and Quinn still hasn't let go of that grudge.

Quinn is hilarious, even if her rationale was a little misguided. She likes doing things by the rules, which Wesley thinks makes her uptight, and she doesn't really play around. She is stubborn and really good at holding a grudge, which I found more impressive than anything else. I liked Quinn a lot, more than I thought I would. I could relate to her on some level, whether it was her annoyance with the customers in the restaurant, working at the restaurant in general, dealing with a boy she didn't want to see ever again, etc.

Wesley is a charming sweetheart. Everyone likes him, and it's no surprising, since he is charismatic and fun. He tries very hard to have conversations with Quinn and get along, but she is never having it. Wesley is just as stubborn as Quinn, though in his case, it's persistence. He's a good guy, not a sleazy or douche-y character. I would have loved to meet and fall for a guy like him in high school (or college!).

The romance is kind of there, though there is only one kiss between these two (and it's at the end!). I loved seeing them reconnect in their own way (Wesley trying to make nice, Quinn stubbornly having none of it, circumstances forcing them together, etc.). They have a subtle chemistry that was fun to watch unfold. I wanted more actual swoon, but the romance was cute nonetheless.

The story doesn't just deal with Quinn trying to ruin Wesley's life and her falling for him instead. I like how the focus is also around Quinn's dad (who is broke and jobless and has a gambling problem), Quinn's grandmother (who both Quinn and Wesley loved), and really, Quinn's family in general. Family is an important part of this book, in a subtle way. And Quinn's friendship with her bestie Erin - I loved their relationship! Such a lovely friendship.

I liked the light, humorous tone of this book. So many funny times in Tudor Tymes, or with the band, or in a truck. Lots of serious times too, or moments filled with some yummy tension. But the overall tone of this book is humorous, and I liked that.

This book ended really well, exactly how I was hoping it would end. It's a great ending, one that Quinn deserved. I really enjoyed reading this book and would probably reread it in the future!

The thing I've noticed about Swoon Reads books is the lack of actual swoon. Where are the scorching kisses? Warm, tight hugs? Almost kisses? KISSES? There was only one kiss between Wesley and Quinn, and it was at the end, and it was very short. More swoon is needed, especially for a cute and chemistry-laden romance like this one!


4 stars. I will definitely be keeping an eye out for more books by Honeybourn in the future. Hopefully more Swoon Reads books, with more swoons. More kissing is always good!