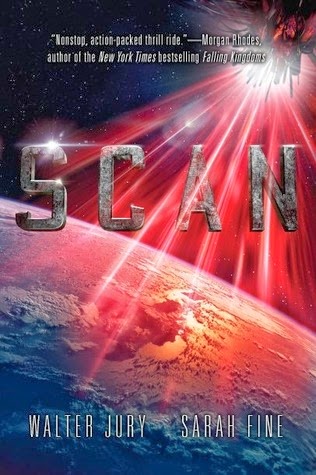 Tate and his father don’t exactly get along. As Tate sees it, his father has unreasonably high expectations for Tate to be the best—at everything. Tate finally learns what he’s being prepared for when he steals one of his dad’s odd tech inventions and mercenaries ambush the school, killing his father in the process and sending Tate on the run from aliens who look just like humans.

All Tate knows--like how to make weapons out of oranges and lighter fluid--may not be enough to save him as he’s plunged into a secret inter-species conflict that’s been going on for centuries. Aided only by his girlfriend and his estranged mother, with powerful enemies closing in on all sides, Tate races to puzzle out the secret behind his father’s invention and why so many are willing to kill for it. A riveting, fast-paced adventure, Scan is a clever alien thriller with muscle and heart.

I am three for three, when it comes to LOVING Sarah Fine's books! That's talent right there - the fact that I've really, really liked three separate books of hers, of two different series. I have her fourth full-length novel, Of Metal and Wishes, and I'm pretty excited about reading that one.

This book is completely in Tate's point-of-view (first person), and I truly enjoyed reading from his perspective. The book begins with Tate losing in the semifinals of wrestling tournament, and dreading the weight of his father's anger and disappointment. Tate wants to spend time with his girlfriend and scale back a little with the insane workout and education regimen that his father has him doing. A stupid mistake is what brings hell on earth. Tate goes into his father's lab, steals a piece of technology, and brings it to school. It's not long before Tate, his girlfriend, and his mother (whom he hasn't seen in quite some time) are on the run from people who want the scanner back.

This book is extremely science-fiction-based, and I absolutely love this. Tate's father is a scientist, his mother is a scientist, and Tate himself is a science genius. Of course, Tate uses his science knowledge to play silly (but brilliant) pranks in school. Tate's extensive educational training comes in handy many, many times in this books, and I loved that Jury and Fine included them in the scenes.

This book is also considered a thriller, which I think is highly accurate. I love the fast pace of the story, the way the plot kept moving and moving. No one part of the book was particularly slow or extremely fast - the overall pacing was excellent. When books drag in places, it makes it hard to keep reading. I had no such problem with this one.

I really like Tate, as the protagonist and hero of the story. He is very intelligent, as well as loyal, cautious, and headstrong. I feel like I would totally crush on him, if I knew him in real life. Athletic, muscular, wicked, AND brainy? That's one toxic combination - my favorite.

I also liked the supporting characters - Christina, Mitra, George, and several others. Jury and Fine did a great job of developing each character, as well as keeping the amount of characters low, so that readers wouldn't get insanely confused with names and personalities and whatnot. I liked Christina and Tate together, even if they have things they need to work out.

The overall issue of this book deals with aliens who look like humans. The human population is about one fourth of what it is right now, and the rest are aliens. However, most of the human-looking aliens on the Earth don't know that they're aliens. So that makes it difficult to completely hate the aliens - most of them have no idea that they are aliens. How can you annihilate a species, when everyone (including many of them) think they are the same?

Overall, I am seriously happy and impressed with this book. The alien theme is quite catchy this year and last year, but I'm okay with that, because I LOVE science fiction, and you can't do aliens without science fiction. I love that Jury and Fine make this book very, very realistic, instead of playing it down and making it seem more paranormal or supernatural (NOT contemporary, basically). I have been so excited to read this book, and I'm pleased that it turned out to be amazing!

There wasn't much that I really didn't like in this book. It flies by and I was interested the entire time. There were questions that I had as I was reading, and at the end, like why exactly the scanner was THAT important, if all it did was... well, what it did. But I'm hoping that my questions will be answered in the sequel, so I'm not going to worry about it too much!

If you like science fiction novels, then I would highly recommend this book! Don't miss it if you are a science fiction fan. If you're not a science fiction person, I would still recommend it. The story is fast-paced and quite intriguing, so it's easy to get caught up in the craziness, and want to know what happens next. I was really excited to read this book for months, and I'm glad I was not disappointed! Yay for that.

4 stars. What a fun ride! I definitely cannot wait to read the second book in the series.