Review: The Falconer by Elizabeth May 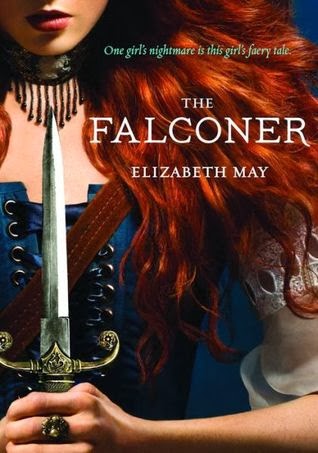 The Falconer by Elizabeth May
Book One of The Falconer series
Publisher: Chronicle Books
Publication Date: May 6, 2014
Rating: 4 stars
Source: eARC from Edelweiss

Heiress. Debutant. Murderer. A new generation of heroines has arrived.

Lady Aileana Kameron, the only daughter of the Marquess of Douglas, was destined for a life carefully planned around Edinburgh’s social events – right up until a faery killed her mother.

Now it’s the 1844 winter season and Aileana slaughters faeries in secret, in between the endless round of parties, tea and balls. Armed with modified percussion pistols and explosives, she sheds her aristocratic facade every night to go hunting. She’s determined to track down the faery who murdered her mother, and to destroy any who prey on humans in the city’s many dark alleyways.

But the balance between high society and her private war is a delicate one, and as the fae infiltrate the ballroom and Aileana’s father returns home, she has decisions to make. How much is she willing to lose – and just how far will Aileana go for revenge?

Another historical fantasy novel! I just read and reviewed Chantress Alchemy by Amy Butler Greenfield, which is historical fantasy (it takes place in England, but around the same time as this novel, I believe). I really enjoyed that book, and I really enjoyed this book! I can definitely see why this book is so wildly popular in the UK and other countries overseas - it really does have a sense of magic and uniqueness to it. It will be one of my favorite YA historical fiction novels of 2014!

Aileana is a Falconer, born with abilities that enable her to fight and kill faeries - yes, they do exist in the 1800s in Scotland. But she must also play the part of a dutiful daughter and heiress, a proper lady, a debutante searching for the proper husband, and so on. It's not easy keeping your reputation intact when you're tasked with killing faeries (so they don't suck out the energy of humans). And there is a bigger problem - even more faeries and creatures are pouring into Edinburgh, endangering the city and its inhabitants. Aileana must find a way to stop the creatures, while trying to maintain her reputation.

There is just something about Aileana. She isn't your typical YA heroine. She can't be, I suppose, because she is a woman of historical times. She is a debutante, a warrior, a murderer, an avenger. She seeks vengeance for her dead mother, who was killed by a faery. Aileana trains with the heartless Kiaran, in order to become stronger, to avenge her mother's death. Aileana's personality, her being, her character, is very raw. She is driven, motivated, tunnel-visioned, hell-bent on revenge. I don't know how to describe her other than that - and raw. Raw comes to mind when I think of Aileana.

I really like Aileana. It's not enough to say that she kicks some serious butt. She is, overall, a strong and fearless fighter, one who values her revenge, but also cares very much about the welfare of other humans. She risks her reputation and societal status many times, in order to hunt faeries that want to prey on humans.

This actually brings me to another point that I really liked - the author did an excellent job of mixing historical fiction with fantasy elements. I love how May combines the two. For example, a faery attacks a human during a ball, one that was important for Aileana's social status, and for "her" quest for a husband. As with most eligible girls in the nineteenth century (especially the heiresses), Aileana must find an eligible suitor to marry, per her father's request.

I guess I should talk about the romance... well, Aileana's heart clearly belongs to one person, and one person only. I'm not going to say who that is (although I'm sure the world knows about the romance by now), but I will say that I LOVE the romance in this book. It is subtle, and if you know nothing about the book (which, honestly, I didn't), then you might not see it coming. I can't wait to see how the romance develops in the next book.

The faery aspect is... interesting. I'm not a huge fan of faery-related stories in general, but I liked this one. Perhaps it is because the overall genre is historical fiction, and I like how the faery aspect is woven into the historical fiction aspect. I don't necessary like the plot of the story (involving the faeries), but I did enjoy the story. If that makes sense.

The supporting characters were so fun to read. I really liked Derrick, the faery friend of Aileana who lives in her dressing room. Catherine, a friend of Aileana, grew on me slowly - I think her role in the next books will be important. Gavin... I really like Gavin. His role will be crucial in the next books. I hope he gets what he deserves! In a good way. And Kiaran. I don't even know where to start when it comes to Kiaran. He is such a complex and intriguing character. As a powerful faery, he seems emotionless and contained, all the time. There is so much to him, and I really want to discover more!

I mentioned this above, but I actually wasn't a huge fan of the plot, in terms of the faeries. Maybe it was because I missed something obvious or important? But in general, there is seal over Edinburgh that keeps the faeries and other bad creatures out of Edinburgh. I think it was broken, or fading, or something. So Ailean must reseal the seal. But there are consequences to resealing the seal.

I just feel like this plot twist was a bit forced? I don't know how to describe my problem with this particular aspect of the structure of the story. Like, I don't really understand what unsealed the seal. Why did it become unsealed? I'm hoping that my questions will be answered in the next book or two.

4 stars. I enjoyed this historical fiction novel! I definitely cannot wait to read the second book (ahhh, 2015. So far away)!