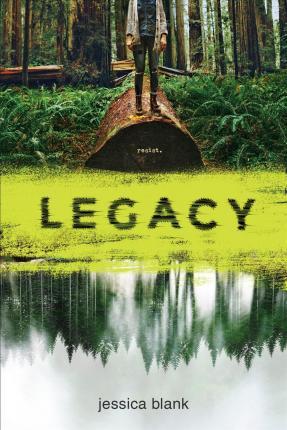 I haven't read Legacy, but I came across it on Goodreads and wasn't going to give it a second glance. But something told me to read the synopsis, despite the meh cover. I'm glad I did. This is the first YA novel that I've seen dealing directly with environmentalism - specifically, joining an environmentalist group, and most likely protesting. I've not read the book so I don't know the specifics, but I will certainly try to read it now that I know it deals heavily with environmentalism.

Today, I'm going to give brief updates on what's going on in the environmental world!

Here are some of the news:

- June 27th, 2018: U.S. Supreme Court Justice Anthony Kennedy retires. It might seem like this isn't directly related to the environment. However, Kennedy has voted liberally in many recent environmental cases, such as Massachusetts v. Environmental Protection Agency, which dealt with regulating greenhouse gases under the Clean Air Act. With the justice retiring, the president could appoint a much more conservative justice who will not favor environmental regulations.

- July 5th, 2018: U.S. EPA chief Scott Pruitt resigns. There has been a lot of scandal and controversy surrounding Pruitt, and he finally resigned, citing that the attacks were taking a toll on him and his family. Pruitt has done much harm to environmental regulations so I'm not sad to see him go.

- July 1st, 2018: the Canadian government is backing a pipeline expansion project that will have extreme negative effects on the environment, and would run through native lands. The Kinder Morgan Trans Mountain Pipeline would go through the lands of the First Nations people like the Inuit and Métis, and there has been no consensus among the First Nations as to wanting the pipeline expansion or not. But the pipeline expansion itself has major issues. The pipeline would transfer tar sands, which contains bitumen, which would be refined to make gasoline. But this process of making gasoline about 15% more carbon dioxide than the process of generating conventional oil.

- June 28th, 2018. The U.S. Senate passed the Farm Bill. This is a slightly different version of the Farm Bill that passed in the House. The House's version included amendments that would open Alaska's national forests to drilling/mining/logging; undermine the Endangered Species Act; phase out the Conservation Stewardship Program. The Conservation Stewardship Program is important because it gives farmers incentives to address water quality, soil health, etc. The Senate's version of the Farm Bill does not include the aforementioned provisions, which is good. The Farm Bill in general has some issues, but it's good that many of the anti-environmental amendments of the House's version of the bill did not make it onto the Senate's version.

- June 20th, 2018: In Indonesia, a proposed gold mine could have disastrous impacts on the environment. The proposed mine is over 90 square miles in area, and would be located almost entirely in Cenderawasih Bay National Park, and borders the Wondiwoi Mountains Nature Reserve. Both the Park and the Reserve are protected areas. The proposed mine is also bordering lands of three indigenous groups. Mining, no matter what is being mined, always leads to pollution, like groundwater contamination. There is no avoiding serious environmental impacts.

I tried really hard to find some good environmental news! I'm sure there are small victories out there, I just couldn't find any. We need more people fighting the good fight, for the environment. I hope Legacy gets more exposure in the YA world because it sounds like an important book. I'm sad that I hadn't heard of it until its publication week, but it's never too late to look into the book. And of course, it's never too late to support the environment!
Posted by Alyssa at 12:00 AM