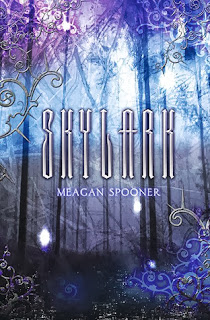 Her world ends at the edge of the vast domed barrier of energy enclosing all that’s left of humanity. For two hundred years the city has sustained this barrier by harvesting its children's innate magical energy when they reach adolescence. When it’s Lark’s turn to be harvested, she finds herself trapped in a nightmarish web of experiments and learns she is something out of legend itself: a Renewable, able to regenerate her own power after it’s been stripped.

Forced to flee the only home she knows to avoid life as a human battery, Lark must fight her way through the terrible wilderness beyond the edge of the world. With the city’s clockwork creations close on her heels and a strange wild boy stalking her in the countryside, she must move quickly if she is to have any hope of survival. She’s heard the stories that somewhere to the west are others like her, hidden in secret—but can she stay alive long enough to find them?

Overall, I feel like I enjoyed this book. This book came highly recommended to me over a year ago, with it's paranormal dystopian premise, hint of romance, and gorgeous cover. I found that while this book has all of those things, I didn't love the story. There were a lot of things that I liked about the story, but I didn't love it.

Lark has always felt a bit left out in her society - she has been harvested, like all the other children her age. But, one year, the current year, it is her turn yet again to be harvested, and she does it - she gets harvested. But it isn't what she seems. She is harvested to be a like a Renewable - as the summary says, a human battery.

I'm confused about the harvesting thing, and the Renewable thing, but I kept reading the book, despite my confusion. As I was reading, I noticed that I didn't really connect with Lark, unfortunately. She's definitely not the brightest Young Adult heroine, and while I understand why her survival instincts are razor sharp, I still think that she has a little more brain space than what she uses.

But anyway. The book is broken up into several parts. One, Lark is in her city, and she has been harvested. She finds herself in a hospital-like environment, and she cannot remember much of what happens to her while in this place. She finds herself exhausted and weak, brainwashed and in constant pain. This part of the book, to me, was extremely boring. It just went on and on and there was no point in reading it, because we know that Lark will get out of there.

The next part takes place out of the city. Here, she must learn to survive and not get killed, and not get recaptured by her city's officials, who are looking for her. Lark makes some discoveries while outside her city. She basically doesn't know nature. She has never seen the sky. Also, there are pockets are magic everywhere. I didn't understand that part, either, with the magic, but I'm rolling with it.

The last part takes place in the Iron Wood. I'm not going to say much on this part, because the climax occurs in this part of the book. I actually cannot remember much, specifically, which is bad, because that means the author didn't do a good enough job of wow-ing me with the plot.

There is a kind-of love triangle in this book. To be honest, I have no idea what Ms. Spooner is doing with the romance. By the end of the book, Lark is confused, and I am confused, in terms of the romance.

I enjoyed this book, but the plot, climax, and ending confused me, so I really can't say much about those things. The ending isn't super jolly, but it isn't morbid either. I'll be reading the second book to find out more about Lark and her abilities! Hopefully the second book will clear up things for me.

I think my biggest problem with this book is that I was confused a lot, while reading the book. I read this book back in August, when I was still home (I hadn't moved into college yet), so I wasn't rushed into reading this one, and I took my time. That didn't help me understand this book any more than if I had rushed through it. I feel like Ms. Spooner did an excellent job of building the world and characters of this book, but not a great job explaining situation after situation. I still don't quite understand Lark's former society, or the Iron Wood. I don't really understand what Lark is, or what she thinks she is. I don't really understand the role of Oren, or the other boy (whose name I cannot remember at all). Each character has a specific role to play in the book, and maybe I'm just not seeing them, or maybe as readers, we aren't supposed to yet, but I feel like some characters weren't necessary, or didn't seem important.

For example, the people from Lark's city? They're portrayed as villains, but I don't understand why they're so preoccupied with Lark escaping. They make her seem like she is soooo important, and then they make her feel like she is worthless. Towards the end, I feel like Ms. Spooner tried to explain why Lark is so crucial to the story and to the world, but I still don't get it (or just don't remember why). You know it's not so good, when you can't remember why the protagonist is "the chosen one".

Also, I feel like the non-existent romance, which total exists, but I'm calling it non-existent, was kind of strange and totally unnecessary. We have Oren, on the one hand, who helps Lark unconditionally. He's a bit prickly, and he has his reasons to be that way, but I believe he is genuinely a good person and a nice character. But by the end of the book, Lark isn't sure what she wants from him. Like, I feel like if it were me, the decision would be easy. Lark is too indecisive. But then, she's also a bit younger than most Young Adult heroines. Not that she isn't a young adult.

The pockets of magic, the Renewables, harvesting, the Iron Wood... I'm so lost in all of that. I wish I could explain why I'm confused, but I don't even know that much.

I'm definitely going to read book two, since the publisher sent me a copy, but by the end of book one (this book), I felt a bit let down. I had such high hopes for this book, and I feel like I just ended up being more confused than anything else. I'm not sure how to feel about this book, which is why I'm sticking with three stars, and not lower or higher.

Eh. This book was worth the read for me, but I'm not going to go to the streets telling random people that they MUST READ this book. It's not a must-read, but I feel like it's one of those books that you might read by chance, enjoy, and never read again. Not to say that I didn't like this book overall (because I did), but I probably wouldn't find myself re-reading it, unfortunately. Reading the next books? More likely.

3 stars. I'm definitely going to read the second book in this series, since I have had it for a few months now. I am excited to see how Ms. Spooner will turn the story into a series. Hopefully, I'll love the subsequent books even more than I liked this one!