Blog Tour Review and Giveaway: The Princess in the Opal Mask by Jenny Lundquist 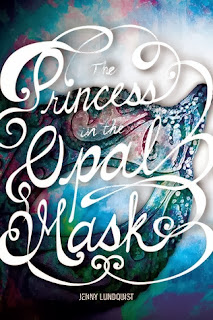 One Legend Determines the Fate of Two Lives

In the faraway village of Tulan, sixteen-year-old Elara has spent her entire life as a servant, trying to track down her real name. The name she was given before being orphaned. Meanwhile, in the kingdom of Galandria, Princess Wilhamina does not know why her father, the king, makes her wear a mask. Or why she is forbidden to ever show her face.

When a new peace treaty between Galandria and Kyrenica is threatened, Elara and Wilha are brought face to face. Told in alternating perspectives, this intricate fairytale pulls both girls toward secrets that have been locked away behind castle doors, while the fate of two opposing kingdoms rests squarely on their untrained shoulders.

Oh, how I enjoyed this book! I hoped I would, because I like "high"/"epic" fantasy novels - it's one of my favorite genres. My expectations for this book weren't particularly high, but it was still really nice to be surprised. I'm so glad I got the chance to read this book! And to be on the tour.

This book is written in split point of views. Elara is the first of the two girls to be introduced, and then Wilha. Elara is a poor girl who lives on the mercy of a cruel woman and her family. The woman's husband is a drunk and a pushover - he lets his wife walk all over him. The woman is rude and disgusting and horrible to Elara, and only lets her live with them because of the money that the orphanage gives them, to take care of Elara.

The daughter, Serena, is the worst, in my opinion. She is snobby and selfish, and while she acts like she cares about Elara's welfare, she totally doesn't. Not to mention that she spirited away Elara's one best friend (Cordon), and the two of them (Cordon and Serena) decide to get married, when Cordon promised to marry Elara.

Yes, it might have been when they were children, but a promise is a promise, no matter what. In my culture, if you say you're going to do something, you had better do it, no excuses.

But anyway. The beginning was slow, because it was all about introducing Elara's life, and then introducing Wilha's life. Wilha is a bit spoiled, even though she suffers because she constantly has to wear a mask. Everyone thinks that she is cursed. But Wilha is such a puppet. She does whatever her family wants her to do, and doesn't fight back. She doesn't use her power, or fight for what she wants. Yet she is selfish, because she wouldn't have it any other way.

So, that's part one, and how I feel about part one. Part two deals with the two girls going to the land of Wilha's future husband. I'm not going to say more specifically, but I think you can guess the relationship between Wilha and Elara, and why they are both going to the kingdom. I knew right from reading the synopsis, who they were to each other.

The plot is AWESOME. It's very unique, considering most "high"/"epic" fantasy plots. It's focused around the mystery of the mask, of the two girls, and an impending war. In most fantasy novels, a war is a huge part of the overall plot of the series. I think we'll see more of that in book two.

Elara is my favorite of the two girls. She is assertive and controlled, deceptive yet soft. She and her new love interest (take that, Cordon) are the CUTEST. I really hope everything works out for the two of them, because I LOVE the two of them together.

I feel like Wilha was a terrible character - I just didn't like her. I could totally see things from her perspective, but that doesn't mean that I have to like her. See more about Wilha and her character development in the next section.

Love triangles... not really. I could see there being one in the future for Wilha, but I could care less. I really hope that Elara and her love interest stay together. KEEP THEM TOGETHER, MS. LUNDQUIST!

I liked this book.

I thought that the first part of the book was a bit slow. I'm good with slow - I can deal with it - but it still bothers me, when I'm trying to figure out what exactly is going on, and what should be happening. We're introduced to Elara's life first, and then Wilha's life.

In all honesty, the way the author constructed the story - with Elara being introduced first, and Elara being the poor girl, I sort of disliked Wilha. She is definitely too spoiled and puppet-like, beginning and end. In my opinion, her character development is extremely. Even at the end, she is selfish. She tries to tell herself that her entire life, she hasn't been selfish, but, um, she totally has been selfish.

I just don't like her. Elara and I are much more compatible - she's got more verve and spunk and a tiny bit of a temper, I suppose. But it's okay - I can live with Wilha in the story.

I most certainly would! I haven't read too many fantasy novels this year - "high"/"epic" fantasy - but this one is a great read! I was totally drawn in by the interesting situation with the masks, the two girls situation, and so on. I didn't think I would like this one as much as I did, but, I did!

4 stars. An excellent Young Adult fantasy read! I'm so glad I got a chance to read it. Even if you aren't a fan of fantasy, DEFINITELY check out this book! It's a refreshing and intriguing start to a spellbinding series! 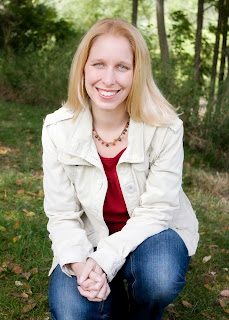 Jenny Lundquist was born and raised in Huntington Beach, CA. She earned a Bachelor of Arts degree in Intercultural Studies with a minor in TESOL at Biola University. Lundquist has published two middle-grade books, Seeing Cinderella and Plastic Polly. She lives in Rancho Cordova, California with her husband and two sons. Visit her online at jennylundquist.com and Twitter @Jenny_Lundquist.

Jenny is giving away 15 copies of The Princess in the Opal Mask! Enter to win by entering the Rafflecopter below.