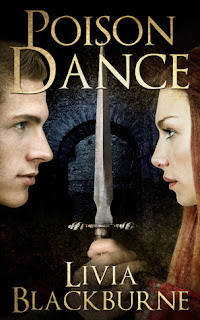 You all KNOW how badly I want to read Midnight Thief, right? That's Livia's official debut, to be published by Disney-Hyperion, in early July. I've been *aching* for that book since like, May (no seriously - check my "About Me" page). So, when Livia mentioned that she would self-publishing a novella related to Midnight Thief, you know I was all over that!

James is one of the characters that we will see in Midnight Thief, and if I'm not mistaken, he plays a pretty significant role. Maybe not as a protagonist, but as a secondary character with an important role in the plot. This novella is about him, and a young woman that he meets - Thalia.

Thalia knows something that James wants to know - about the Guild, assassinations, his former leader... somehow, she knows more than she leads on. James and Thalia work together, and form an agreement. Thalia will give James information, if James uses his assassination skills to kill someone for Thalia.

Both characters are so complex! You wouldn't think that a novella could convey so much about two characters, in such a short length, but Livia does this brilliantly! James is torn between duty and love, and Thalia... she's just broken. A difficult past filled with loss and death, a miserable future filled with pigs for men and slobs for employers - Thalia is so complicated. Her need for James to kill the person is twisted and tragic.

I admire Thalia's bravery and courage. Thalia is headstrong and independent, but she is also very clever and strategic. She knows when to act demure, and when to show her claws. In this regard, she and James are very well matched. James is extremely observant, strong, and analytically minded.

The progression of their relationship is slow and beautiful. I love how Livia times everything perfectly. The relationship grows - it doesn't feel rushed and insta-love-y, or dragged out and boring. James and Thalia are a great couple! And there is no love triangle - thank goodness!

The plot of this novella is actually rather complex, instead of a straightforward one, which most novellas feature. So many things are going on - with James, the Guild, Thalia, her mark, her training, the trade business... Livia weaves a complex world into a short space, and somehow, manages to capture the world in a simple and intricate manner.

The ending. The ending is bittersweet. I totally saw the ending coming - it's the way the story is set up. From the beginning, I knew for sure that one thing would happen, and it did. The thing is, as bittersweet as that event is, this novella really couldn't end any other way. Read this book, and you'll know what I mean!

There wasn't much that I didn't like - maybe that I NEED Midnight Thief even more than before?! Yes. That.

Totally! As with most novellas, it's not necessary to read this novella before or after reading Midnight Thief (not that I would currently know about AFTER). But we get some great insight on James (and Thalia), so why not? It's priced very cheaply, and totally worth your dollar!

5 stars. I can't wait to read more from this author! But you already knew that. Please give me an ARC, Disney!