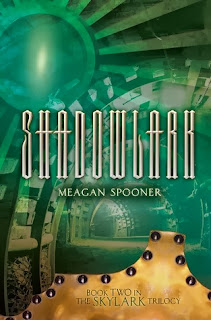 Ever since she escaped the city within the Wall, Lark Ainsley's wanted one thing: to find her brother Basil. She's always believed he would be the one to put an end to the constant fear and flight. And now, hidden underground in the chaotically magical city of Lethe, Lark feels closer to him than ever.

But Lethe is a city cowering in fear of its founder, the mysterious Prometheus, and of his private police force. To get the truth about what happened to Basil, Lark has no choice but to face Prometheus.

Facing her fears has become second nature to Lark. Facing the truth is another matter.

Lark has left the Iron Wood, in search of Basil, her brother. She knows he's out there, and she wants to find him so he can help her understand who she is and what is happening to her. The path to Basil is not easy. She and her traveling companions, Tansy (a Renewable from the Iron Wood), and Nix (her pixie from the Institute) run into many problems, and eventually, Lethe.

At Lethe, one thing becomes clear: join the resistance and take down Prometheus, Lethe's leader/dictator/savior. The thing about the resistance is that they all agree that Prometheus has done amazing things for the city, but they don't agree with one thing (of several) that he is doing: holding Renewables against their will, to power the city.

Lark is faced with so many tough situations and issues in this book. In the first book, I thought she was kind of stupid. But in this book, I could definitely see her character development. She begins to stand up for herself, her friends, and her ideas. If she has a plan, she does what she can to follow through the plan.

The weirdness with the romance is cleared up. I'm not saying everything is rainbows and sunshine for Lark and Oren, because Ms. Spooner introduces more characters, and throws them into the supposed romance angle, but you can see from mile away that those characters mean nothing in terms of the primary romance. If you read book one, and you got an idea about the romance, then you can probably see where this one is going. Nothing romantic really happens, because Ms. Spooner is subtle and crafty about the romance. It's kind of nice, actually.

The plot of this book was a tad bit predictable, possibly boring, but I enjoyed it. I could see where it was going, but I thought the execution was okay. The writing style isn't something I *really* like, because Ms. Spooner is heavy on the descriptions and nonsensical driveling paragraphs. Those are the ones I usually glossed over, because there are SO MANY, and I'm like, can I just get to the story? Not EVERYTHING needs to be perfectly described. I have a really hard time visualizing this world, actually. So, all those descriptions have the opposite effect on me.

Anyway, I will be reading book three!

Many of the problems I had with the first book, I had with the second book. For example, I was confused a lot (though this book cleared up some things), I felt like the plot was extremely slow, I'm kind of ehh about the characters, the plot was a bit predictable, and I was bored at times, and skipped over sentences (and sometimes paragraphs) at a time.

The first book had a lot of descriptive paragraphs and basically, stream of consciousness drivel that was totally not necessary. This book had a lot of that as well. I skimmed those sentences and paragraphs, because most of them time, they weren't necessary to understand the plot or the characters, or any part of the book. I mean, I skimmed over them, and I still understand the basics (and more of everything).

The things that I don't understand or am confused about seem to be the things that are explained too much. For example, Lark's powers. In the first book, they weren't explained well. In this book, we get many examples of Lark using her powers, and I still don't understand them. She sucks magic away from people? Like a succubus or something? And Basil? And Oren? How do the shadow people come about? Why do some people not have any powers (the humans)?

The plot was really predictable. Like, once Lark got to Lethe, I knew what would happen with the resistance, with Olivia, with Oren, with Prometheus, who Prometheus is... it was too formulaic. Maybe I've read too many dystopia novels, but everything was predictable to me.

This made the plot (and therefore, my reading of this book) very slow. I thought I could read this book in a few hours - nope. This one took me a while. I was bored a lot, the descriptions were killing me, and the plot was too slow. I mean, yes, there was a lot more action in this book, but it was kind of boring action. And I totally saw it coming. Predictability was high in this book! And therefore, boredom.

And the ending was a tad bit anticlimactic. I expected a bigger, more plot-moving climax, to set up for the next book, but it was kind of meh. Maybe that's just me though. I'm still going to read the third book - I've come this far!

3 stars. I think I liked this book more than I liked the first book, but somehow, they ended up with the same rating from me. I will be on the lookout for the final book of this trilogy though!