Hello all! Today I'm participating in the blog tour for Governess Gone Rogue by Laura Lee Guhrke! This is new to me, and I'm excited to share more about it. Read on for details! 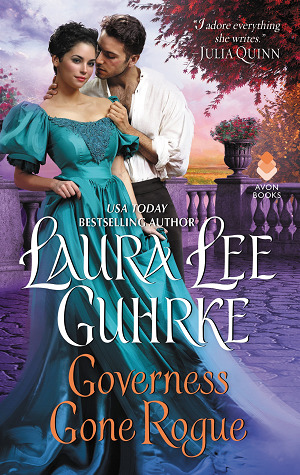 My twin brother and I need a new mother, though Papa insists he’ll never marry again. Must be nice, brainy, and fond of cats . . .

Lady Truelove may be London’s most famous advice columnist, but James St. Clair, the Earl of Kenyon, knows his wild young sons need a tutor, not a new mother. They need a man tough enough to make his hellions tow the line, and James is determined to find one.

Miss Amanda Leighton, former schoolteacher and governess, knows she has all the qualifications to be a tutor. And while female tutors are unheard of, Amanda isn’t about to lose the chance at her dream job because of pesky details like that. If Lord Kenyon insists on hiring a man, then she has only one option . . .

Jamie isn’t sure what to make of his new employee, until he realizes the shocking truth—beneath the ill-fitting suits, his boys’ tutor is a woman. An unconventional, outspoken, thoroughly intriguing woman. Despite Amanda’s deception, he can’t dismiss her when his boys are learning so much. Yet Jamie, too, is learning surprising lessons—about desire, seduction, and passionate second chances . . . 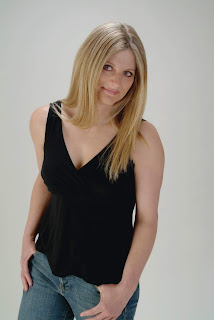 LAURA LEE GUHRKE spent seven years in advertising, had a successful catering business, and managed a construction company before she decided writing novels was more fun. A New York Times and USA Today bestselling author, Laura has penned over twenty historical romances. Her books have received many award nominations, and she is the recipient of romance fiction’s highest honor: the Romance Writers of America RITA Award. She lives in the Northwest with her husband (or, as she calls him, her very own romance hero), along with two diva cats and a Golden Retriever happy to be their slave. Laura loves hearing from readers, and you can contact her via her website: www.lauraleeguhrke.com.

Ten-year-old Owen St. Clair moved to stand alongside his brother, propped his elbows on the windowsill, and rested his chin in his hands as he watched their now-former nanny, a stern, black-clad widow named Mrs. Hornsby, step into the hansom cab at the curb below. “We’re to blame, you know.”

“Stuff.” Colin, older than his brother by exactly eighteen minutes, shook his head, a decisive move that sent the unruly strands of his carrot-red hair into further disarray. “It’s not our fault the Hornsby doesn’t like frogs.”

“Well, we did put it in her hatbox.” Owen sighed as the cab containing Mrs. Hornsby turned at the corner and vanished from view. “Three nannies in six months. I think that’s torn it, Colin. Papa said one more nanny and he’d send us to Harrow.”

At the ghastly prospect of being sent off to school, the twins turned, sliding down to sit on the floor of the library, their backs to the wall beneath the window as they contemplated what could well be their immediate future.

“We can’t let Papa send us away,” Colin said at last. “He’d be lost without us. And what would happen to Oscar?”

Both boys looked up at the gray tabby cat that was sitting on the arm of a nearby chair, a cat they’d rescued from a tree in the park two years earlier. Oscar was twitching his tail and blinking his green eyes sleepily, seeming unaware of the dire future that lay ahead for his two human friends.

“He’ll be lonely,” Owen said. “Papa’s away all the time, and the servants think he’s a nuisance because he doesn’t chase mice. They don’t like him. They might forget to feed him. They might give him away.”

“We’ve got to do something to stop it.”

“Maybe we could take him with us? It’s probably against the rules to have a cat at Harrow, but—”

“I’m not talking about Oscar.” Colin turned to his brother. “I’m talking about us and being sent away. Oscar has nothing to worry about if we can convince Papa to let us stay here.”

There was silence for a moment as both boys considered the problem.

“Maybe,” Owen said at last, “we could find our new nanny ourselves before Papa knows what’s happened. Someone we like. Someone fun. If we do that, it’s a fate . . . fate—what’s the word?”

“That’s it.” Owen’s nod was decisive. “And if we’ve already found someone, Papa can’t be too angry about Nanny Hornsby leaving, can he?”

“Maybe not, but the thing is . . .” Colin paused, his freckled face scrunching up with distaste, as if he’d just eaten a persimmon. “We don’t really want another nanny, do we?”

“No, but what other choice have we got?”

“Maybe we should find what we really want.”

“You mean . . .” Owen stared at his brother, his expression one of both excitement and doubt. “You don’t mean a new mum?”

“Why not? We’ve been talking about it for ages.”

“Another nanny would be tiresome. School would be worse.”

“What if he picks someone who doesn’t like us?”

“We’d be off to Harrow like a shot. But still—”

“If we find Papa someone who likes us, she could convince him to let us give school a miss altogether.”

“Possibly,” Owen said, his voice making it clear he wasn’t optimistic about such a plan’s chances of success. “But Papa won’t ever marry again. He’s said so a thousands of times.”

“We’ll have to find him a girl who’s smashing enough to make him change his mind. Someone pretty, of course.”

“Someone nice. Someone who won’t put pomade in our hair and lecture us when our trousers get torn.”

Colin nodded. “She’ll have to be brainy, too, like Mama was. And fond of cats.”

Oscar meowed, as if giving his endorsement of this plan.

“That is the sticky wicket.”

“We could put an ad in Auntie Clara’s paper,” Owen said after a moment.
“Men are always advertising for wives in the papers.”

“Gentlemen don’t, and Papa’s a gentleman. Wait—I know!” Colin jumped to his feet and crossed the library to the writing desk. As his brother watched, he opened the center drawer, retrieved a sheet of notepaper, and closed the drawer again.

“What are you doing?” Owen asked curiously, standing up and moving toward the desk as his brother reached for the pen that was reposing in a silver holder on the inkstand.

“Who are you writing to?”

“Who does everyone write to when they want to solve a problem?” Colin countered as he inked the nib of the pen. “I’m writing to Lady Truelove.”

Those who wanted to be polite would have deemed Amanda Leighton a woman of the world. Those not so inclined to civility would have called her
something else, something much less romantic.

Either way, facts were facts, and though by the age of twenty-eight Amanda
had lived in two different countries, earned a university education, found a profession, taken a lover, and lost her reputation, she had not gained the one experience society deemed worthwhile for those of her sex. Amanda had never managed to acquire a husband. But then, she’d never really been in search of one. Her mother had died when she was a young girl, and she’d been raised by her father, a university professor who had scorned the traditional, marriage-minded, downright silly scope of a girl’s learning, and who had personally given Amanda a first-class education worthy of any boy. More important, he’d taught her to take charge of her own destiny, not by the use of feminine wiles, but by the employment of her intelligence.