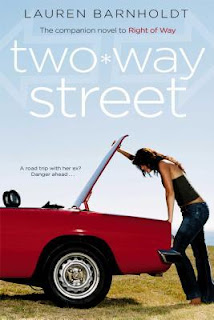 There are two sides to every breakup.

This is Jordan and Courtney, totally in love. Sure, they were an unlikely high school couple. But they clicked; it worked. They're even going to the same college, and driving cross-country together for orientation.
Then Jordan dumps Courtney -- for a girl he met on the Internet.

It's too late to change plans, so the road trip is on. Courtney's heartbroken, but figures she can tough it out for a few days. La la la -- this is Courtney pretending not to care.

But in a strange twist, Jordan cares. A lot.

Turns out, he's got a secret or two that he's not telling Courtney. And it has everything to do with why they broke up, why they can't get back together, and how, in spite of it all, this couple is destined for each other.

This was an impulse buy from BookOutlet - the book was $0.59 so how could I not? I absolutely adored Barnholdt's Through to You, and I figured it couldn't hurt to give this book a chance. Plus one of my blogging friends absolutely loves this book. Believe it or not, I actually really enjoyed this book. I know my rating does not quite show this, but I found this book to be really well-written. What I found myself disappointed in was the ending, in that it didn't feel like an ending. There needed to have been an epilogue. But I'll talk about this more later on!

Jordan and Courtney had been together for four months, when Jordan breaks up with Courtney. He tells her that he doesn't want to be in a relationship anymore, and that there is this new girl he met on Myspace (I know, right?!). Courtney is devastated. To make matters worse, Jordan and Courtney were going to move in to college together, and they had a three-day roadtrip planned. They're still going to go on the roadtrip, but Courtney is pissed, and Jordan, well, Jordan isn't telling her everything. Some people aren't meant to be together - but some people really are, that's what this story is all about.

This story is written in dual POV and dual timeline, which I thought was neat. Usually I don't really care for the whole flashbacks thing but it really worked in this story. So we get to see chapters from Courtney's POV, and chapters from Jordan's POV, and each of them have chapters that are in the "before", "the trip", and "after". The "before" starts with Jordan and Courtney meeting at a party and takes us all the way up to Jordan breaking up with her. "The trip" is exactly what you'd expect - present time, in which Courtney is angry about having to still go on the roadtrip with Jordan, but she still goes, and it doesn't quite go as planned. The "after" is pretty much when they get to the college, and she finds out about ~things~ around that time. Like I said, usually I don't like dual timelines, flipping between past and present, but it worked in this story.

Courtney is someone I really related to and understood. She is very analytical and Type A, a planner and an overthinker to the max. She likes things planned to the finest detail, and when she has a plan and a schedule, she likes to stick to it exactly. She likes to know exactly what is going on with no grey areas. I am very much like this so I understood her and I liked her. For much of this book, she is not happy with Jordan, and rightfully so. But she also misses him, and rightfully so.

Jordan is the golden boy player type, the good-looking one that all the girls love, the one that is confident and charming, but also sweet and sensitive when he wants to be. He runs from his problems, which is part of the reason why he and Courtney started hanging out (it's complicated), and he ended up realizing that he genuinely liked her and wanted to be with her. Jordan is a more complex guy than meets the eye, and I liked him a lot. He isn't sleazy and a d-bag like you'd think. He's a decent guy; I know his type and I like him.

I expected more drama in the story, what with Jordan having a new girl he met on Myspace and all that. But surprisingly, the drama wasn't that bad? I hate drama and I expected a ton of it, but the drama was really all between Jordan and Courtney and not really including other people. Jordan misses Courtney but can't talk to her about ~things~. Courtney misses Jordan but she is furious about the breakup. Things are complicated between them.

Nevertheless, I could really feel the bond between them, and their feelings for each other. The romance in this book is messy because they're broken up, but it's still a really sweet romance. I loved seeing them pretend like they were okay, like they both weren't hurting, like they both didn't want to grab the other and kiss. It was good angst!

This book was published in 2007, and I was twelve years old at the time... apparently Myspace was still a thing back then? This book centers a lot around Myspace - Jordan's mysterious "Myspace girl". I actually learned a lot about Myspace from this book. But honestly, even though this book dates itself, you could replace "Myspace" with "Snapchat" or "Instagram" or something, and replace mentions of CDs with Pandora or playlists or something, and this book would be entirely applicable to teens today. In fact, all of Jordan's and Courtney's mannerisms, speech, etc. are all totally applicable to teen culture today. I mean, it was only ten years ago, but still. *I* never had a Myspace profile, so this book is a little on the old side! But still very much relatable.

I'll wrap this up. While I did not love the ending (see below), I liked it for the reason that it was a HEA. I love HEAs, and this ending wasn't a disappointing or heartbreaking ending. I'm glad Courtney finally learned the truth and she and Jordan had a conversation about everything. Drama sorts itself out. Barnholdt wrote a pretty great roadtrip romance. But I wasn't totally satisfied.

There really needed to be an epilogue to this book. The ending is so abrupt and left so many loose ends. With Courtney being such a meticulous planner and organizer, I expected her to be fixing things left and right. I'm trying to be vague on purpose. I just felt like there was a conversation, and that was it - the book ended. Can we see a cute scene with Jordan and Courtney, four months later during Christmas vacation? Or something? I just wanted more assurance that things are working out. This is my biggest complaint and it's pretty much the reason why this book isn't getting four or more stars from me.

Also, I wanted more kissing! There is some kissing in the "before" chapters, but I wanted present-day kissing. Second-chance angsty romances make for some serious chemistry and passion, y'all. There should have been some intense makeout sessions! *complains*

3 stars. I liked this book but really wanted an epilogue or more chapters in the story. However, I hear that Right of Way is a companion novel that includes some Jordan/Courtney cameos... so I guess I have to read that book now. I hope I won't be disappointed!