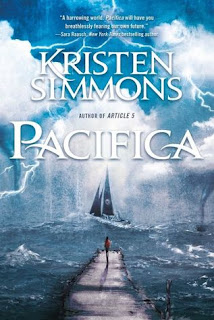 I expected to enjoy this book, because I've read all except one of Simmons' books, and I've loved all of them. (I reaaaaaally need to read Three. Why am I so bad at finishing series.) I really trust Simmons and I honestly didn't even read the synopsis very closely, because I knew I had to have this book. Here's the thing: not only did I enjoy Pacifica, but I loved it. I fell into this story and I didn't want to stop reading until I was finished, which is exactly what happened. There are so many things about this book that absolutely worked for me, and I hope I can convince others to give this thought-provoking a novel a chance.

This is the story of Marin, a corsario living on mainland, struggling to feed herself and live a semblance of a good life. It is also the story of Ross, the president's son who has everything at his fingertips. Everything, that is, until one bad decision costs him, and he finds himself caught up in the madness of Pacifica. What exactly is Pacifica - is it the green paradise in the middle of a clear blue ocean that the government wants everyone to believe? Why is the government "choosing" five hundred Shorelings to go? What's really out there? Marin and Ross meet in uncertain circumstances but must work together to stay alive, and discover the truth about Pacifica.

This book is told from third-person dual POV, with each chapter being told by either Marin or Ross. Their mutual story converges fairly quickly and they meet when Ross and his friend Adam decide to leave the fancy government party celebrating Pacifica and the pending lottery to go out and watch the riots. Marin isn't trying to be in the riots, but she needs to make a deal with someone, and that someone is where the riots are. The riots throw Marin, Ross, and Adam together, but only Marin and Ross make it out. Ross is determined to find Adam no matter the cost, and Marin knows that Adam is going to be taken to Pacifica. This is how Marin and Ross find themselves in a predicament - find Pacifica, find Adam. Marin needs the money, Ross needs his friend back... but they both get much more danger and shocking discoveries than they expected.

Once Marin and Ross set out to find Adam, I was completely hooked. I mean, I was hooked before then, but I was totally dialed in and anxious to read more, by the time Marin and Ross take to the seas. By then you must know that Pacifica isn't what it is made out to be, the government isn't being truthful, and the Shorelings are being taken somewhere to die - or worse. So many secrets! So much danger. This story was rife with high stakes, and an all-or-nothing type of adventure.

I really felt for Marin, who is such a strong and capable young lady trying to live in emptiness and nothings. She isn't a Shoreling - she was born a corsario (pirate) - but she is just as trapped as the other Shorelings scraping by to eat and survive. Marin was brought up to be tough and a survivor, but she has a soft heart underneath the thorns. There is a lot of complexity and grey area when it comes to Marin, and my heart broke for her throughout the story.

Despite Ross living a lavish, pampered life as the president's son, I connected with and liked him from the start. He is so noble and loyal, which we get to see over and over in the book. He listens and observes and has an open mind. He has a soft heart, like Marin. Ross is a paradox, but aren't we all?

The world of this story is a brutal world, a world set in the somewhat far future, but a world that is quite possible and could very well happen. There is very little clean water in this world, and absolutely no ice/icebergs/polar icecaps. There is little food, little shelter, little oil, little of everything. The world is in ruin, for many reasons, and there are few options for many people. This is how Pacifica came into works by politicians. You'll have to read more to find out what Pacifica really is...

Another thing I appreciated (though it made me so sad) was how much the story of Pacifica reminded me of some good old US history. Doesn't it sound familiar? Sending five hundred of X type of people to what is basically a prison, telling them it's for their own good and safety, that they'll be able to have a better life there? This happened not too long ago, in US history. I was thinking about this as I was reading the book, and how familiar the idea seemed, and how there was conflict on both sides of everything, and way too many innocent people that deserved better. Read the author's note at the end of the book when you get a chance. After reading the book, I read the author's note, and my heart broke. The author knew exactly what she was doing, and what type of story she was telling, and this... this made me appreciate the story even more. Props to you, Kristen Simmons. Pacifica is so important from an environmental point-of-view, but just as much or maybe even more so from a historical and social and political point-of-view.

The author clearly did her research, not just on the environmental issues, or when it came to the mechanics of sailing a ship. She really captured history in this book, without writing a historical fiction novel.

I adored was the romance, as subtle and slow-burning as it was. There is no love triangle (and I only make this statement because yes, while Adam might be considered a very important secondary character, he isn't a love interest or anything like that. Not even close.). There is no insta-love between Ross and Marin, but rather a slow building of feelings and closeness. I loved their relationship, from perfect strangers on the the extremes of the societal totem pole, to two people who need to trust each other and depend on each other to survive. Like I said, the romance is very slow-burn and not something I was really thinking about as the story was progressing, but it was something that crept up on me and I appreciated the subtlety. Yes, there is kissing in this book!

The ending of this book is very hopeful, from all standpoints. Nothing is perfect and riding off into the sunset, but many political decisions were made about this and that, and so we know change has been happening. And on the romantic side of things, the ending is really sweet.

I could probably gush about this book some more. I loved the story and I would reread it again in a heartbeat (and I think I will!). It's not a fluffy, fun story to read - it's an intense, sometimes dark story that sheds some light into the potential future of the world. It's honestly not so far off. This story is so important and I hope many people read it, especially teenagers, who are our future.

I really can't think of anything so I'll be skipping this section!

I really recommend this book. Yes, I'm an environmental engineer and former environmental engineering student and I'm super excited about a post-apocalyptic/dystopia novel focusing so heavily on the future of the environment and consequences and climate change. But I also loved the story of Ross and Marin, two people coming from very different backgrounds to change everything. I loved the message of the story and how it reflected on a dark time in US history. I can't recommend this book enough; it is fiction, but it is also reality.

5 stars. Pacifica is a thought-provoking, moving novel that exposes a future that could very well be reality for the world. This book should be in classrooms, among students and teachers. Fiction is great for escape, but it can teach us so much. I am never disappointed by Simmons and I'm glad Pacifica was such a hit for me. I hope many readers share the same sentiment!