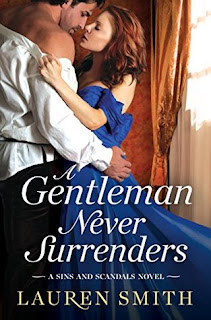 Love is worth a little scandal.

Owen Hadley needs a wife. Preferably a wealthy one. Alas, there aren't a great number of heiresses willing to marry a rogue of no particular fortune---luckily, if there is ever a gentleman capable of melting a lady's chilly heart, it's Owen.

Milly has had enough of the marriage mart. If matrimony means giving up her freedom for a foppish husband, then society can take their idea of marital bliss and toss it. But when the ton's most notorious rogue mistakenly makes his way into her bedchambers, Milly finds herself unexpectedly and unwillingly at the altar . . .

Yet the more time she spends with her new husband, the more Milly starts to wonder if the marriage she never wanted may be the best thing that's ever happened to her. Now it's up to Owen to convince Milly that what started as a mistake is anything but---and that every night with him will be more wonderfully scandalous than the last.

I requested this book from NetGalley on a whim. I'd not read the first book, but I saw it on Twitter when the publisher tweeted a picture of the cover. The cover of book one is so delightful and I had a little fun with making up what I thought the characters were thinking about. It's a great cover! When I saw that a new book by Smith was on NetGalley, I decided to give it a try. I love the marriage of convenience trope (or inconvenience, in this case), so I had a feeling that this book would be for me. And it was!

Owen Hadley is a fortune seeker - but he's not as bad as everyone thinks. Sure, he is looking to compromise and marry a rich heiress as soon as possible. But his reasons are honorable. His methods... maybe not. He sets out to seduce the younger Pepperwirth sister, Rowena, but accidentally winds up in the older sister's room. He and Milly are forced to marry, much to the their mutual chagrin. Milly wanted to marry for love, and she certainly never wanted to marry a man of such a reputation. But as they begin to build a life together, they realize that marriage isn't so bad, and neither is falling in love.

This is a short book - probably around 150 pages - but it is a complete story. Owen and Milly get married early in the story due to being caught in a compromising situation, something neither of them wanted. They don't like each other and would rather never speak again, but marriage is the only choice. The rest of the novel focuses on their marriage, on the way to Owen's home and life on his lands.

Owen has a reputation of being a merciless fortune seeker, trying to poach a rich heiress by any means possible. He has left a trail of women behind him, as the rumors would say. But is he so bad? The answer is no. While I can't say I loved his methods of trying to get married (i.e. trying to seduce heiresses), I understand why he was so determined. With his lands and estates having deteriorated while he was at war, he desperately needs the money to puts things in repair. Since he isn't nobility, the only way he can get a large amount of money quickly is by marrying an heiress with a large dowry. Owen is actually a very selfless guy, contrary to what he might seem. He cared only about his estates, lands, tenants, and his staff. When his friend needed him, he left immediately to take care of him. Owen deserved better than his awful reputation. I really liked him and was rooting for him!

Milly seems like a cold and uninterested young woman to every potential suitor, even Owen, who is desperate enough to marry anyone. Owen doesn't even consider Milly because of her external nature (instead he wants to seduce Rowena). Milly is actually a complete sweetheart, and she guards her heart because she doesn't want to marry like a business transaction. She wants to fall in love with the man, and she wants her freedom. Marriage seems like a prison to her and she doesn't want that. Especially when she is forced to marry Owen, someone she warned her sister about. Milly is prickly and opinionated, and she is a great match for Owen.

I liked these two together so much. Owen is charming and a little wicked, and Milly is strong-willed and sweet. They match well. Owen does everything and anything to please Milly, not only because he knows that they are in the situation because of him, but because he wants to take care of his new wife. The way he dotes on her is so sweet. Milly is apprehensive and scared and upset at first (as she should be), but she grows to love Owen faster than he does. This may have been a short book, but the progression of the romance is so well-written. I loved watching them fall in love - it was wonderful to watch unfold. They bicker and fight a lot initially, and they have a lot of hesitation and tentativeness as newlyweds, but they grow and learn about each other and figure things out together.

This sweet romance has some hot chemistry to it! The attraction grows and grows from the first encounter. Smith cooks up the tension and the sexy times are just that. I like how the lovemaking really matched the couple - sweet, but also fiery hot and a little rough.

The conflict leading up to the climax is not bad at all and I love how the author reveals information bit by bit. There is very little drama and the ending is so good. I only wish that there had been an epilogue or something, because I really wanted a great peek into Owen and Milly's future. But this book was excellent and definitely what I needed at this time. I'll be looking out for the next book, featuring Rowena and a Scottish lord!

Like I said earlier, I wanted an epilogue! But maybe this couple will make some appearances in the third book. I want to see them as a married couple who are totally in love and comfortably moving through life together! The ending of this book seems like just the start. More please!

If you're in the mood for a short, sweet, steamy historical romance story, this is a great one. I'm sure the first book was also good and I may check it out sometime soon. I love the usual length HR novels, but this abbreviated one was pretty fantastic! It was a complete love story and it was very satisfying.

4 stars. I am excited about the third book! It'll be an especially fun book since there are different tropes in the book than in the previous two. For one, the hero is Scottish, which I love! I adore Scottish-British pairings and I can't wait to see Lord Forres and Rowena fall in love.