Review: A Conspiracy in Belgravia by Sherry Thomas 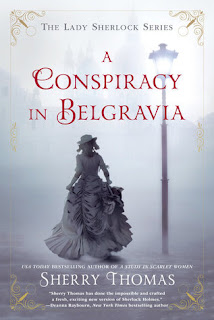 Being shunned by Society gives Charlotte Holmes the time and freedom to put her extraordinary powers of deduction to good use. As “Sherlock Holmes, consulting detective,” aided by the capable Mrs. Watson, she’s had great success helping with all manner of inquiries, but she’s not prepared for the new client who arrives at her Upper Baker Street office.

Lady Ingram, wife of Charlotte’s dear friend and benefactor, wants Sherlock Holmes to find her first love, who failed to show up at their annual rendezvous. Matters of loyalty and discretion aside, the case becomes even more personal for Charlotte as the missing man is none other than Myron Finch, her illegitimate half brother.

In the meanwhile, Charlotte wrestles with a surprising proposal of marriage, a mysterious stranger woos her sister Livia, and an unidentified body that surfaces where least expected. Charlotte’s investigative prowess is challenged as never before: Can she find her brother in time—or will he, too, end up as a nameless corpse somewhere in the belly of London?

This sequel novel was incredible, quite possibly even better than A Study in Scarlet Women. I don't read nearly enough mystery fiction novels, but I'm glad I started reading this one. Clearly Sherry Thomas can write anything, and I'd enjoy it!

In this second book, Charlotte Holmes has a new set of cases that are puzzling and strange. Lady Ingram has sent a request for Sherlock Holmes, to find her childhood love, who did not meet her at their annual rendezvous. There is something peculiar about this request, and Charlotte knows it's not just the case of a missing man - especially when Lady Ingram cites that the man is Myron Finch, Charlotte's half-brother. Throw in a dead man and some business from the previous novel, and it is clear that this is no ordinary situation. Charlotte and Mrs. Watson must find Myron Finch before any unpleasant business catches up to him - or them.

There are so many moving parts to this story, which was fantastic! Charlotte takes on several cases, and some of them intersect. The primary one is that of Lady Ingram, but there is also a woman who believes her housekeeper is trying to poison her. There is the matter of the dead man, whom Charlotte happens upon by chance, in some ways. In the end, all of these plots come together, except one. I thought it was so neat, how everything connected. As you're reading the story, you wonder about each individual case. But then as the climax draws near, it becomes obvious that many things are connected.

Thomas had me guessing about everything, right up until 98% of the book, when all is revealed. Don't get me wrong, the author drops information here and there, enough to make you think you understand what the mystery is. But the big reveal is nothing like I would have expected. I must applaud Thomas for how she set up the crime and the mystery!

Charlotte is so, so clever! I can't imagine writing such a clever character being easy! She is so perceptive and intelligent - nothing gets past her. She is so formidable when using her brain. Thomas did an amazing job of writing Charlotte.

The other characters were equally as well-developed and likable. I enjoyed reading scenes from Mrs. Watson's POV - she is a very kind and intelligent woman. Most of the book is written from Charlotte's POV, but all is from third-person, so the author had the freedom to have scenes from different characters' POVs. It was mostly Charlotte and Mrs. Watson. Mrs. Watson is a fantastic sidekick, and I liked seeing her friendship with Charlotte grow and solidify more.

Lord Ingram is a big part of this story, though he plays less of a big role as he did in the first book. His presence is always noticed, even though he is barely in the book (in terms of being in the same space as Charlotte). He is as honorable and clever as always, though of course not nearly as clever as Charlotte. He is a good man.

We also got to read from Livia's POV, and I liked that. Livia is a sweet girl, and her part of the story was fun to read. Fun, and sometimes a little wistful, but also hopeful. She has begun writing the tales of Sherlock Holmes and I think it's obvious that she loves it.

In terms of romance, there is even less of it than there was in book one, at least for Charlotte. She does get a proposal but not from who we as readers would want (that couldn't happen anyway). However, this proposal thing is dealt with by the end of the book. Fret not!

I won't say too much more, especially in terms of the mystery. Suffice it to say, Thomas has written a really good mystery that will be difficult for most readers to crack, until the end.

I would say the only thing I would complain about is the lack of romance. I understand why, but I want romance between Charlotte and her man! I think it'll be more possible in the next book, but still. The setup of the possible romance is so strange. But I guess it might move in a good direction in book three. Maybe? I don't know!

I highly recommend these books to fans of mystery novels. This is a historical fiction novel that is purely mystery-based. And if you hadn't noticed yet, it's a gender-swapped Sherlock Holmes story. It's great for adults or young adults, even though it is published under an adult imprint. I kept guessing at the mystery until the very end, which is the mark of a great mystery novel, to me!