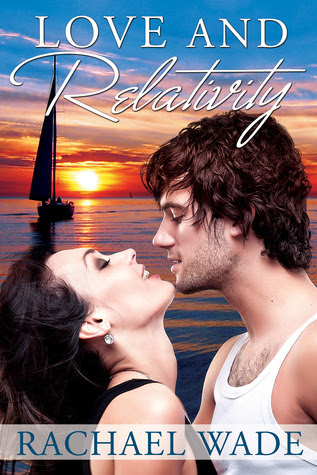 Love, life, and happily ever after? It’s all relative.

Marine biology student Emma Pierce lives in paradise—geographically speaking, anyway. Stranded on Sanibel Island, Florida, she works at a nursing home by day and spends her nights dodging the island's infamous bad boy, Jackson Taylor, at her favorite karaoke bar. Trying to heal from the loss of her sister and a failed relationship she rerouted her life for, she's ready to graduate and finally leave Florida behind.

When a run-in with Jackson and his rowdy crew goes sour at the bar one night, sparks fly and irreversible damage is done. It’s no secret that Jackson loves to get underneath her skin, but this time he's gone too far. Now all he wants is to earn her forgiveness before she's gone for good, but their ideas of closure—and the future—are enough to keep them worlds apart.

I love the tie-in between Preservation and Love and Relativity. Carter, from Preservation, is the key connector. Emma and Jackson's story is very different from Kate and Ryan's story. I believe this book is considered New Adult, and it definitely had the New Adult feel. Their relationship is not quite as serious as Kate and Ryan's, and yet there are so many complexities, just like Kate and Ryan's. I compared these two books a lot, as you can see.

As in Preservation, there is a good amount of depth in each leading character. Even the secondary characters are fleshed out. Emma and Jackson have their own problems, some worse than others, and they have to work through them in order to have a good relationship, and a foreseeable future.

The romance and relationship-building in this book was once again, pretty nicely done! Ms. Wade definitely knows how to have a relationship progress pretty well, and she knows her way around a steamy scene. But I had many problems with it though, as with Preservation.

Remember my Preservation review? No? Read it HERE. The same problems I had with Preservation, I had with Love and Relativity, and then some. The whole I-am-woman-here-me-roar and I-am-independent-don't-try-and-take-care-of-me things are RIDICULOUS.

Again. I understand wanting to be independent, a man's equal. I get it. But then there is trying to control the man, consciously or unknowningly. Emma is so wishy-washy! She wants Jackson, she doesn't want Jackson. She pushes him away, but then she expects him to give her "time", and "space", and not see or TALK TO other women.

Emma doesn't want to give up her life for Jackson (understandable), because she thinks that her dead sister would want her to go far, far away, and study. WHAT? REALLY? Are you basing your decisions on what a dead person MIGHT have thought? I'm sorry, does that person tell you what to do, alive AND dead? I mean no disrespect to the dead. But this is something that I universally hate about grieving people, and not just Rachael Wade's character. Are you really going to sit there and figure out what a dead person might have wanted for you? What do YOU want for you?

I think I hit the trust thing. I also hit the independence thing too. With Kate in Preservation, it was her trying to push Ryan away, and then keep him close, but on HER leash. With Emma? It's her trying to be in a relationship with Jackson, but then not, and then she wants him to come with her to Seattle (I believe it's Seattle) when she goes to school. She wants HIM to give up his life for HER, even telling him that he is "standing still", which basically is telling him that he should be the one to come with her, because he doesn't try and change his current lifestyle.

Ugh. If this is how ALL of Rachael Wade's heroines act, I... I don't know what to say.

Not really. In this book, as with Preservation, the romance and chemistry saves it. I definitely enjoyed some parts of the book, like the first half. But this is not the best example of "New Adult". There are more enjoyable ones out there.

2.5 stars - rounded up to 3 stars. Am I going to keep up with this series? Yes. But I am most likely not going to start reading Ms. Wade's other series, even though I have the entire set on Kindle. I have fun when Ms. Wade has freebie days! I may come back to them. Maybe not.