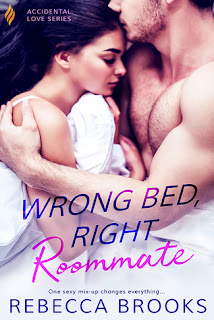 It's not every day you wake up to a stranger getting into your bed.
Only, he isn't a stranger at all, he's my best friend's hot older brother…and apparently my new roommate.
Having him in my space, driving me crazy, isn't a problem at all. Nope.
All I need to do is keep control of the situation…
But that's easier said than done.

Shawn Lassiter is the kind of distraction I don't need.
First he accidentally gets into my bed, half-naked, the night before my first day at my new job.
Hello, muscles and tattoos!
Then he's there, in nothing but a towel, making me coffee in the morning.
It's more than any girl can resist. Right?
But Shawn is off-limits, even if his eyes are saying differently.

It has been a minute since I read a book, and a longer minute since I reviewed one! I've been in a bit of a slump for months. But I decided to try and read something while on the plane to Florida, and this book got my attention. As soon as I started reading, I was pulled right in and didn't stop reading until I was finished. I finished this book in the two-hour flight to Florida and I have no regrets. This was exactly what I needed to remind myself of how much I love reading.

Jessie and her best friend Talia are roommates in NYC. Jessie recently got a new job in the publishing industry. Everything seems to be perfect - her first day is coming up - when she finds out that Talia's subletter backed out of the arrangement. Enter Talia's older brother - literally. Jessie wakes up to find him in her bed (by accident!). Talia gives Shawn her room in the apartment for the summer, which Jessie finds out the hard way. Talk about a surprise! What ensues is some undeniable chemistry, forbidden love, and a little drama that no one expected or wanted. But it's just for the summer... right?

I love forbidden romance, so that premise got me hooked right away. It's a forbidden romance because Jessie would never want to hurt her best friend in any way - like hooking up with Talia's manwhore brother. Growing up, Jessie saw exactly how Shawn operated when it came to girls; she always had a crush on him, but knew better. Years later, after finding him in her apartment, Jessie can't deny that she is very much attracted to him. And Shawn - well, he knows better to sleep with one of Talia's friends. He never really noticed Jessie when they were younger, but a grown Jessie? He can't not notice her.

Jessie is a sweetheart! She works really hard and worries a lot, so I could easily relate to her. She brings work home and tries to do above and beyond all the time, leaving little time for anything else. I felt for her! She needed someone easygoing in her life. Shawn is very easygoing and laid back, but he is also a hard worker and a creative thinker. He is trying to show everyone that he is taking life seriously and making positive changes in his life. Both of these characters have a lot of depth to them - they're relatable in many ways.

The chemistry between Shawn and Jessie is sizzling! There is some really well-written tension, and then things get really heated between them. I love the whole "we-can't" aspect - they can't deny themselves, and it's fun to watch that unfold. The sexy times are very sexy!

I also loved how Shawn and Jessie grew as adults, in this story. Both of them were dealing with brand-new jobs, fresh starts, navigating new lives. They both had to focus on their careers, and they encouraged each other along the way. It was really cool to see two young twenty-somethings struggle with adulting, but they struggled together.

There is a tiny bit of drama at the climax of the story, when Talia (inevitably) finds out about Shawn and Jessie. But it is resolved very quickly, and the happily-ever-after is perfect. I usually don't like drama in romance novels, but this drama felt minimal and almost necessary.

I loved this book! I will definitely be looking for more books in the series.

There wasn't anything specific that I can say I didn't like? Maybe more juicy scenes!

I highly recommend this book, if you're looking for steamy contemporary romance. This book took me out of a months-long reading slump. It was so light and enjoyable, but also sexy and thought-provoking. Maybe as a twenty-something who is looking for her own romance, I saw a lot of myself in this book and in Jessie. This was a great story for me!

5 stars. I'm so glad I loved this book because I was really hoping that I would! It had so many elements that I love - forbidden romance, sexy alpha (but not alpha-hole) hero, hard-working smart heroine, roommates to something more... this was fantastic. I can't wait to read more!