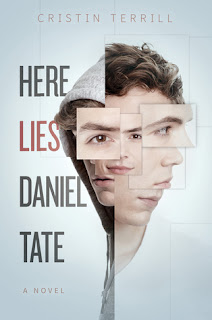 A young, street-savvy runaway looking for a place to call home realized he might have conned his way into the wrong family in this fast-paced and thrilling novel from award-winning author Cristin Terrill.

When ten-year-old Daniel Tate went missing from one of California's most elite communities, he left no trace. He simply vanished.

Six years later, when he resurfaces on a snowy street in Vancouver, he's no longer the same boy. His sandy hair is darker, the freckles are gone, and he's initially too traumatized to speak, but he's alive. His overjoyed family brings him home to a world of luxury and comfort he can barely remember. In time, they assure him, he'll recover his memories; all that matters now is they're together again.

It's perfect. A miracle. Except for one thing.

He's a petty con artist who accidentally stumbled into the scam of a lifetime, and he soon learns he's not the only one in the Tate household with something to hide. The family has as many secrets as they have millions in the bank, and one of them might be ready to kill to keep the worst one buried.

This book was trippy! It's a thriller and mystery novel, though it sort of reads as a psychological thriller (maybe it is one?). We have an unreliable narrator here, in the form of "Daniel Tate" who isn't actually Daniel Tate. I really enjoyed this book, though I want more. I couldn't believe it, when it ended!

Our protagonist, "Daniel Tate", isn't actually Daniel Tate. One day, to escape some trouble at a shelter for homeless kids, he gets into a tough spot, and he decides to impersonate a boy who has been missing for six years - Daniel Tate. This boy was ten at the time, the fourth child of a very rich family. It's the perfect scam for our protagonist, especially since he and Daniel would be around the same age, and their appearances are pretty similar. The family seems to welcome him back, though his mother and second older brother are a bit hostile. But as each day passes, he begins to realize that things are a little too perfect, and that he is in too deep to leave again. Things in this household are not as they seem, and something big is building up, waiting to explode.

Here Lies Daniel Tate is nothing like All Our Yesterdays, a book that I read and loved several years ago. The two books are so different, yet equally as strong standalone novels. It's a true mark of an author's creativity, when he/she can write across different genres, and he/she does it well.

First, can I talk about the title of this book? I love it so much. It implies death - "here lies ___" is a phrase associated with death and cemeteries and tombstones. BUT. It is perfect because our protagonist, "Danny", is not actually Danny Tate, and he is such a liar. So it's like, here (at this place) lies (not telling the truth) Daniel Tate (not Daniel Tate). I love it!

I don't know what to call the protagonist other than "Danny", because we never find out his real name. The first thirty or so pages of the book show Danny's life in Vancouver, how he is homeless and destitute, living off help from shelters and temporary homes with other homeless boys. But it doesn't last, because he gets into some trouble at one place. He does a little research and decides to impersonate Daniel Tate, at least for a little bit, until he can run again. But things get a little out of hand when the family of Daniel Tate believe him, take him in, and completely integrate him into their lives. Danny is a petty con artist by circumstance, forced to survive in any way he can, but he didn't plan for everything to go so far.

Danny is a hard character to crack. We know from the start that he isn't Daniel Tate - we get to see exactly how he "chose" Daniel Tate, but we don't really get to know much about him. He is a good actor, and a skilled liar. He looks out for himself, but as the story goes on, he finds that he can't just walk away from this family.

The family is made of four siblings (not including Daniel) and Jessica, their mother. Patrick and Lex are from Jessica's first marriage, and Nicholas, Daniel, and Mia are from her second marriage. Patrick and Lex are both in their twenties; Patrick is a lawyer and handles all of the legal work for Danny's return, and Lex is a 24-year-old on-and-off college student who is a stand-in mother for Danny, since Jessica is not interested in being anyone's mother. Mia is eight (I think?) and the cutest and most accepting sibling. Nicholas is seventeen and it's clear that he doesn't like Danny. Despite that, familial relationships are pretty important in this book (and not just in the way you think), even if Danny isn't actually related to any of these people.The family is dysfunctional at best, but Danny grows to care about each family member.

Until things take a dark turn.

I won't share too many details about the rest of the story (which is about half or more). I don't want to spoil a thing, because it is rather twisted and I was guessing wrong the whole time. I love how Terrill set things up that way! I'm impressed by how well the mystery aspect of the story was constructed. And how much I grew to like many of the characters - that was surprising, because each one of them had something to hide.

Romance takes a backseat in this book, and so it's there but not really. Danny meets a girl and they hang out from time to time. Ren is really cool and a little odd in her own way, but I like how free-spirited she is. I wish the romance had gone deeper or further, but at the same time, I like that the author didn't take it further. It makes sense, given who "Danny" is.

The ending does not disappoint, in that it is just as trippy as the whole book! Seriously, you will be just as surprised and perplexed. Read the book to find out what I mean!

No real complaints from me! This book is very different compared to my usual, and I liked it a lot!

If you're into thrillers and mystery novels, this is a good one! It's a combination of both and it will leave you questioning everything. Danny is the most unreliable narrator I've ever come across, which was amusing, rather than frustrating. Like I said above, this isn't my usual type of read, but I liked it and I wouldn't mind reading more books like this!

4 stars. I wonder what the author will come up with next! I'm still hoping for a sequel to All Our Yesterdays, but I'm actually not crying for a sequel to this book. Given the ending, I think this book works really well as a standalone. But I think I need more Terrill stories!