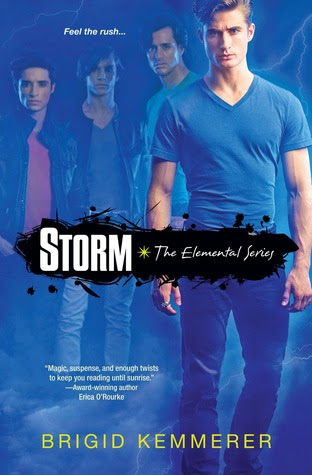 Storm by Brigid Kemmerer
Book One of the Elemental series
Publisher: K Teen
Publication Date: April 24, 2012
Rating: 5 stars
Source: Gift (this one and Spark) from my sister

Note: I read this book back in June 2012! I loved it so much, but I wasn't reviewing very much at that point, and was not blogging at all, so I never wrote a review. So, here's my review! Almost one year later.

Becca Chandler is suddenly getting all the guys all the ones she doesn't want. Ever since her ex-boyfriend spread those lies about her. Then she saves Chris Merrick from a beating in the school parking lot. Chris is different. Way different: he can control water just like his brothers can control fire, wind, and earth. They're powerful. Dangerous. Marked for death.

And now that she knows the truth, so is Becca.

Secrets are hard to keep when your life's at stake. When Hunter, the mysterious new kid around school, turns up with a talent for being in the wrong place at the right time, Becca thinks she can trust him. But then Hunter goes head-to-head with Chris, and Becca wonders who's hiding the most dangerous truth of all.

The storm is coming...

I LOVE THIS BOOK SO MUCH! It was one of my favorite books of 2012. Brigid Kemmerer an amazing author! I honestly didn't know what to expect when I started this book, but I was so surprised with what I got. Her writing style, the character development, the characters' relationships, the plot... everything was just so well done.

This particular book is focused on Chris Merrick, the youngest of the four Merrick brothers. He controls water, and, as you can guess, the other three brothers each control one of the four elements (earth, air, fire). I really enjoyed reading this book from Chris's point-of-view (it's in third-person, limited), and sometimes with Becca's point-of-view. At the time, I hadn't read many books in a guys point-of-view, so I remember that this blew me away (still does!). Chris is a fantastic character! He makes mistakes, he fights with his brothers, but he always does what he feels is best, in his heart.

Becca is PERFECT for him. For those of you on the Hunter bandwagon, join another. Hunter has his own book coming (Spirit!), so I think Chris and Becca are supposed to be paired up. Becca is feisty in a subtle way. Yes, there are some obvious scenes with her spunk, but overall, I got the feeling that she has so much fire in her, but she also has a lot of serenity to her.

The world-building of this book is amazing. I love the paranormal aspects of the four elements, and the plot that is woven around these aspects. It was easy to follow the plot, and the plot was not very predictable (which is good!).

Brigid's writing is SUPERB. I remember thinking, "How did she get the characters to sound so real!?". Seriously though - Chris sounds so much like a real teenager, with real angst and anger towards his brothers, and his reactions are just so, well, teenager-like (takes one to know one!). The same can be said about Becca, Quinn, Gabriel, and the other characters that played a significant role in this book.

While there are many, many characters, I feel like each had their own distinct voice, and experienced some sort of character development throughout this book. Michael is the legal guardian of his three younger brothers, and we as readers can clearly see his struggle with taking care of them, and keeping them out of trouble (both in school, and with the paranormal aspect). Nick is the quiet one that needs to keep the peace between his fiery (literally) brother Gabriel, Michael, and sometimes, Chris. Quinn is the snarky best friend of Becca, who is somewhat selfish, but develops as the book goes on. I feel like every character went through some level of character development throughout this book, which was excellent to see.

I really can't say much for this section. Almost a year later, and still remember this book very well (I did read and re-read it like, seven billion times though). Take your time with this one. Some people have complained that they were confused with the world-building, but if you read through this one slowly the first time, and maybe more than once, you will understand everything!