Happy Friday! Today I'm participating in the blog tour for Wicked Saints, debut novel by Emily A. Duncan. You'll find an excerpt at the bottom of this post! 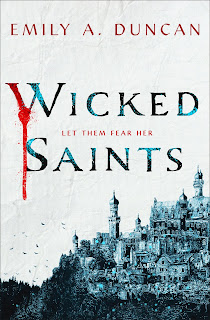 Wicked Saints by Emily A. Duncan
Book One of the Something Dark and Holy series
Publisher: Wednesday Books
Publication Date: April 2, 2019

A girl who can speak to gods must save her people without destroying herself.

A prince in danger must decide who to trust.

A boy with a monstrous secret waits in the wings.

Together, they must assassinate the king and stop the war.

In a centuries-long war where beauty and brutality meet, their three paths entwine in a shadowy world of spilled blood and mysterious saints, where a forbidden romance threatens to tip the scales between dark and light. Wicked Saints is the thrilling start to Emily A. Duncan’s devastatingly Gothic Something Dark and Holy trilogy. 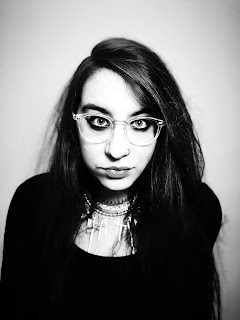 EMILY A. DUNCAN works as a youth services librarian. She received a Master’s degree in library science from Kent State University, which mostly taught her how to find obscure Slavic folklore texts through interlibrary loan systems. When not reading or writing, she enjoys playing copious amounts of video games and dungeons and dragons. Wicked Saints is her first book. She lives in Ohio.

Horz stole the stars and the heavens out from underneath Myesta’s control, and for that she has never forgiven him. For where can the moons rest if not the heavens?

“It’s certainly not my fault you chose a child who sleeps so deeply. If she dies it will very much be your fault, not mine.”

Startled by bickering gods was not Nadya’s preferred method of being woken up. She rolled to her feet in the dark, moving automatically. It took her eyes a few seconds to catch up with the rest of her body.

It wasn’t wise to tell the gods to shut up, but it was too late now. A feeling of amused disdain flowed through her, but neither of the gods spoke again. She realized it was Horz, the god of the heavens and the stars, who had woken her. He had a tendency to be obnoxious but generally left Nadya alone, as a rule.

Usually only a single god communed with their chosen cleric. There once had been a cleric named Kseniya Mirokhina who was gifted with unnatural marksmanship by Devonya, the goddess of the hunt. And Veceslav had chosen a cleric of his own, long ago, but their name was lost to history, and he re- fused to talk about them. The recorded histories never spoke of clerics who could hear more than one god. That Nadya communed with the entire pantheon was a rarity the priests who trained her could not explain.

There was a chance older, more primordial gods existed, ones that had long since given up watch of the world and left it in the care of the others. But no one knew for sure. Of the twenty known gods, however, carvings and paintings depicted their human forms, though no one knew what they actually looked like. No cleric throughout history had ever looked upon the faces of the gods. No saint, nor priest.

Each had their own power and magic they could bestow upon Nadya, and while some were forthcoming, others were not. She had never spoken to the goddess of the moons, Myesta. She wasn’t even sure what manner of power the goddess would give, if she so chose.

And though she could commune with many gods, it was impossible to forget just who had chosen her for this fate: Marzenya, the goddess of death and magic, who expected complete dedication.

Indistinct voices murmured in the dark. She and Anna had found a secluded place within a copse of thick pine trees to set up their tent, but it no longer felt safe. Nadya slid a voryen from underneath her bedroll and nudged Anna awake.

She moved to the mouth of the tent, grasping at her beads, a prayer already forming on her lips, smoky symbols trailing from her mouth. She could see the blurry impressions of figures in the darkness, far off in the distance. It was hard to judge the number, two? Five? Ten? Her heart sped at the possibility that a company of Tranavians were already on her trail.

Anna drew up beside her. Nadya’s grip on her voryen tightened, but she kept still. If they hadn’t seen their tent yet, she could keep them from noticing it entirely.

But Anna’s hand clasped her forearm.

“Wait,” she whispered, her breath frosting out before her in the cold. She pointed to a dark spot just off to the side of the group.

Nadya pressed her thumb against Bozidarka’s bead and her eyesight sharpened until she could see as clearly as if it were day. It took effort to shove aside the immediate, paralyzing fear as her suspicions were confirmed and Tranavian uniforms be- came clear. It wasn’t a full company. In fact, they looked rather ragged. Perhaps they had split off and lost their way.

More interesting, though, was the boy with a crossbow silently aiming into the heart of the group.

“We can get away before they notice,” Anna said.

Nadya almost agreed, almost slipped her voryen back into its sheath, but just then, the boy fired and the trees erupted into chaos. Nadya wasn’t willing to use an innocent’s life as a distraction for her own cowardice. Not again.

Even as Anna protested, Nadya let a prayer form fully in her mind, hand clutching at Horz’s bead on her necklace and its constellation of stars. Symbols fell from her lips like glowing glimmers of smoke and every star in the sky winked out.
Well, that was more extreme than I intended, Nadya thought with a wince. I should’ve known better than to ask Horz for anything.
She could hear cursing as the world plunged into darkness. Anna sighed in exasperation beside her.

“Just stay back,” she hissed as she moved confidently through the dark.

It took more focus to send a third prayer to Bozetjeh. It was hard to catch Bozetjeh on a good day; the god of speed was notoriously slow to answer prayers. But she managed to snag his attention and received a spell allowing her to move as fast as the vicious Kalyazin wind.

Her initial count had been wrong; there were six Tranavians now scattering into the forest. The boy dropped his crossbow with a bewildered look up into the sky, startling when Nadya touched his shoulder.

There was no way he could see in this darkness, but she could. When he whirled, a curved sword in his hand, Nadya sidestepped. His swing went wide and she shoved him in the direction of a fleeing Tranavian, anticipating their collision.

“Find the rest,” Marzenya hissed. “Kill them all.”

She caught up to one of the figures, stabbing her voryen into his skull just underneath his ear.

Not so difficult this time, she thought. But the knowledge was a distant thing.

Blood sprayed, splattering a second Tranavian, who cried out in alarm. Before the second man could figure out what had happened to his companion, she lashed out her heel, catching him squarely on the jaw and knocking him off his feet. She slit his throat.

Three more. They couldn’t have moved far. Nadya took up Bozidarka’s bead again. The goddess of vision revealed where the last Tranavians were located. The boy with the sword had managed to kill two in the dark. Nadya couldn’t actually see the last one, just felt him nearby, very much alive.

Something slammed into Nadya’s back and suddenly the chilling bite of a blade was pressed against her throat. The boy appeared in front of her, his crossbow back in his hands, thank- fully not pointed at Nadya. It was clear he could only barely see her. He wasn’t Kalyazi, but Akolan.

A fair number of Akolans had taken advantage of the war between their neighbors, hiring out their swords for profit on both sides. They were known for favoring Tranavia simply because of the warmer climate. It was rare to find a creature of the desert willingly stumbling through Kalyazin’s snow.

He spoke a fluid string of words she didn’t understand. His posture was languid, as if he hadn’t nearly been torn to pieces by blood mages. The blade against Nadya’s throat pressed harder. A colder voice responded to him, the foreign language scratched uncomfortably at her ears.

Nadya only knew the three primary languages of Kalyazin and passing Tranavian. If she wasn’t going to be able to communicate with them . . .

The boy said something else and Nadya heard the girl sigh before she felt the blade slip away. “What’s a little Kalyazi assassin doing out in the middle of the mountains?” he asked, switching to perfect Kalyazi.

Nadya was very aware of the boy’s friend at her back. “I could ask the same of you.”

She shifted Bozidarka’s spell, sharpening her vision further. The boy had skin like molten bronze and long hair with gold chains threaded through his loose curls.