Review: One Week to Score by Kate Meader 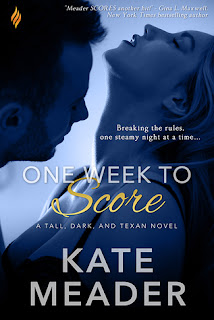 Even the Score was the first book I'd read by Kate Meader, and it was one of my favorite romance novels of 2015. Hunter and Tess's story was wonderful, romantic, and very steamy. I read Taking the Score and also liked it, though not as much as its predecessor. One Week to Score falls somewhere in-between those two novels! It was a fantastic conclusion to the series.

Twenty minutes before reaching the altar, Liv discovers her groom and her maid of honor getting it on. What was supposed to be the happiest day of her life turns into the worst day of her life. She's not heartbroken (her relationship with Peter was somewhat politically arranged), but she's angry. She decides to go on the honeymoon trip to Mexico anyway... and Flynn Cross decides to invite himself along. Best friend of her brother Brody, Flynn used to be one of Liv's favorite people, when they were younger. But now all they do is bicker and fight. But Flynn is determined to be there for Liv, and he doesn't want to see her do anything she'd regret later. He offers to be her sex buddy for the trip, since she's pretty desperate to get laid and forget all about the almost-wedding. But what is between Liv and Flynn goes so much deeper than the surface, and they'll have to face their past and realize that they've been in love with each other all along.

This book is somewhat similar, initially, to Down for the Count by Christine Bell, which is one of my favorite Brazen books of all time. Bride finds groom with maid of honor, bride goes on honeymoon, bride's former crush and childhood friend goes with her, things get hot. I loved Down for the Count, so I was sure I'd like this one too. Plus, Kate Meader's books are so great. Full of humor and steamy steam and realness, her books are so enjoyable.

I've wanted to read Flynn's story since reading book one! Flynn came from nothing, and was taken in by the Kane family when he was young. He's always felt welcome in the family, but in the back of his head, he's also always felt like a charity case. So he dropped out of Texas A&M and enlisted in the army. He communicated with Liv a lot, when he was in Iraq, but then an accident happened, and he cut off communication with her. She never knew why. From then on, the two of them could barely be in the same room together. Liv assumed the worst and Flynn never corrected her, and seven years later, they're always fighting.

Flynn is a charming, charismatic, sweet guy, and very obviously a romantic. It's clear that he's always loved Liv, but being in the army and then in a near-fatal accident messed with him. He never told Liv the truth, because he thought it was best for her. Liv is a bold, smart woman who doesn't like the box that her mother and her former fiance put around her. She doesn't want to be the wife of a congressman who doesn't want her. She's passionate and lively and she's always loved Flynn... even years later, after he stopped communicating with her with no reason.

Second-chance romances are always fun and sweet, but I especially love the hate-to-love ones. Liv and Flynn fight all the time, and their banter is so entertaining! I also love how silly the two of them really are, when they're not fighting. Sometimes they settle into old routines and the Liv and Flynn of the past shine through, and it's cute to see. Flynn was always the one to make Liv happy, and Liv always made Flynn feel worth it.

These two have such great chemistry! All the built-tension from over the years leaks over and explodes, and these two don't even get close to how much they want each other in the one week they were in Mexico, on Liv's "honeymoon". Lots of steamy scenes, though most are fairly short.

I like that the climax and ending are somewhat low on drama! Liv finds out some things, and there is a confrontation, and she's shocked at first. Flynn is the one that has to apologize and do the chasing, and it makes sense, in this story. I like how Liv handles everything overall. And I like that the whole thing was resolved intelligently and not too dramatically.

The humor was great! I liked how funny all of the books in this series was, how "real" the writing was, the voice of the book. There was something refreshing and real about the writing style.

Overall, a solid conclusion to this wonderful series! Hunter and Tess are still my favorite of the three couples, but I loved getting into the heads of all three Score men (Hunter, Brody, Flynn). I liked the epilogue of this book, giving us a sneak peek of the lives of Brody/Emma and Flynn/Liv. I just wish we could have seen Hunter/Tess as well.

This book is sooooo incredibly short. The eARC is only 139 pages. I'm used to stating my disappointment at how short Brazen novels are, but this one definitely felt short. I wish some of the steamy scenes were longer (I think there was only one "long" one - the rest were very short). All were well-written, and the book in general didn't feel rushed at all, but the book could have been longer.

4 stars. Like I said, this was a great conclusion to the series! I liked it, and the trilogy in general. I hope that Meader will write more Brazen books, though I will definitely check out her other published novels. She writes really hot romance novels with well-developed characters and a lovely side of humor!