Review: Beyond the Red by Ava Jae 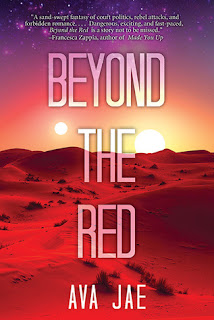 Alien queen Kora has a problem as vast as the endless crimson deserts. She’s the first female ruler of her territory in generations, but her people are rioting and call for her violent younger twin brother to take the throne. Despite assassination attempts, a mounting uprising of nomadic human rebels, and pressure to find a mate to help her rule, she’s determined to protect her people from her brother’s would-be tyrannical rule.

Eros is a rebel soldier hated by aliens and human alike for being a half-blood. Yet that doesn’t stop him from defending his people, at least until Kora’s soldiers raze his camp and take him captive. He’s given an ultimatum: be an enslaved bodyguard to Kora, or be executed for his true identity—a secret kept even from him.

When Kora and Eros are framed for the attempted assassination of her betrothed, they flee. Their only chance of survival is to turn themselves in to the high court, where revealing Eros’s secret could mean a swift public execution. But when they uncover a violent plot to end the human insurgency, they must find a way to work together to prevent genocide.

Kora is the queen of one of the Sepharon territories, Elja. She's the first female ruler in generations, and her people are calling for a new leader. They want her younger twin brother, Dima, on the throne. Kora has a plan to meet suitors and marry. Eros is a half-Sepharon, half-human man living in the desert among humans. He's never been accepted, except by his adopted family. When Kora's people attack his and take him prisoner, he has a choice: execution, or swear fealty. Eros is made one of Kora's personal soldiers and bodyguards, because she doesn't trust her guards (they have shown more loyalty to Dima), and no one would dare bribe a half-breed (they think he's an abomination). Things go from bad to worse when an assassination attempt is made on her betrothed's life, and she and Eros must run in order to save themselves - as well as humans, and Sepharon, from a greater threat.

Things that worked well - the setting and most of the science fiction aspects of the book. I loved the sandy setting of a planet nothing like Earth. I liked the set-up of the Sepharon kingdoms. The idea of the Sepharon is cool - they're aliens with weird markings on their skin, almost like permanent gold tattoos. Some of them have strange eye colors. They have a different color of blood too. The humans are like normal humans. The Sepharon enslave humans and basically strip away their humanity - it's horrifying. THAT was done really well too - the cruelty of the Sepharon to humans.

I will say that I never once thought to put this book, as it had me very much hooked. I kept reading and waiting for my questions to be answered - even at 95%, I was like okay... there's still time for a really thorough epilogue... I got nothing. Time for the next section of my review!

- Lack of resolution in the ending (is this part of a series?). Clearly this book wasn't written to be a standalone. Or, if it was, it is a very sh***y standalone novel that deserves 0.5 stars from me. I'm sure the author intends to have a sequel published, but as far as I know there is none that exists/will exists via the publisher... but I don't know this for sure. In any case, the ending wrapped up NOTHING. I have more questions than I started out with, about Roma and Eros's potential new role, about Eros and Kora, about the humans, the Sepharon, the pale man (who is he?). Nothing is explained!

If you know you're getting a contract for ONE book, why in the world would you half-write that one book, like you intend for there to be another book to follow?! That is SO rude! The author could have at least cleaned up the ending a little; making it somewhat open-ended is one thing (fine), but not answering anything, especially logistics questions? Not okay.

- Absolutely NO resolution in the romance (in terms of our lead pair); again, is this part of a series? Our lead pair has no idea where they stand. Kora and Eros kiss once, and then Kora freaks out and they don't speak and Kora ignores him and THERE IS NO RESOLUTION. Or symbolic scene of hope (like, the two of them reaching for each other's hands, or hugging, or looking into each other's eyes, or something). Nothing.

- Speaking of our lead pair -- instalove sets on really quickly. I cannot believe how quickly it seems that Eros's feelings change. Yes, she's attractive, and your body recognizes that. But his FEELINGS go from hatred (she did have his family murdered) to squishy tender caring. Hmmm. And vice versa! Kora falls for a half-breed who is, yes, hot, but also, a HALF-BREED, that everyone else finds unattractive. (Don't get me wrong - I have nothing against the fact that Kora finds Eros attractive; it's WHY that's bothering me. Literally EVERYONE else thinks his existence is disgusting.)

- I completley understnad that Kora is supposed to be very very attractive, but I find it so hard to believe that he falls for her, the woman who ordered the execution of his people. So implausible. Lucifer was supposed to be gorgeous, right? Doesn't make him someone I'd want to plant my mouth on, just saying.

- What I find even more unbelievable is how quickly it takes the lines to be blurred; the queen and her new, half-blood personal guard/slave get really close, like on a first-name basis, WAY too quickly. Like, DAYS after he is dragged to her palace. Really? Not plausible. In any type of hierarchy, especially when it comes to royalty, soldiers/servants do NOT address the royalty by their first name. EVER. I find it difficult to believe that mere days after Eros is brought to the palace, he is trussed up as a PERSONAL GUARD to the queen, and he's calling her "Kora". SHE can call him whatever she wants; he should not have the right to reciprocate.

- I'm trying to understand why Kora isn't disgusted by Eros. Literally EVERYONE else is. Sure, he's attractive. But that's not even what she notices about him. What whim caused her to take pity on him? She should be wary and distrusting - not invite him into her personal guard. I'm very confused by this (even if the reason she gave to Eros for forcing him to be her new personal guard was a tiny bit reasonable). I don't buy into Kora's alleged intelligence - she seems a bit dumb to me. She barely seems queenly half the time, and it often has nothing to do with Eros.

- Also, girlfriend is not as bada** as she seems. She lets her (younger) brother walk all over her. Dima is the Commander, as well as he's her second (the one to take her place if she dies or anything like that). It amazes me how many times he orders Kora to do something, and she does it. Go inside, Kora. Shut up, Kora. You can't do that, Kora. KORA. You are the f***ing queen. ACT LIKE IT.

- The presence of a love triangle (kind of -- though it resolves itself in the end; quite possibly the only thing that IS resolved is the triangle, because of what happens to one of the "legs"). It's a weird love triangle, but it's there. You have the betrothed (the one she "should" be with, the pure-blood prince), and you have Eros, the half-blood hottie. I like Eros. I feel bad for him. I liked the prince (Serik) too but I felt like he deserved better than Kora (Eros too, for that matter). It's also shockingly weird how quickly Serik FALLS IN LOVE with Kora (not lust - love; this was very explicitly stated).

- Weird insertions of made-up words that are supposed to be dialect or speak of the planet, but they were distracting, more than anything else. So distracting. I had to read lines twice and three times again because I couldn't catch the meaning, or because that one made-up word made me pause. Those words didn't flow well, with the story.

- Not to mention there were waaay too many modern-day references that stuck out like sore thumbs too. You can't blend 21st-century American slang with weird planet slang ("mo" for moment, "kinduv" for kind of, etc.). There were sooo many colloquial phrases that just did not fit in the book, and like I said, the weird slang dialect words the author threw in the book were also distracting.

- Above all, it would help to know if this were part of a series or not. Because then I would look past my first and second complaints, and this book would get another star. Big difference between 2.5 stars and 3.5 stars. But as we don't know about a sequel, I'm just going to give the (almost ultimate) punishing rating because I am NOT satisfied.

I do not recommend this book. It's not worth reading, especially since we have no idea if there will be a sequel or not. It wasn't the best-written story, and there were too many juvenile novice things that bothered me. Not to mention a HIGHLY unsatisfying romance and an infuriating ending. Did I mention the deus ex machina in the climax? One of my biggest pet peeves!

2.5 stars -> rounded down to 2 stars. Actually maybe it's just 2 stars flat. I want to say that I'll give the sequel a shot if there were to be one, but after writing this review, I'm not so sure. The more I think about this book, the less I liked it. Thank goodness it was fairly short!