Review: A Most Unlikely Duke by Sophie Barnes 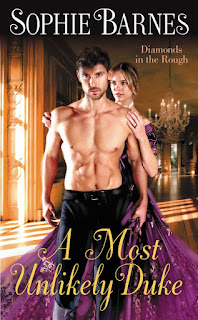 A Most Unlikely Duke by Sophie Barnes
Book One of the Diamonds in the Rough series
Publisher: Avon
Publication Date: June 27, 2017
Rating: 4 stars
Source: eARC from Edelweiss

I've read five of Sophie Barnes' previous books, and I think it is safe to say that this is my favorite of hers. Or perhaps this book is tied with The Trouble with Being a Duke, which was the first Barnes book I'd read. I'd been looking forward to reading A Most Unlikely Duke since Barnes announced the book's publication on her social media, and she did a post on the cover photo-shoot. I knew this would be a historical romance novel for me and I am so glad that it did not disappoint!

Raphe Matthews and his two younger sisters have lived by themselves in the slums of St. Giles for fifteen years. Raphe took up bare-knuckle boxing in order to pay off a debt his father left, and to take care of his sisters. One day, just after he accepts a deal to fight the best bare-knuckle fighter known to this underground business, Raphe receives an official letters from the solicitors of the Duke of Huntley... due to deaths and succession, Raphe is the new Duke of Huntley. He moves his sisters to the Huntley properties, but it's obvious that they won't fit in, given their mannerisms, speech, and disdain for society and the ton. But their neighbor, Lady Gabriella, is determined to see the girls succeed. Her older sister was a perfect lady but ran off with an American businessman. So Gabriella, once an awkward, bug-loving girl, must be the paragon of the ton. But she knows how it feels to be ostracized, and she won't let down down the new duke's sisters. But she doesn't expect to fall for the new duke himself, despite her resolve to stay away from him. Marrying into a family with a good reputation and lineage has always been her parents' goal for her, but Gabriella isn't so sure that she wants that. What she realizes is that she wants Raphe, rough background and all.

I'd been looking forward to reading this new book by Barnes, not only because she's a familiar Avon author, or because the cover is stunning (it really is!). The synopsis sounded fantastic! A rags-to-riches story with a young noblewoman helping the family find their footing and inevitably falling in love with the new young duke? Yes, please!

When I started reading the book, I grew a little uncertain, because of Gabriella's marriage situation. For Gabriella, the story starts with her and Fielding, the young earl who is courting her. Gabriella's parents have doubled her dowry, and Fielding has taken an interest in her. It is clear that Fielding and Gabriella's parents expect things to end in a marriage contract and a wedding. But Gabriella feels stifled by Fielding, and by her parents. Usually this sort of plot would bother me (in which the female protagonist is "engaged" or is courted by another). But it was so clear that Gabriella really did not want to interact with Fielding, and that she was forcing herself to be civil, because she knew how much this match meant to her parents and her family's reputation.

Basically, the involvement with Fielding was very little, because he had no romantic or sexual interest in Gabriella, and vice versa. On the other hand, as soon as Gabriella saw Raphe, even in his disheveled state, she was intrigued. Their first meeting was a little embarrassing for Gabriella and hilarious for Raphe.

Gabriella is a sweetheart, and so kind to the new duke and his sisters. Despite her parents warning her not to go to her new neighbors, she does so every day, to teach Amelia and Juliette how to comport themselves. And of course, she and Raphe collide and bicker. Gabriella is not a perfect, beautiful lady like she is trying to be - she is more intelligent and a little odd, compared to what society would force her to be. She and Raphe are a lovely pair.

There is only one sex scene in this book (BOOOO), but the chemistry between Raphe and Gabriella is very obvious and yet subtle. They get along very well (even with the initial bickering), and they grow to care for each other very deeply. But they have a lot of tension between them, which I'd been waiting... and waiting... and waiting, to see it all explode. That would be my one complaint - not enough sex scenes!

I loved the bond between Raphe and his sisters - it's a healthy and strong bond. Usually younger sisters are made out to be pompous, bratty, and irritating, in historical romance novels. In this book, Amelia and Juliette are quiet and kind, yet lively and spirited. They are also very respectful of Raphe and very aware of all that he has given up and done for him. They're about as old as Gabriella (i.e. not super young, but not terribly old either), and all three ladies become good friends.

This book has a lot going on, besides the budding romance between Raphe and Gabriella. Raphe and his sisters try desperately to fit into society, though most of the ton won't have them. And then there is Raphe's questionable past as a bare-knuckle boxer - what will happen when polite society finds out that its newest duke used to fight for money? And the deal that Raphe made - will he go through with it, as the new Duke of Huntley? Barnes really covers the whole nine yards in this book - nothing that was brought up in the beginning is left to be forgotten.

The ending is quite a good one! Raphe deserves his happily-ever-after for sure. Everything came together a little too neatly but I'm not going to complain because I'm just happy that Raphe is happy with Gabriella. I can't wait to see cameos from them in subsequent books!

Like I said, the only thing I would complain about is the lack of sex! There is only one sex scene in the book - at the very end, and it is so brief. Booo! Maybe I'm spoiled? I feel like most Avon-published historical romance novels that I've read have more than one sex scene (and that first sex scene is usually, errr, pretty detailed). More sex is (almost) never bad!

If you like historical romance novels, then this is a good one to try! I feel like I haven't been reading as many as I used to, so I couldn't tell you too many others that have published already for the year that I liked (maybe Mary Wine's Highland Weddings books that published in 2017 - those are good. Scottish historical romance though, not Regency.). In any case, this book was very good and hey, if you're not a huge fan of sex in romance novels (you like the sweeter/swoonier books versus the sexier ones), then this is definitely one for you!

4.5 stars -> rounded down to 4 stars. Still a good rating and still a good that I would highly recommend! With that beautiful cover, and a beautiful story to match, you can't go wrong. Watching Raphe and Gabriella fall for each other was so sweet and I kind of want to reread this book already!