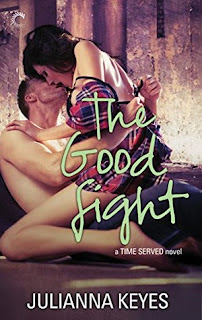 I was born a fighter. You had to be, to survive in Camden. Lucky for me, I loved it. The thrill, the pain, the glory. Until one night things went too far and I almost lost my ticket out.

So I swore off fighting. Never again. No matter how much I wanted it.

I went to college. Got a degree. A job on Wall Street. Yet I still wasn't smart enough to stay away. So now I'm back. And it's just as bad as I remember.

Enter Dr. Susan Jones, superstar neurosurgeon. She's brilliant, she's sexy and she's a pain in my ass. I can't get enough and she's too busy for a relationship. She wants to hook up, get off, go home. She doesn't have time for a thug from Camden. But she keeps coming back.

This place brings out the worst in people. Every day it threatens the project I'm working on, the plans I'm making. Every day it drags me down just a little more, until the hands I vowed to keep clean start itching to get dirty.

If I don't start fighting for what I want, I'll wind up with nothing.

I didn't come back to Camden for nothing.

I came back to start something. And when people hurt the things I care about, the gloves come off.

Oscar has been back in Camden for years, which makes no sense because people are usually trying to get out and stay out of Camden. He used to work in Wall Street, has a ton of money, and decided to move back where it all started. Oscar is an accountant by day, and he works out and sometimes fights at Oreo's gym in Camden. It's coincidence that brings Oscar to the hospital, where he meets Dr. Susan Jones. She intrigues him from the start, and he intrigues her. Susan is a bit robotic and mechanical, totally absorbed in her work and yet, somewhat cold and apathetic. But Oscar hasn't wanted someone this badly in a long time, and he doesn't back down from a challenge.

This book is written entirely from Oscar's first-person perspective! I was extremely excited when I realized this. I don't know why I didn't expect this, since Time Served and In Her Defense were both written in solely Rachel's and Caitlin's first-person perspective, respectively. Anyway, I really liked getting into Oscar's head, just Oscar, and not Susan. I'm not sure I would have found Susan very interesting, to be completely honest. Oscar, on the other hand, has always been very interesting.

I can't quite remember how I felt about Oscar in the previous books, but I adored him in this one. He's been struggling with himself, feeling unfulfilled and such. He's decided to buy a building in Camden and rebuild it into something positive for the dying community. He's also a hard-working account, and a good friend. He helps out everyone in any way. He seems rough on the edges, and maybe a little mysterious, but he's such a good guy.

We meet Susan in In Her Defense - she's Caitlin's sister. Susan is a top surgeon and workaholic. She's also a little detached, and has no empathy. She has an eleven-year-old daughter and she's finalizing her divorce, but it honestly seems like Susan doesn't care about anything. She's very robotic and wants to do things to be the best, like get an A in this or that. I totally get Oscar's frustrations with her. It's like she's not even human - completely devoid of feeling.

And yet, the two of them together are fireworks and dynamite. Susan is blunt and bold and has no filter - probably because she really doesn't think about what she says. Susan says what she wants and expects to get what she wants, and she's met her match in Oscar, who isn't chasing after her. In the end, they each do a little bit of chasing. They both make mistakes and they both have to apologize.

So I liked the progress of their relationship. I didn't love Susan like I loved Rachel (in Time Served), and I think I even like Caitlin (In Her Defense) more than I liked Susan, but I really like Oscar and I liked seeing Oscar and Susan fit together. Oscar humbles Susan, and vice versa.

This book is all about Oscar and how he changes and handles certain situations, and then changes some more. Oscar has demons in his past that he has to deal with, but nothing that really dragged the story down and detracted from the story, the character growth, the romance. Susan has her own personal problems, and I liked seeing some life breathed into her.

Slight side note - the cameo from Dean (our hero in Time Served)! Love! That was such a sweet scene. No Caitlin/Eli cameo, unfortunately. Or Rachel, for that matter.

Overall, I was really happy with this book. Not a favorite in the series (hard to beat Time Served, to be honest), but probably my second favorite? It's a tie between this one and In Her Defense. If this is the end to the Time Served series, then I'm quite content!

There is nothing huge that I did not like, though there is one thing that is bothering me. I don't want to go into details for fear of spoiling things, but there is a point in the book in which there is a newspaper article and a miscommunication, and basically Oscar doesn't get the credit he rightfully deserves. There was no real resolution to this part of the plot. I expected this part of the story to circle back and reappear, or at least get resolved concretely. It never did. I wanted to see Oscar get his credit, and it never happens. This is a small complaint, in the grand scheme of the story, but it felt very important. Especially since this affected both Oscar and Susan.

If you've read any of Keyes' adult books, I would recommend this one! All of the books in the Time Served series are VERY different from Undecided, which is a much more lighthearted book (it's also New Adult). So, if you're not an adult romance reader, or if you've only read Undecided, don't go expecting something like Undecided. Keyes's adult romance novels are very raw, gritty, primal, intense, and very steamy. Like, thirteen out of ten flames kind of hot. I highly recommend this book (and series) if you enjoy hot hot hot adult romance novels! There is no love triangle and it's not erotica, so don't worry if you're not into those types of things.

4 stars. Another great story by Keyes! And this one was really unique to me, because it was written in the male's POV, which I found very intriguing and refreshing. No dual POV, no female POV. Like I said before, if this is the end of the series, then I am satisfied! I hope not though. Jade and Wyatt have me curious...